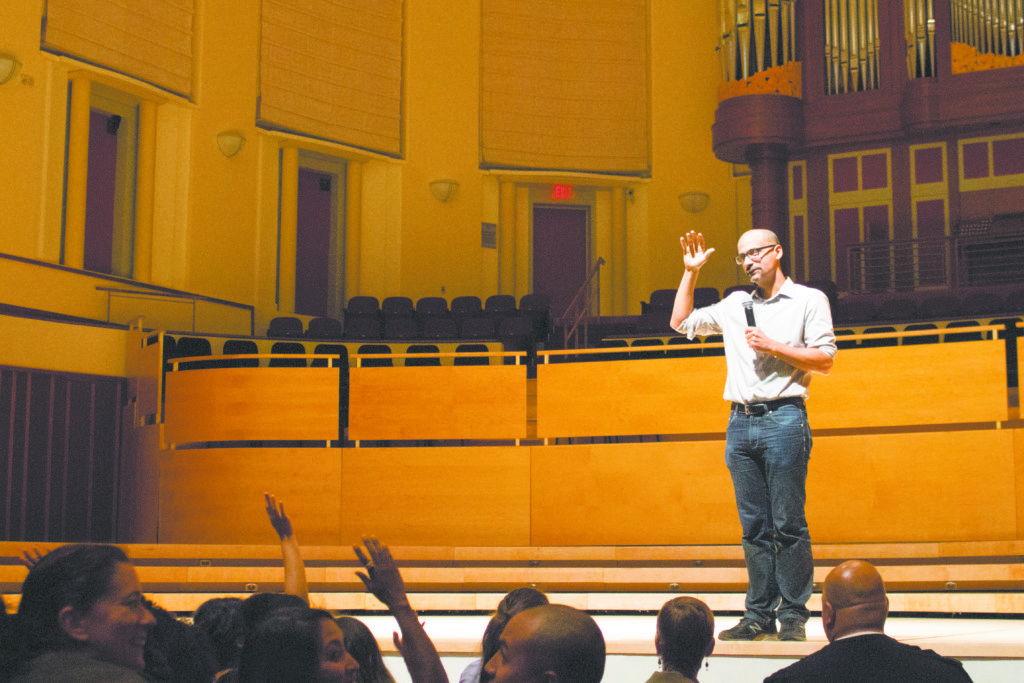 “The simple logic is that when a nation-state begins to talk about a wall, it is by necessity imagining an invader,” novelist Junot Diaz said to an audience of students, faculty and community members at the Goodrich C. White Lecture last Wednesday in the Schwartz Center for Performing Arts.

I found myself caught off guard by Diaz’s brevity — it was somehow surprising that a novelist known for his layered, multilingual writing, which often lends itself to footnotes and asides, could articulate with such poise and economy the story playing out on our political stage today. But then I remembered: the politics of race and immigration have always been Diaz’s territory.

Since releasing his first short story collection, Drown (1996), Diaz has established himself at the forefront of the literary world. Known for The Brief Wondrous Life of Oscar Wao (2007),  his works often concern the theme of the immigrant experience, one that is personal to Diaz as a Dominican-American who grew up in New Jersey. Top literary critics recognize Diaz’s ability to astutely hone in on what it means to grow up as the Other on American soil. And the Massachusetts Institute of Technology’s Rudge and Nancy Allen professor of writing has won just about every award a writer can win: the Guggenheim Fellowship, the National Book Critics Circle, a Pulitzer Prize and the MacArthur Foundation fellowship.

So, it seemed apt, expected even, that Diaz would spend the first 40 minutes of his lecture espousing his thoughts on the “invasion narrative” that is prevalent in today’s political climate, a story that has been “part of our folkloric repertoire for over 100 years.”

“The American invasion novel goes along a very predictable narrative,” Diaz said. “Black, Asian or Latino people somehow acquire military expertise that allows them to conquer the United States, and … the white heroes are able to finally overcome this invader by using a technology that permits them genocidal violence.”

Diaz, who recognizes that this dangerous narrative is deeply embedded in America’s ideals and sense of security, called for a more generative story.

“If we can’t figure out a way to not only undo that story, but find a way to mobilize a better story that has nothing to do with people of color being imagined as demonic horrible invaders, necessitating colossal violence, we are in serious trouble,” he said

But because Diaz’s lecture was applicable to current racial frontiers, derivative of Diaz’s tireless work commenting on these themes, it veered on the side of predictability. The lecture, therefore, fell short of what I wanted him to do — or rather, what I wanted to do— which was, of course, hear a new story.

After he wrapped  up his thoughts on the narratives of now, Diaz spent the latter half of the talk conducting a Q&A session, in which he urged Emory administration to become a “sanctuary campus” and told a student ally to reserve authorship of stories for those who are too often silenced from writing them.

But the most meaningful moment of the night came at the end, when an audience member asked what the “end game” is, recognizing that the nature of this country is founded on the exploitation of minorities.

“I don’t find any shame or demoralization of being part of the Great Disenfranchise. I find myself heartened by the fact that we are participants in a long legacy of struggle, that we have survived almost everything that has been thrown at us,” Diaz answered.

He urged the audience to not wallow in an ahistorical mindframe, reminding us that clocks only move forward.

“If the only community we have are the living, we don’t have a very good community,” Diaz said. “[Our ancestors] gave so much. We cannot dishonor their struggle by pretending that things haven’t shifted.”