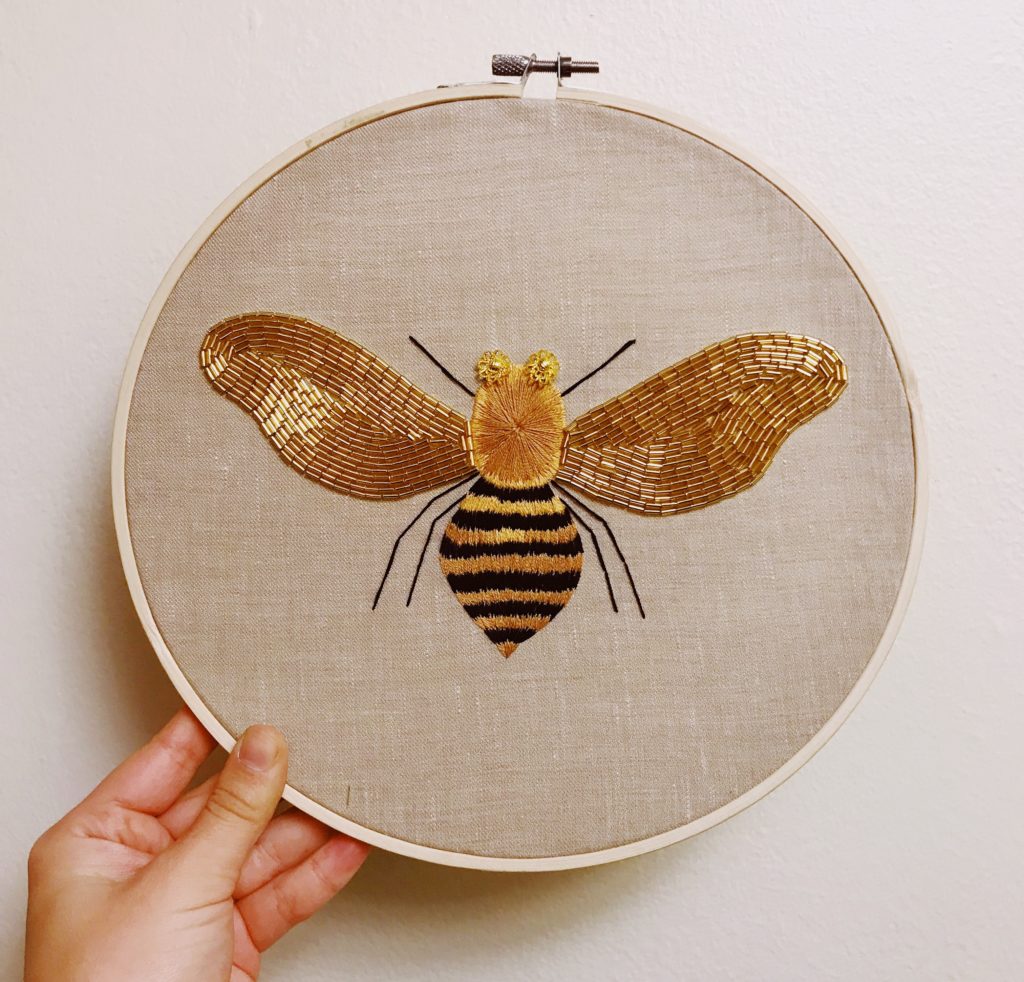 Maria McNiece (20B) began making needlepoint art in 2018. She has sold her work to customers nationwide./Photo courtesy Maria McNiece.

When Maria McNiece (20B) began making needlepoint in the summer of 2018, she never imagined sharing her pieces with anyone but friends and family. Now, the self-taught artist has sold about 20 original pieces at prices affordable to college students nationwide.

A dance and movement studies and business double major, McNiece first took up needlepoint after seeing displays at a Michael’s craft store. She also noticed a declining interest in hobbies in her hometown of Gainesville, Fla., and decided to explore one for herself.

“I always would go to art shows and be really excited about a piece, and then just feel like I couldn’t afford it,” McNiece said. “I wanted to make [my art] so people could have whatever they wanted on their needlepoint for a college student’s price.”

The cost of her pieces depends on the size of the loom, the amount of material needed and the time it takes her to complete them. McNiece has sold works priced from $5 to $80, compared to e-commerce websites like Etsy where large pieces run for around $150 to $180. She also said that each piece can take anywhere from four to over 60 hours to complete, and that she actively makes time in her schedule to work on her pieces because she enjoys it so much.

McNiece runs an Instagram account where she commissions her art and uploads pictures of pieces that are available for purchase. Although she profits from her creations, she still sees her artwork as more of a hobby.

“I think, sometimes, people have a pressure to capitalize on their hobby and their artistry, but that’s not my primary focus,” McNiece said.

McNiece’s pieces begin with fabric canvases secured by a wooden hoop frame. She then adds her designs using multicolored embroidery threads and beads.

“If there’s a specific project that I’m working on that’s really intricate and requires a lot of different types of thread or kinds of beads, then I’m at Jo-Ann Fabric [and Craft Store], like, once every two days,” said McNiece with a chuckle.

Despite feeling that her first few pieces weren’t very skillful, McNiece said she has never been dissatisfied with her work.

“I never valued perfection as an artist, so I never minded that I was bad at needlepoint at the beginning,” McNiece said. 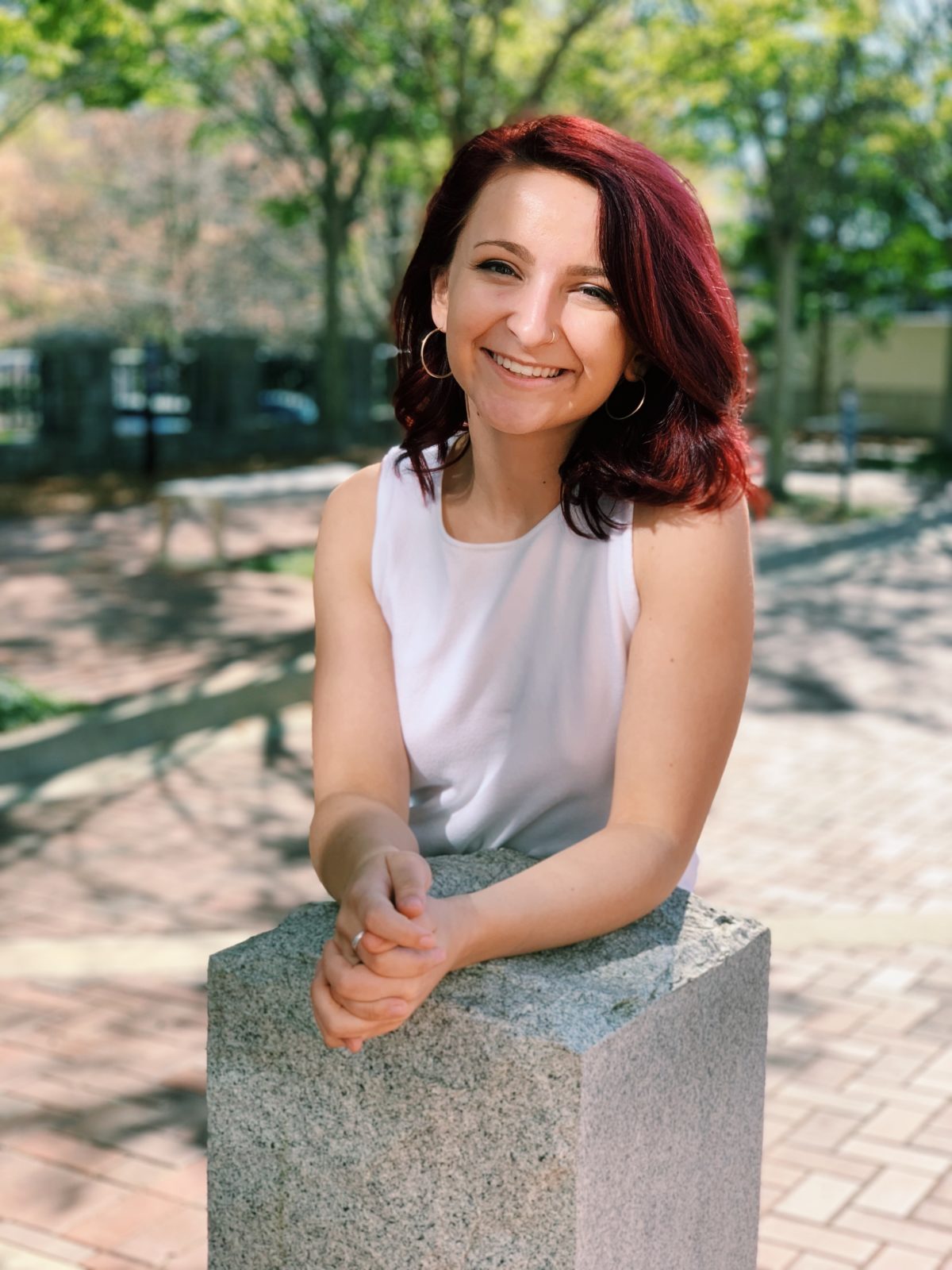 Many of her works feature natural motifs, including honey bees, oranges and lemons. She finds inspiration for her pieces from other needlepoint Instagram accounts, her daily life and dance routines, one of which inspired a piece on pomegranates.

McNiece often commissions duplicates because she can’t part with the originals, and has displayed some of her personal collection at this year’s Emory Arts Underground showcase.

“She’s really excited to have her work in other people’s spaces and homes,” Briggs said. “I think she’s really passionate about making people’s homes feel welcoming and beautiful.”

Briggs said McNiece is one of the most compassionate and driven students they have ever met. One of McNiece’s regular customers, Alana Davids, has already bought four pieces from her.

“[Her works are] personable, very detail-oriented, and, I mean, they’re perfect,” Davids said. “Whenever [my partner and I] walk in the door, we see the butterfly collection that she did for us, and that brightens our day.”

Despite her success, McNiece — who also serves as the president-elect of Emory Pride, vice president of AHANA Dance and co-captain of the all-female hip-hop Persuasion Dance Crew — says she doesn’t plan to turn her artwork into a full-time job. Rather, she hopes to continue creating art as a hobby.

“Being able to make work that makes other people excited, even if it’s not my personal aesthetic, feels really good to me,” McNiece explained.

While reflecting on her journey as a needlepoint artist, McNiece encouraged her fellow students to pursue their interests even when faced with obstacles.

“Don’t be afraid to try something and be really bad at it,” McNiece said. “Most of my pieces when I was first starting out were literally trash, and they were still really fun. There’s something to be said for doing something for [enjoyment], rather than for the production of it.”