Judah & The Lion Roars With Versatility 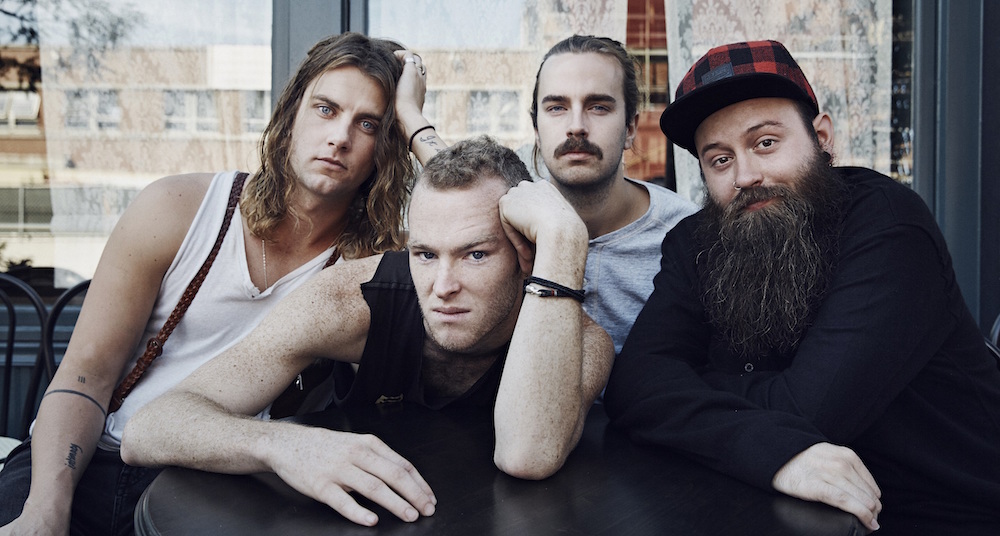 A sign of a great musical artist is versatility — the ability to explore new sounds and instruments so as not to get defined and limited by one genre. What is rare, however, is for an artist to successfully blend the lines between genres. The fusion of a myriad of distinctive sounds to create a cohesive song and album presents a challenge for most. But for Nashville-based band Judah & The Lion, it’s their starting point.

Despite growing up in different regions of the country, frontman Judah Akers, drummer Spencer Cross, mandolin player Brian Macdonald and banjo performer Nate Zuercher found each other and started to merge their diverse musical talents as students at Belmont University. The results were innovative and groundbreaking; their debut album, Kids These Days (2014), climbed to number four on the Billboard Folk Chart.

By blending together electric guitars, mandos, distortion pedals and gritty harmonies, Judah & The Lion is redefining what it means to classify music by anything other than what the song means to its listener. The title of their sophomore album, Folk Hop ‘N Roll, to be released on March 4 this year, gives justice to this multifaceted, refreshing sound.

Judah & The Lion will perform in Atlanta at the Variety Playhouse on March 11. The Wheel spoke with them over email about their college days, living in Nashville and plans for the future.

Hannah Conway: You formed at Belmont University. In what ways did that atmosphere augment your creativity? What advice would you give to aspiring musicians who are in college right now?

Judah & The Lion: Being around so many musicians made it easy to get involved. There were a ton of very talented people all around us, which surprisingly didn’t make it competitive. It just makes you want to work harder, because you know everyone around you is also working hard. It turns Nashville into an exciting, electric musical environment. If you’re an aspiring musician in college, spend a lot of time figuring out who you are as a musician; don’t get stuck comparing yourself — that can be detrimental.

HC: Your album, Folk Hop ‘N Roll, is dropping on March 4. In what ways does this album serve as a manifestation of your growth as musicians and as people?

JTL: It shows a lot of growth for us. We’ve continually been turning our sound into more of a rock ‘n’ roll thing … with electric guitar and wild effects … it shows more of our “big dream” mentality and our desire to share love with people.

HC: Folk, hip-hop and rock ‘n’ roll are generally very distinctive genres. In what ways is your newest album an attempt to blur the lines between these otherwise distinctive categories?

JTL: I think a handful of our songs are still a pretty similar feel. The content has changed a little, but the big thing we did to mix the genres was the instrumentation … putting a rock guitar with mando and banjo lines ringing out … or throwing the banjo through a distortion pedal. Things like that and using an old drum machine is a big part of what blurs the lines in the new record.

HC: The album cover of Folk Hop ‘N Roll depicts a fish cut in two. What is the significance of that image?

JTL: The meaning comes from two parts coming together to make a whole. Which is ironic cause the fish is dead … anyways, our friend Jacob Fulton made that artwork, and he literally went to the grocery store, picked out a trout and cut it in half. I’m pretty sure he would have fished for it if he didn’t live right in the middle of a major city.

HC: Your song “Insane,” off the new album, speaks to a universal fear of alienation. How do you hope your music evokes a genuine honesty in the emotions of your listeners?

JTL: That song is a great overall message to take away from the album. That song is very personal so I think it will come across as very honest, and hopefully, our listeners can relate to it. The main lyrics in the chorus are “I think we’re all goin’ Insane/hiding behind some smiling face/I don’t know if you can relate/but I fight the devil most of my days.” Judah and Brian wrote “Insane” based on a conversation they had about feeling social anxiety, loneliness, etc. We basically wanted to put everyone on the same level so they don’t feel like that’s something they are experiencing alone. Because in reality, everyone experiences it to an extent — we do, you do, I bet even Donald Trump does.

HC: Given that you all come from different backgrounds and cities, how has each of you brought something different to the band?

HC: Your band is currently based in Nashville, which is considered a global music hub. In what ways does Nashville impact your music?

JTL: I think living in Nashville has impacted our music in a big way, but a lot of the time our songs are written about places that we go.

HC:  Your name, Judah & the Lion, has clear religious connotations. How might those connotations influence your songwriting?

JTL: Our songwriting has evolved over the years, but we really want to write about life, love, something relatable and real. Hopefully it’s something that all different types of people can relate to.

HC: Given that you’re all relatively young, what is your long term vision for yourselves as musicians?

JTL: We would love to do this as our full time career for a long time. We all hope to have families in the future. Some balance of that sounds amazing to me.

HC: What are you looking forward to on this tour? How do you maintain the energy that it takes to put on a good show every night for such an extended period of time?

JTL: [We’re] looking forward to going back to some of our favorite cities, hopefully meet new people that haven’t been to our shows before and also see people that we know. It does take a lot of energy every night, but we get a lot of energy from the crowd.