JPEGMAFIA celebrates his birthday and the birth of ‘LP!’ at the Masquerade 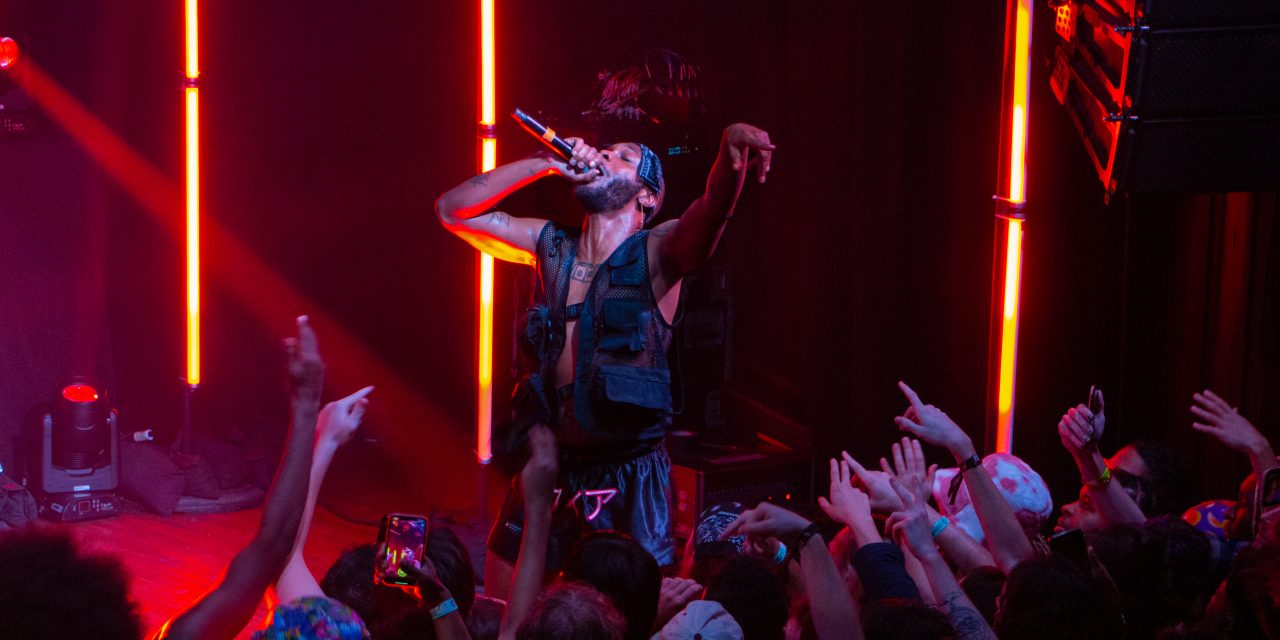 I heard “1539 N. Calvert” for the first time in my junior year of high school at a poorly-lit basement soirée. After asking about the song on AUX, some guy with longer, tousled hair and paint-stained denim retorted, “It’s JPEGMAFIA … he’s underground, so you probably won’t know him.”

That was the year Barrington Hendricks — professionally known as JPEGMAFIA, but more endearingly known as Peggy — released “Veteran,” and no amount of external gatekeeping could have kept that album out of my rotation. Between his experimental production, zealous rap style and defiant lyricism that subverted political structures, Peggy’s music possessed a rawness that was novel and awe-inspiring. 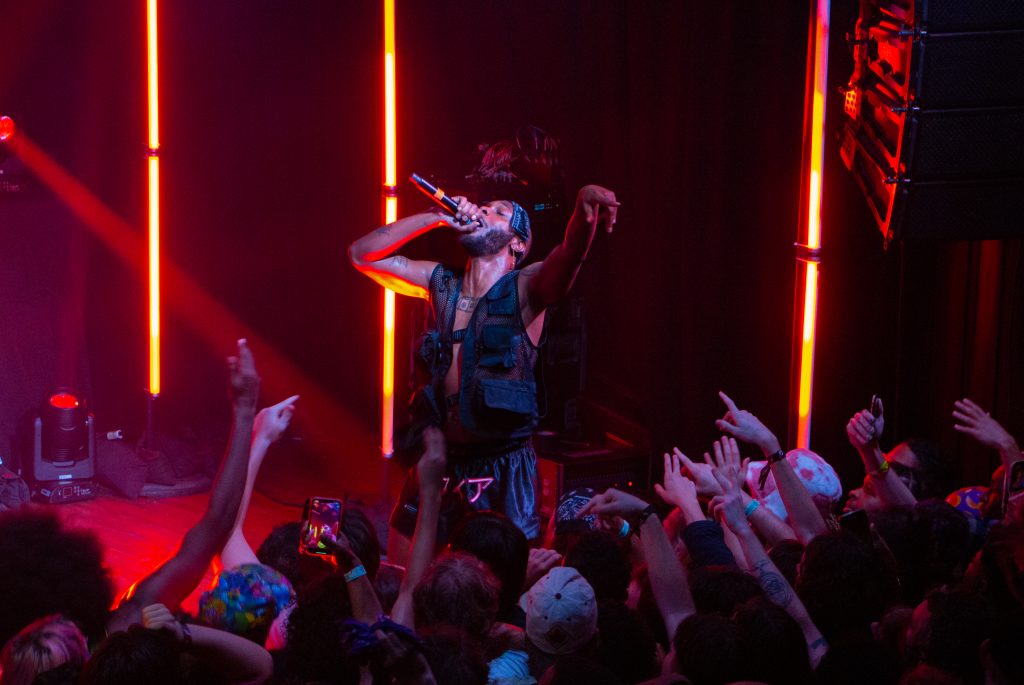 Nearly four years and four albums later, the Brooklyn-bred rapper seized the stage at the Masquerade venue in downtown Atlanta. Peggy came on for an after-hours show at around 1 a.m., and fittingly so: the whole set played out like a surrealist dream reminiscent of a religious experience.

When the lights dimmed, Peggy flew onto the stage, which was just adorned with a table and two laptops for his beats. The minimalism only magnified Peggy’s electric stage-presence when he opened with, “Jesus Forgive Me, I Am A Thot.” With fans counting him in with “HEYs,” he metamorphosed into JPEGMAFIA, bolting up to the crowd as they devoutly shouted every word back to him. Peggy was our deity tonight.

Sporting his signature paisley bandana, a “JP” branded utility vest and 5-inch shorts, JPEGMAFIA exhibited his playful wittiness when he asked, “Where the bald people at?” A fan ascended from the crowd, and JPEGMAFIA placed a hand on his naked head: a tender christening. It was the perfect segue into his track “BALD!”. As soon as the airy instrumentals faded in, the crowd ecstatically sang; his fans alone carried the song to finish. 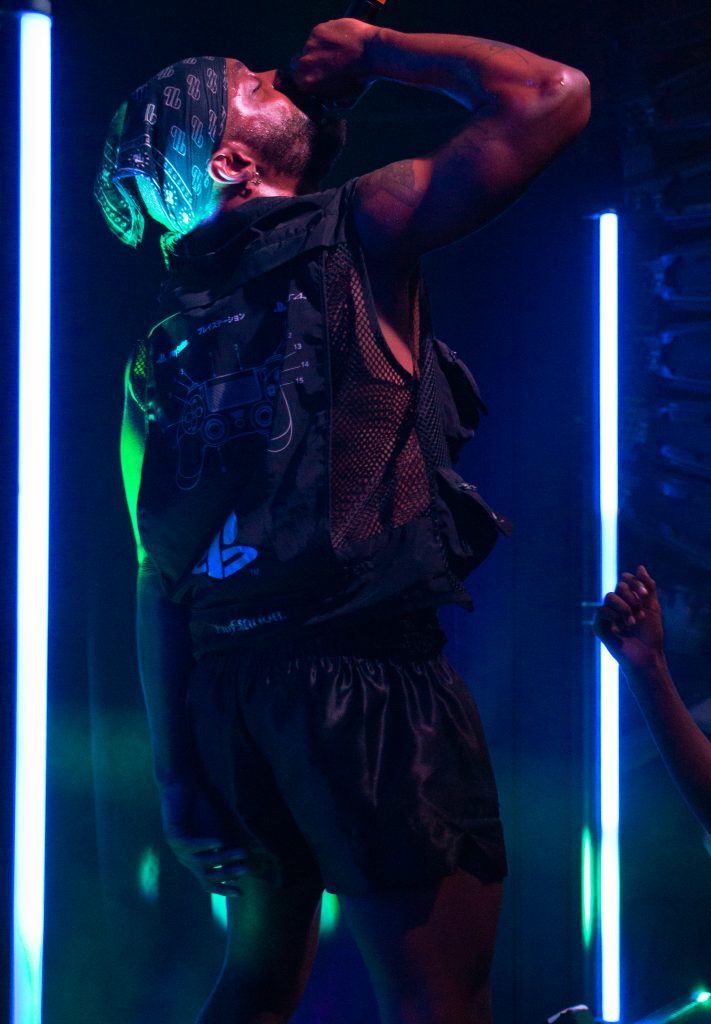 In a conglomeration of distorted glitches, textured bass and jumpy instrumentals, JPEGMAFIA’s avant-garde sound rocketed off of every wall, and dissonance never sounded so heavenly. Apparent in “I Cannot Fucking Wait Til Morrissey Dies,” Peggy performed his duly abrasive and self-explanatory track, and I saw first-hand the fiery, unapologetic rapper that his fans revere so much. The crowd was moved in unity by Peggy’s fervid confrontation of the figures we collectively hate most.

His Atlanta show date doubled as the “LP!” release date and his birthday. Indulging in a bottle of Laurent-Perrier Champagne just before, JPEGMAFIA possessed a comfortability that translated into his movements. His dancing ranged from fluid to explosive to fabulous. One of the most memorable moments was when he was reduced to the stage floor, profoundly lying in a fetal position. Just when I thought the absurdism was at a peak, two large men sauntered on stage in skeleton makeup and a mask depicting Maxwell Jacob Friedman (MJF). Nobody could have anticipated when skeleton-man (who was actually Darby Allin) and Peggy lifted MJF and proceeded to suplex him into a table, destroying it past no return. The bit was undoubtedly the pinnacle of the night’s surrealism and has now been ingrained in my memory. 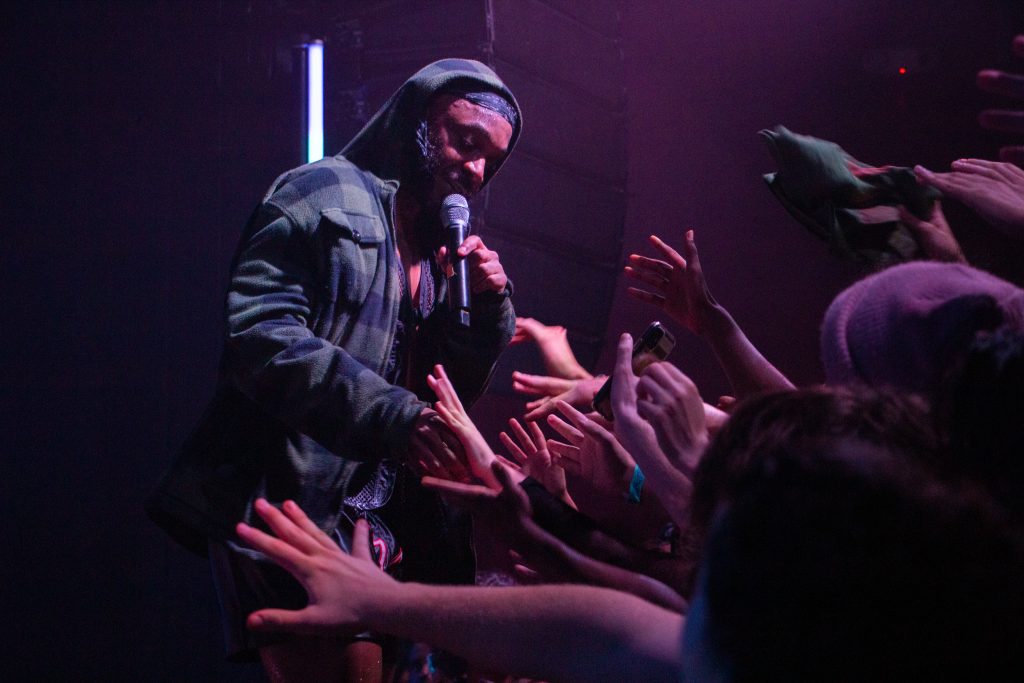 It is an incredible sensation to attend a show where the fans love the artist just as much as their artist loves them. JPEGMAFIA frequently interacted with the crowd, dapping-up people in the front row and even taking a fan on stage. The crowd reciprocated his kind energy in serenading JPEGMAFIA with “Happy Birthday”: an acapella in celebration of his 32nd. The atmosphere was especially intimate during the penultimate song “Free The Frail,” where the only light source in the venue was from a multitude of cellular flashlights raised to the air.

Concluding with his grimey track “Rainbow Six,” JPEGMAFIA hunched over in exhaustion as fans ruptured in cheering. Glistening in sweat under the bright stage hues, he had left nothing on the table. From blasting “Veteran” through my headphones in high school to experiencing his galvanizing presence in real time, I speak on behalf of everyone there when I say I was moved to sublimity at the night’s closing.

Thank you Peggy, and happy birthday. 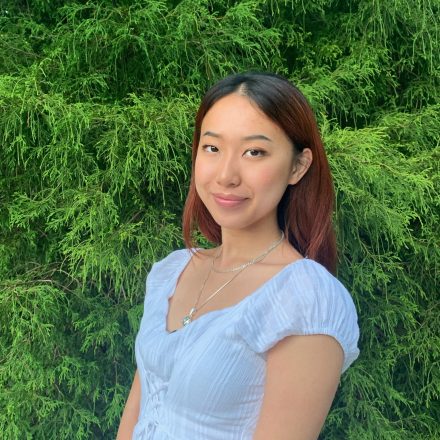