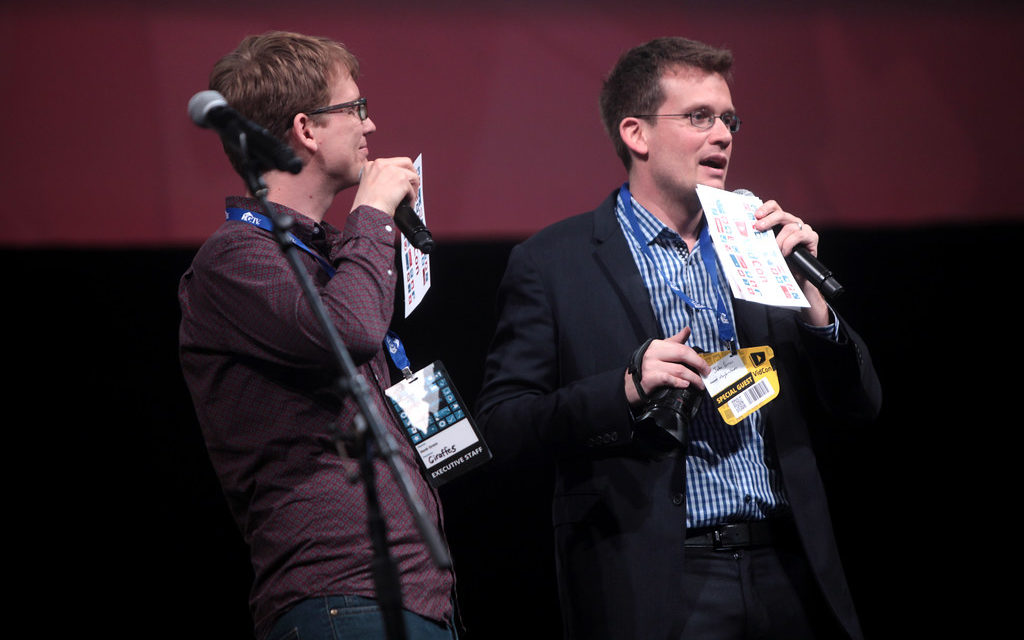 Podcasts are nearly always an audio-based artform; however, the Green brothers John and Hank brought their shows “The Anthropocene Reviewed,” “Delete This” and “Dear Hank and John” to live audiences in St. Petersburg, Atlanta and Raleigh. Longtime fans of both the podcasts and the brothers’ other work gathered at the Ferst Center at the Georgia Institute of Technology to experience the emotional performances together. The profits from the tour went to the Partners in Health organization tasked with bolstering the public health infrastructure in Sierra Leone.

While the podcasts were the highlight of the minitour, there were also transitional acts where Steve the minotaur (who was definitely not just Hank wearing a mask) would talk in a poorly executed British accent. His appearances not only included a debrief of the upcoming segment, but also commented on public events and information regarding Partners in Health before introducing the next speaker. Steve managed to inject an extra layer of humor to an already humorous show with slapstick and silliness, as opposed to the inside-joke laden main events that followed.

“The Anthropocene Reviewed” with John Green

“The Anthropocene Reviewed” featured a stoic-looking John Green reading from a handful of papers as he reviewed “Auld Lang Syne,” the popular New Year’s Eve song, on a five star scale. While it may seem odd for John Green to dedicate an entire portion of the Minitour to a song that most people forget the words to every year, it is a comparable topic alongside the other aspects of the human-centered world he has reviewed on the show previously. His reviews have included Diet Dr. Pepper, Halley’s Comet and the Taco Bell Breakfast Menu among other strictly human topics.

“The Anthropocene Reviewed” may seem like an educational show to match the Green brothers’ “Crash Course” Youtube series, but it included the most emotional portions of the show. These moments included John recalling his time as a news writer in Chicago and the impact his late mentor, Amy Krouse Rosenthal, has had on his life from his start in the industry to the longevity of his brand loyalty to Adidas sneakers. John relates his own life to a topic with which the audience is familiar in a way that is incredibly relatable.

John Green finished this portion of the Minitour by having the audience sing “Auld Lang Syne” with him, bringing us together and lifting us from the air of nostalgia that settled over the audience.

“Delete This” with Hank and Katherine Green

“Delete This” is a behind-the-scenes look into Hank and Katherine Green’s marriage as they discuss and critique both Hank’s tweets from the week and the goings-on of Twitter as a whole. The conversation between the two ranged from Hank mansplaining boobs to the SPF value of beards. This segment was bolstered by the projector screen spanning the space above the couple’s heads, as the audience was able to read the tweets alongside the hosts.

At one point, the audience was able to participate in a Twitter game by responding to the phrase “I love Georgia because…” and hitting the autocomplete suggestions on their keyboards to create a phrase that should result in a slight chuckle. I really enjoyed the interaction and found my autocompleted sentence intriguing: “I love Georgia because I’m not going through this semester, but I’m gonna get the whole day done.” The true humor from this segment came from seeing the whole audience’s replies at once, which reinforced the feeling of community that underscored the entire show.

The strength of Hank and Katherine’s segment came from the ease of conversation between the couple. Their contagious energy and excitement overflowed into the crowd, leaving a flood of laughter throughout the Ferst Center.

While the previous two segments of the show featured the Green brothers in their separate podcast endeavors, the finale featured the duo in all of their quirkiness. “Dear Hank and John” focuses on Hank and John’s answers to questions sent in by listeners, or in the case of the live-show, audience members. The advice included words of wisdom to an aspiring author, how to choose a personal, but not embarassing Twitter handle and how to approach a conversation with a stubborn peer. The content of the podcast could stand alone regardless of the hosts, but the Green brothers bring their special flare to the show that could not be emulated elsewhere. With the audience participation of live question-asking, “Dear Hank and John” finished the show with vivacious laughter.

The Green Brothers’ Minitour was an opportunity to experience live what, for most of the audience, has previously only been an audio-only experience. And while all the content shared during the show will be made available to the rest of the community, reducing childhood and maternal mortality abroad through the Partners in Health project made the experience an entertaining way to give back.