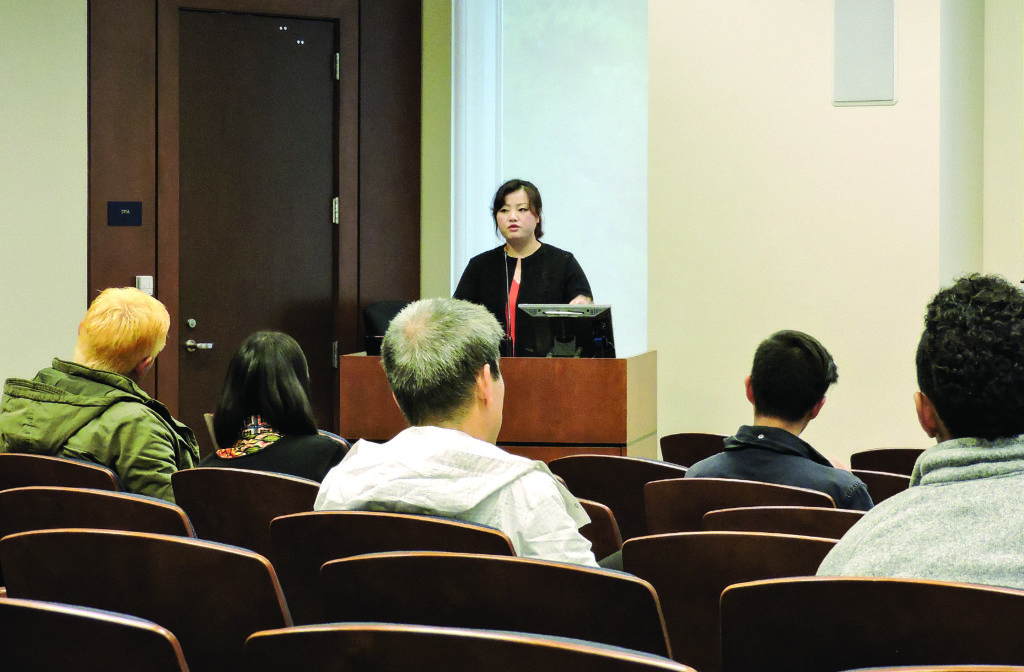 The first time Jinhye Jo tried to escape North Korea, she and her family turned back because her mother was too weak to walk any further. An open wound on her skull become so infected that bugs were beginning to crawl around it, Jo said.

Jo’s mother received the injury from North Korea’s State Security Department (SSD) officers, who beat her with wooden rods and forced her family to watch. Jo’s mother had verbally blamed the government for her newborn boy’s death, according to Jo.

“She was sitting there…crying and then blaming the government,” Jo said. “‘Why [have] these kind of people killed my whole family? Why [would] they do this kind of stuff?’”

The SSD imprisoned Jo’s mother for treason, but she escaped several days later, determined to leave the country with her family. The baby was not the family’s first loss; the family lost a 16-year-old daughter to sex trafficking in China and a father to torture.

By the time Jo’s mother was healthy enough for a second escape attempt, Jo’s grandmother had grown weak from starvation. When Jo’s grandmother passed away two months later, the family began their second journey to the border, Jo said. Though Jo, her mother and her seven-year-old sister could walk without shoes, they had not eaten for two weeks and were too weak to carry Jo’s five-year-old brother. They left him with friends before crossing the border and promised to return with food. They never saw him again.

Now 30 years old, Jo has resided in Duluth, Ga. with her mother and younger sister for the last 10 years. Jo said she spent the first 10 years of her life in North Korea before escaping to China, where she lived in hiding for 10 more years.

Unable to legally attend school in China due to the threat of deportation, Jo said she received much of her education from a pastor named Yo-Han Yoon at a nearby Christian school. Meanwhile, she worked as a waitress to provide for her family. She was deported from China to North Korea four separate times, but was able to escape each time. Her family came to the United States in 2008 after seven months in North Korean prison. Yoon, who had returned to the U.S., bought the family’s release with a fundraised sum of $10,000.

Jo said that she is glad she settled in the U.S. rather than in South Korea, and cited the United States’ educational opportunities and ease of social assimilation.

“Lots [of] North Korean defector[s], when they come to the China, they tell me, ‘In South Korea, the people look so beautiful…they’re like … movie [stars],’” Jo said. “But for North Koreans, when we go there, [we] look totally different.”

In July 2008, shortly after Jo came to the U.S. with Yoon, former U.S. President George W. Bush invited Jo and eight other refugees from different foreign countries to the White House. Though Jo said she was reluctant to attend the event, a member of her church convinced her and paid for her ticket.

Since refugees were allotted just two minutes each to speak to Bush, Jo typed up a thick pamphlet to give him.

“[He] said, ‘What [do] you want to do?’” Jo said. “And I said, ‘Please stop sending any food, anything, to North Korea, and then please rescue North Korean defector[s] in China.’”

Though the meeting ended abruptly, Bush accepted Jo’s pamphlet. Determined to bring attention to her cause, Jo travelled to China during the 2008 Beijing Olympics and held a 16-day hunger strike at the Chinese embassy.

After the Olympics, Bush travelled to South Korea and Thailand and made the news with mentions of the North Korean refugee crisis. Inspired by the results, Jo founded NKinUSA with support from her church members.

Based in Washington, D.C., NKinUSA works to raise funds to support increasingly expensive rescue efforts. The organization works to rescue refugees from China and North Korea, and aims to provide food, housing, employment, education and translation services for refugees living in the U.S.

Jo said she was able to overcome obstacles with the help of friends and mutual friends. Nowadays, she gives more help than she receives. One frequent recipient of Jo’s assistance is her mother, who had the most difficulty of Jo’s family adjusting to life in the U.S.

When Jo’s mother faced difficulties with her bank, Jo had to translate her mother’s North Korean to South Korean, so that an official South Korean translator could relay the meaning to the bank representative. People who have lived in the U.S. their whole lives often struggle to understand how North Koreans’ needs differ from those of South Koreans, Jo said.

“Even [though North and South Korea] speak same language, there is [a] different accent and a lot [of] words [are] different because 70 years [have] divided [us],” Jo said.

Chloe Pak (19B), a Korean-American student, said she attended the event to better understand her family history and to further her dramaturgical research. Pak, who is interested in directing plays, said her maternal great-grandmother escaped North Korea before the Korean War. Most of Pak’s current knowledge surrounding North Korea comes from the media, which often fails to cover human rights.

“Human rights violations need to be more talked about and more on the forefront of our minds when we think about North Korea,” Pak said. “It seems to be a neglected subject as far as the media is concerned. There needs to be more awareness.”

LiNK Emory President Eddie Park (19B) decided to host Jo at Emory after he received a proposal from an NKinUSA representative. He expressed hope that the event reinforced LiNK Emory’s mission statement of raising awareness of the North Korean human rights crisis.

“[At] LiNK…oftentimes, we get so caught up in hosting fundraisers and…[managing] the organization that we forget our greater mission,” Park said. “But hearing someone talk about the actual struggles that they experienced… definitely pierces another barrier through people. It really lets them know that this is something that’s affecting a lot of people out there.”

Despite the difficulties she has faced while adapting to life in the U.S., Jo said that she believes refugees can be happiest here. Currently, about 220 North Korean documented defectors and over 600 undocumented refugees reside in the U.S., according to Jo. Over 10 of those defectors live in Georgia.