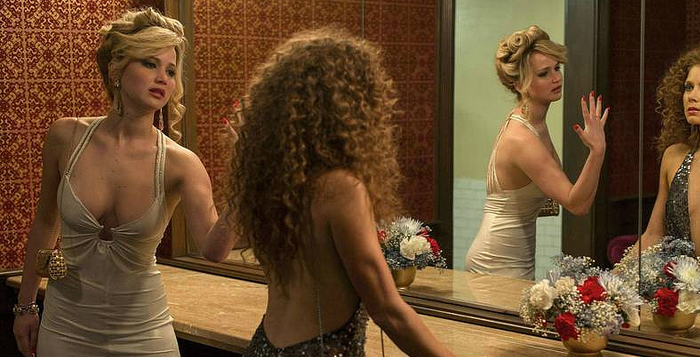 Sometimes I think about the ‘real world’ after college, and I’m sure that other people are better prepared for it than me. I worry that employers won’t see the value in my talents of napping and decorating. Or that my passion for snacks may get me fired for leaving the office one too many times. I wonder if it would even be possible for me to make it through five consecutive days without yoga pants. And what about my fancy for rainbow nail designs? I’m pretty sure those are frowned upon after … well … the age of 16. When I look out at the ‘real world,’ I’m afraid I just won’t fit in.

At the exact moment that I’m about to give up on my future and succumb to a lifetime of unemployment, I spy a very last beacon of hope. She’s a 23-year-old Academy Award winning multi-millionaire, but underneath it all, she’s just like me.

When I first encountered Jennifer Lawrence, her Oscar, emerging style-icon status and starring role in one of the highest grossing film series of the past few years, it lead me to believe, “Wow, this girl really has her stuff together.” But within a few quotes, I uncovered Jennifer’s more “me-like” self:

1. “I’m going to read the book again. I’d like to refresh. Or I’ve just never read it. I’m going to get the audio tapes.” – On getting ready for the next “Hunger Games” film

2. “I sent her a text message that was like six inches long.” – On texting Taylor Swift

3. “If I don’t have anything to do all day, I might not even put pants on.” – On what she does in her free time

4. “After it’s 11, I’m like, ‘Don’t these kids ever get tired?’ When I’m out, I think about my couch. Like, ‘It would be awesome to be on it right now. I bet there’s an episode of “Dance Moms” on. Am I missing a new episode of “Keeping Up With the Kardashians”?’ I’m just stressed by the idea of missing them.”

5. “That’s how I can go about life free as an idiot: because I have no idea what I’m doing.” – On why she’s carefree

6. “Reality TV is my silver lining. At the end of the day there’s probably nothing that makes me feel better than junk food and reality TV.”

9. “He was at a party, and I turned into a perverted guy. I was like following him into rooms and staring at his a– … He asked me if I was on mushrooms and I said, ‘No. I’m dead sober. This is just me.'” – On meeting John Stamos and stalking him at a party

10. “Well at least I had on underwear.” – On her Golden Globes wardrobe malfunction

Jennifer Lawrence gives me hope. Hope that one day I might actually make it in the ‘real world.’ If this mega-successful star can manage an ultra successful career, procrastination, an adoration of food and television and a motto of ‘Fake it ’till you make it,’ maybe I can too.