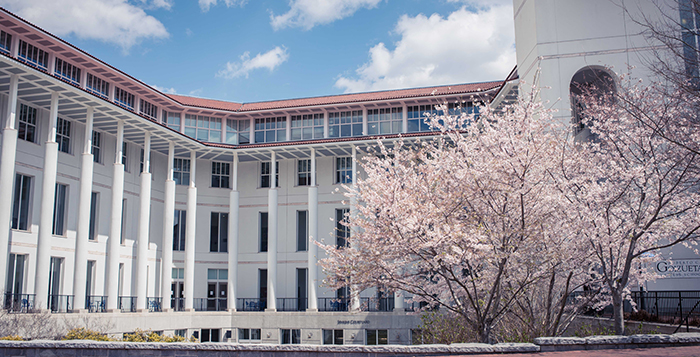 James, who was appointed dean on May 19 and assumed the position on July 15, was inducted under the category “first,” as her appointment marks the first time a black woman has become the dean of a business school with one of the United States’ top 25 MBA programs, accord- ing to the Association to Advance Collegiate Schools of Business.

James said she’d have to miss the annual gala event for the inductees, which takes place at the AVALON Hollywood concert venue in Los Angeles on Nov. 19., as her schedule would not allow it.

Hershatter, who called James’ induction into the Power 100 list “just wonderful,” recalled James’ student group and faculty engagement, roundtable discussions, film screenings and contact with alumni nation-wide as some of what James has done in her four months as dean.

“I think she’s going to be an amazing dean for Goizueta in the long- term,” Hershatter said.

Before becoming Goizueta’s first African American female dean, James served for two and a half years as president and owner of the Crisis Management Institute (CMI). The CMI produces annual reports of crises and provides crisis management training courses for firms and organizations. She sold the institute prior to her move to Goizueta.

James, who earned her Ph.D. in Organizational Psychology from the University of Michigan in 1995, also served as the senior associate dean for Executive Education at the University of Virginia’s Darden School of Business for almost two years.

At Darden, she created the Women’s Leadership Program, a one-week program providing leadership training sessions and executive feedback, as well as the new position of Associate Dean of Diversity – a title she held – which fosters diversity among students and faculty at the University of Virginia business school. At Goizueta, she said she is working with the business school’s Assistant Dean of Diversity Alicia Sierra “to have an expansive pool [of applicants] for faculty and staff positions.”

“We clearly have some opportunities to continue with the ongoing effort on the diversity front,” James said, adding that diversity and women’s issues were “two areas I’m very passionate about.”

Her career, she said, shouldn’t be impacted much by the Power 100 list, other than the visibility factor. Though, James added that she was a bit embarrassed – “If you look, you’ll see I’m right by Pharrell [Williams],” she said.

James’ induction into the Power 100, according to Hershatter, is “an affirmation of what she has already done for her career.”

“I’d mark this down as a very good week for her,” Hershatter said.