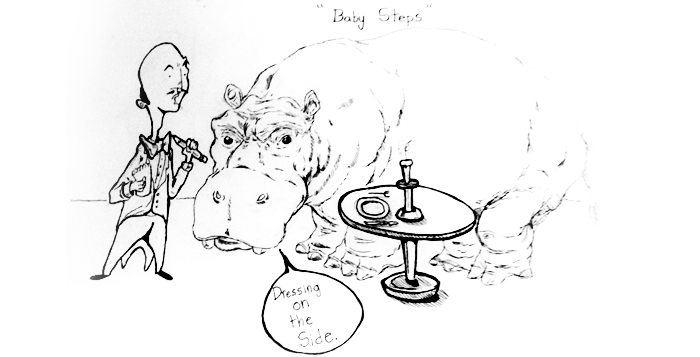 Zachary Elkwood is a member of the Class of 2015. His cartoons appear in every Friday issue of the Wheel.

Most of the morbidity and mortality in societies is due to individual behavior. Individuals usually enhance their health by either avoiding risky behaviors (e.g., smoking) or adopting healthy behaviors (e.g., physical activity). These behaviors have led to increased interest in individual-level interventions that address health problems through lifestyle change. However, new orientations in health promotion interventions have included community action through the use of health education. Moreover, community-level interventions use lifestyles and environmental changes to promote behavior changes, which are able to address health problems. Health promotion programs should include not only actions to strengthen individual skills but should also focus more heavily on community efforts to change social and physical environments into healthy environments.

The need for community-level intervention can be seen when looking at strategies used for HIV risk reduction. For example, Health Intervention Project (HIP), a community-based program, targeted African-American female drug users in order to reduce the risk of HIV infection. This project explores the difference in results between women’s individual characteristic intervention as opposed to community intervention.

Several women gave up crack cocaine by ending individual social relations and changing their daily life structures. However, women who were part of a 12-step community program were more likely to stop cocaine use and injection drug use. This is because these women were provided with positive reinforcement and social support.

Furthermore, some participants have said that the absence of community organizations, youth/elderly associations for health and social services were problematic. This is because individuals within these social networks or systems acquire information, change attitudes, develop beliefs, acquire skills and practice behaviors which eventually will have positive influence on changing bad behaviors. The community-level intervention assumption is that individuals make up large and small social networks or systems in order to promote health.

Community level interventions are more promising for addressing health problems and improving health because of the possibility of modifying the social environment. A study about the prevalence of coronary heart disease (CHD) risk factors found a 50 percent decline in the CHD mortality rate with the implementation of a community based CHD prevention intervention program community-level interventions are done to improve health outcomes by reducing the populations’ overall risk rather than just the individual risk. They further aim to decrease the disease burden through risk reduction strategies across community.

Moreover, community level interventions are aimed to reduce CHD risk factors, which are cost effective and a possible approach for reducing CHD rates and associated morbidity in the community.

However, community-level intervention, which is designed to create healthy social environment, is still in need of more development in terms of research because there is a lack of understanding of concepts, a lack in interventions that bring social change as well as a lack of feasible methods.

Therefore, until we have more of an idea about how to increase understanding of the individual level approach to intervention, community-level intervention should be used.