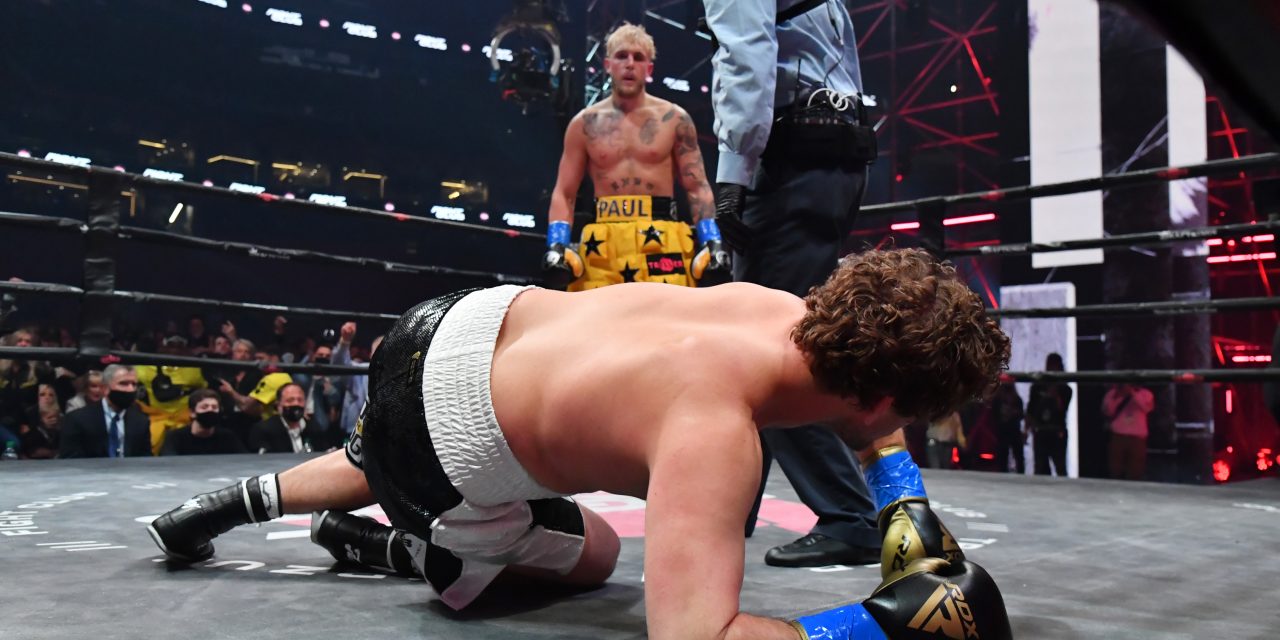 Sports fanatics, celebrity “stans”’ and entertainment consumers alike turned their eyes to the first-ever Triller Fight Club event this past weekend. The Mercedes-Benz Stadium in downtown Atlanta, home of the Atlanta Falcons and Atlanta United FC, was transformed into a festival-like venue with a boxing ring in the center and a concert stage beside it.

The night consisted of several events leading up to the headline fight . The main bout was between YouTuber-turned-professional-boxer Jake Paul and former UFC and MMA fighter Ben Askren, who came out of retirement for the match. The top fight on the undercard was a super lightweight fight between boxers Regis Prograis and Ivan Redkach.

Leading up to the fight, the boxers held press conferences on April 15 where they answered questions from the media and took their best digs at each other. As a former Disney Channel actor and vlogger, Paul’s boxing career did not begin until fairly recently in 2018. With his recent rise to boxing fame, Paul reflected on the surrealness of the moment.

Paul is currently answering questions at his pre-match press conference. In response to @michaelmariam_‘s question about his fast-paced career, Paul replied, “I’ve been going nonstop. I haven’t had the chance to look back and be like ‘Wow, that’s crazy.'” pic.twitter.com/Yppahlfa15

“I haven’t [had the chance to soak it all in],” Paul said in response to the Wheel’s question about fighting in an NFL stadium. “My team helps me reflect, but I’ve just been going non-stop and haven’t really looked back and thought ‘this is crazy,’ but it is pretty absurd.”

In order to enter the stadium, media personnel like myself had to present either proof of vaccination or a negative COVID-19 test in the days leading up to fight night. When I entered, I was given a media credential with my venue access and was escorted to my seat, a private suite in the lower level to ensure social distancing. While there was social distancing in the media area, you would never know we were in a pandemic looking at the other guests. The celebrities, fans and most in attendance didn’t wear masks or social distance. Every attendee was required to have a negative COVID test to enter the stadium, though.

At my seat were two monitors displaying the live stream and an executive chair. My seat was in the perfect spot: I had a clear view of the ring, a perfect angle of the entertainment stage and the stadium suite and club area, where the celebrities sat and partied leading up to the main card, was right above me.

The musical acts were headlined by Justin Bieber, The Black Keys and Doja Cat. Bieber performed four of his songs on the main stage, including “Anyone” and “Peaches” from his new album “Justice.” With fireworks and a light show surrounding Bieber as he began on the piano, the energy throughout the stadium was electric. Diplo, Major Lazer, Saweetie and Snoop Dogg’s new group, Mt. Westmore, also performed between fights throughout the night. 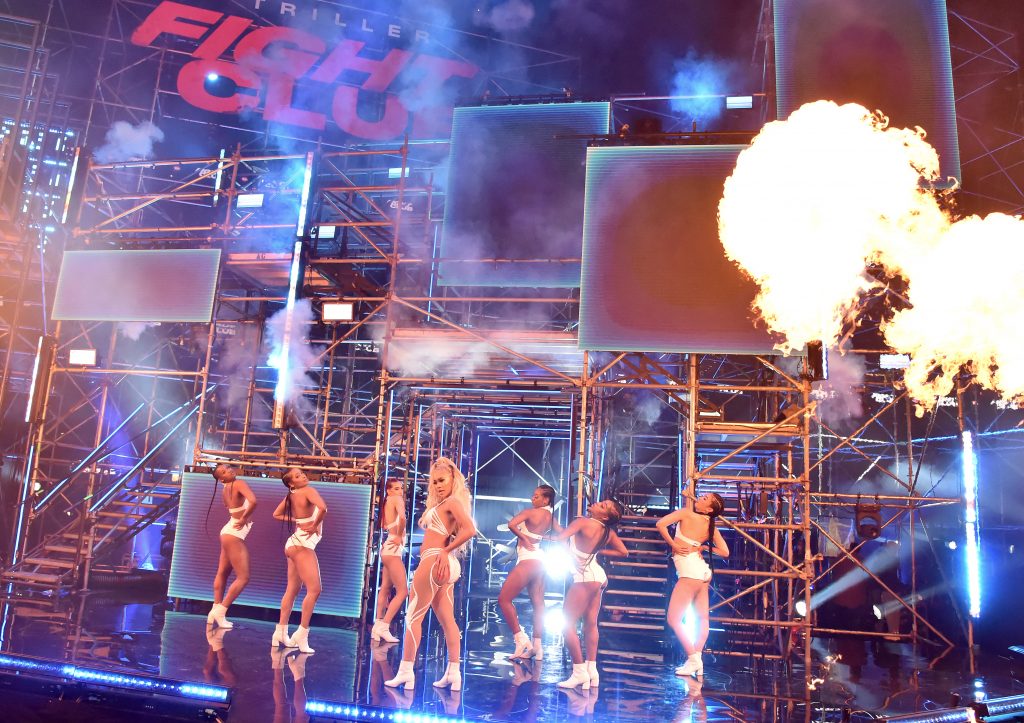 The performances and spectacle led up to the main event of the night between Paul and Askren. Askren walked into the ring first led by “Dude with Sign” doing just as his name says. Paul, known for his over-the-top antics, was led into the ring by his mascot The Problem Bot, an overly-sized robot nicknamed after Paul, who goes by “The PRBLM Child.” The boxers settled into their corners of the ring and their teams gave them last minute advice.

Michael Buffer, the legendary ring announcer, entered the ring and exclaimed his infamous trademarked catchphrase, “Let’s get ready to rumble” to begin the fight.

After the opening bell rang, the boxers exchanged jabs, but Paul took control rather quickly. In less than two minutes, Paul knocked Askren to the ground. While Askren got back up, the referee determined that he was not in good enough shape to protect himself and continue fighting, pushing Paul to 3-0 by TKO in his young career. The quick-nature of the fight was shocking, yet Paul’s swift ability to assert his dominance over the first professional fighter he’s ever faced was rather impressive. 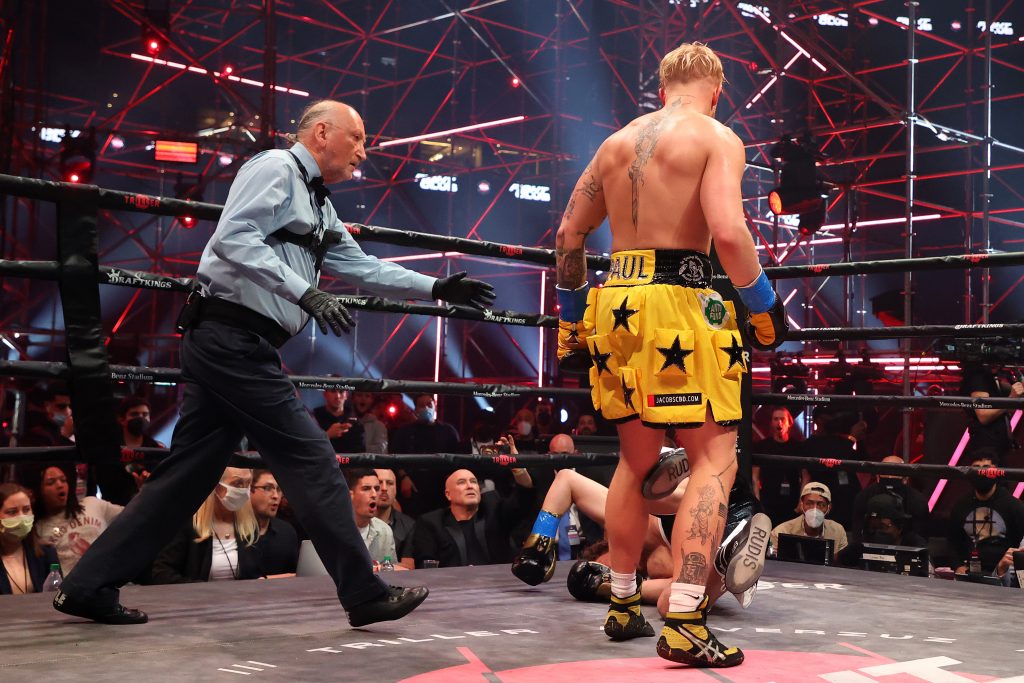 With only media, celebrities and a few lucky fans that won the Golden Ticket contest through Triller, the environment was quite interesting. At a boxing match, fans are typically screaming and fully immersed in the action. Concerts also typically have fans singing along, dancing and surrounding the performer. With very few fans in the building, watching the artists perform in front of a small crowd was a unique experience all around.

The way the stages were constructed were intentionally made for at-home viewing rather than in-person spectators, but it was nonetheless a dramatic event that failed to disappoint. To see more highlights from this event, check out more of the Wheel’s coverage of Triller Fight Club on our Twitter and Instagram.