Inequality in the United States

A thriving middle class is central to how most Americans think about our country, but stagnant middle class wages and soaring economic inequality belie this self-perception. Politicians are bitterly divided over whether and how to address these problems. Lost in this debate is a vitally important piece of our history: the middle class was largely created, supported and, ultimately, allowed to dissipate by the federal government.

In fact, extreme income inequality is probably the “natural” state of things — what the economy would always look like without the heavy thumb of the government resting on the scale. Before World War II, the nation’s wealth was concentrated in the hands of men who owned industrial or finance companies — men typified by John D. Rockefeller, Andrew Carnegie and J.P. Morgan. There was no middle class; most Americans toiled in factories or on farms for a pittance. This changed quite suddenly in the late 1930’s.

President Franklin D. Roosevelt was elected with a mandate to end the Great Depression. The eruption of World War II gave his administration even greater authority to intervene in the economy, including directly setting wages in much of the private sector. Roosevelt utilized this power to flatten income distribution, giving large raises to the most poorly paid workers. To fund the war, taxes on the wealthy were raised to astronomical levels, peaking at 94 percent. The Roosevelt administration also supported labor unions, which further boosted wages for low-income workers. The result was a sudden, massive collapse of income inequality and the birth of the middle class. Economists refer to this extraordinary period as “The Great Compression.” 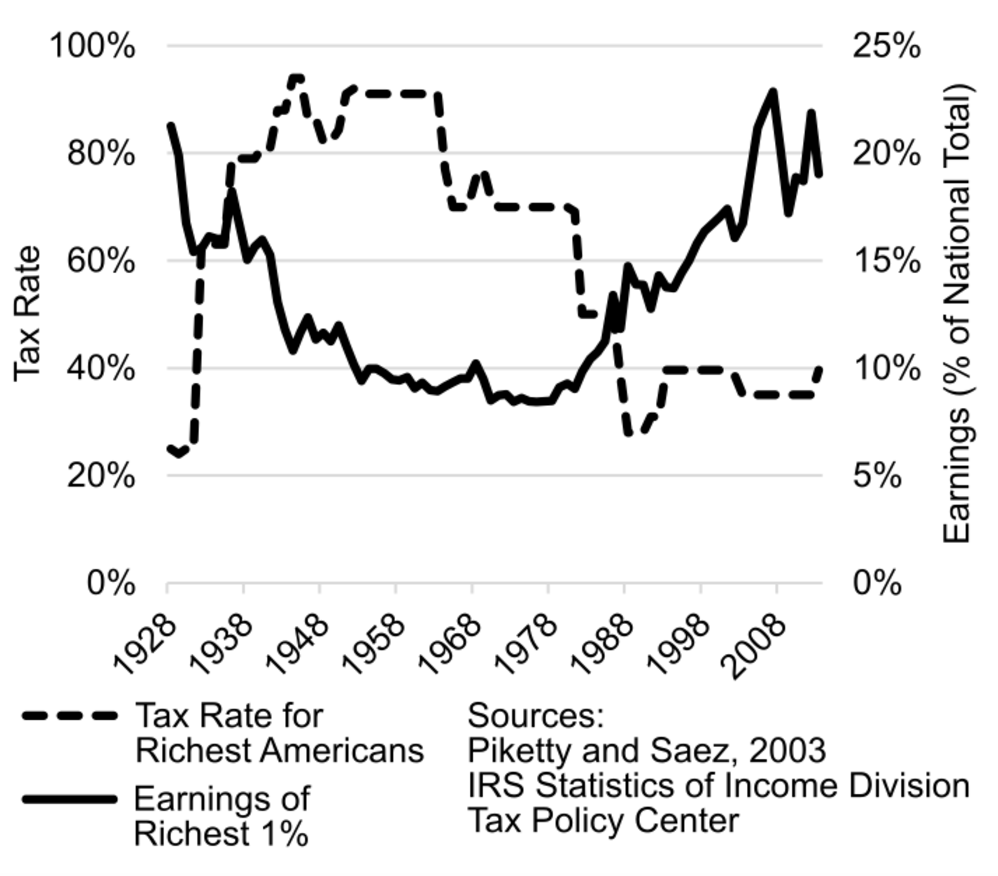 For a generation, middle class incomes grew rapidly, and the gap between the super-rich and the rest was small. Incomes of the wealthiest Americans were taxed at 70 percent or greater. Labor unions were strong. Then things changed. America once again elected a president, Ronald Reagan, with a mandate to end an economic crisis. Like FDR before him, Reagan used the stagflation of the late 1970s as an opportunity to reshape the economy. He cut taxes on the wealthy, initiated an era of union busting and ended a generation of robust government support for the middle class. Median wages for white males, which doubled in the previous 30 years, are still stalled at pre-Reagan levels. Thankfully, racial minorities and women have continued to catch up to white males, but they still haven’t closed the gap. Prosperity in the middle class ended and income inequality returned to pre-Roosevelt levels.

Why, after decades of stagnant middle class wages and a dramatic explosion of income inequality, is there no serious discussion of returning to pre-1980 policy on taxes and labor unions? Under-informed and misinformed voters are a large part of the problem. Republican voters are divided on raising taxes on the wealthy, but support raising taxes to 50 percent when reminded that taxes were this high under President Reagan. This speaks to a larger truth: most of us aren’t aware of our own history. Most voters don’t realize how tightly linked wage growth and income inequality have been over the last 80 years. This problem cannot be solved without sustained, active voter education by journalists. Every time a politician appears on television to talk about their tax proposals, journalists should be forcefully articulating this context to viewers.

Another substantial problem is that both Democratic and Republican politicians depend on wealthy individuals to fund their campaigns. The wealthy would not look kindly on politicians who favor doubling their taxes. Replacing our corrupt campaign-financing system with public-only funding is best way to address this problem.

President Reagan famously said that government isn’t the solution to our problems; government is the problem. Our history tells us otherwise. A thriving middle class depends on the government counteracting inequality. When politicians debate taxes, labor unions or the middle class, we need journalists to provide us with historical context. We need voters to punish politicians whose policies exacerbate rather than mitigate concentration of wealth. Only then will we confront economic inequality in the United States.