First, Candler is a university-based seminary.

That it would identify itself with the most conservative rhetoric of southern Methodism undermines its credibility as a scholarly community. By taking this action, it publicly claims the identity of a parochial southern seminary rather than a serious academic institution.

Second, Fox’s position on the inclusion of gays and lesbians in the body of Christ is an assault on basic issues of human dignity and worth.

That Candler identifies itself with such an assault is appalling to me.

I feel great tenderness for current students who must feel betrayed by this action.

Third, Love’s appeal to diversity of opinion regarding the inclusion of Lesbian, Gay, Bisexual and Transgender (LGBT) people within Christian community is troubling. There have been times when racism, opposition to the ordination of women and misogynistic attitudes and structures were considered normative.

If Fox’s position were overtly racist, would he be honored?

It seems that the humanity of gay, lesbian and bisexual Christians is still a matter for debate at Candler.

Lastly, I am reminded of Martin Luther King Jr’s “Letter from a Birmingham Jail.” He was highly critical of the clergy who thought he was being hasty, that he should wait for justice. He condemned their tepid response.

But Candler’s honoring of Fox is worse than a tepid response. It is direct support. It is aligning Candler’s identity, theology and ethical ideals with the degradation of a part of humanity.

But as King pointed out, the oppression of any people is a travesty for all humanity. I cannot believe that I need to make this point in response to Candler’s actions.

As a student at Candler, I was a co-founder of Sacred Worth, an LGBT organization for Candler Students.

No such organization existed prior to the spring of 1992, and it was not officially recognized by Candler until the University forced them to in spring 1995.

At a meeting in his office, Kevin LaGree, the Dean of the Candler School of Theology at the time, said he would permit us to exist but that if he experienced any difficulty from the denomination, then he would not acknowledge that the conversation had occurred and that he would simply hang us out to dry.

It was only when the University stepped in, reminding Candler that it was part of a broader academic institution and not simply a conservative, backwater seminary that Sacred Worth became a legitimate student organization.

I am deeply grieved that we have come so few steps further in 20 years.

When financial pressure is placed on Candler, we – the LGBT community and those who love and support us – are simply thrown under the bus.

We are all human beings. We are all part of the body of Christ.

That Candler supports and identifies with our degradation and humiliation through this award is a shocking diminishment of its reputation as a serious scholarly community and a place of theological sophistication and compassion.

This wound will not easily heal.

Maggie Kulyk (’96T) is a Candler School of Theology alumna from Erie, Penn.

A Response to Giffin on ‘White Privilege’ 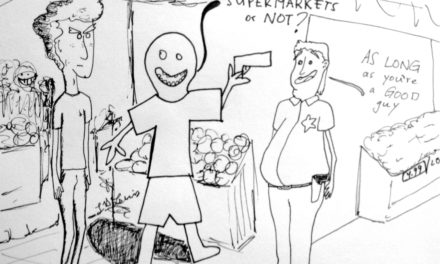 Our Opinion: SPC ‘Swoops’ In For the Kill