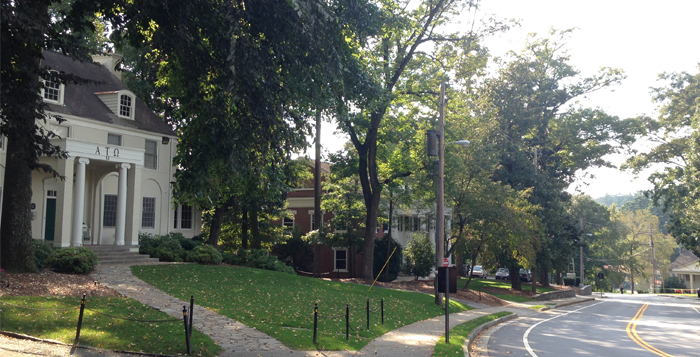 By Stephen Fowler and Sonam Vashi

According to a statement released by IFC, the suspension is a time to pause and reflect on what it calls serious issues in the community:

“Now is the time to act. The InterFraternity Council acknowledges that we have serious issues needing to be addressed; over the past year we have taken steps forward to better our community. But, we also realize that there is much more work to do. And so, for now, we are closing our doors … This pause will give our community time to reevaluate how we address the intolerable issues of sexual violence, substance abuse, and discrimination on our campus. These recent events are incongruent with our fraternal and communal values. During this time, we will reflect on the standards and expectations we set for our members as well as our guests. We will lift the ban once we have produced tangible and proactive steps mending the flaws in our social culture at Emory…”

IFC President and Goizueta Business School senior Brian Diener wrote in an email to the Wheel that while the IFC plays a major role in the social scene at Emory, it also hopes to play a major role in addressing issues surrounding a safe and inclusive environment at Emory moving forward.

“We are going to work with a variety of interested groups and offices to address these issues and develop our plan,” Diener wrote. “We already have relationships with many of the resources on campus and will certainly work with any student, alumni, professor or administrator who would like to assist us [in addressing these issues].”

Diener wrote that IFC is meeting with chapter presidents on Monday to outline exact details of the suspension and that it includes all registered parties, date parties, mixers and unofficial events at fraternity houses.

“This ban was imposed by IFC and not the Emory administration so that we could take time and address issues in our community,” Diener wrote. “The actions of a few members do have implications for our whole community so we felt that we must come together and address them as a united group.”

College sophomore and Delta Phi Epsilon sorority member Gretchen Van Keuren said that she and many of her female friends are happy that the suspension is self-imposed and that IFC is taking action.

“Personally, it’s nice to see IFC take action, especially after there were multiple sexual assault instances in the houses last year, and they did nothing,” Van Keuren said. “Given the high number of EMS calls just this past Friday night, the actions done during the intramural football game and the email about the rape, they needed to act strongly.”

Several sexual assaults have been reported to take place on Emory’s campus in recent years. On Aug. 30, a female student reported being sexually assaulted between Longstreet-Means and McTyeire residence halls, according to an all-Emory email from Interim Vice President for Communications and Marketing Nancy Seideman. The perpetrator in this assault was described as a 20-year-old white male in the email. In February 2014, a female Emory student reported she was sexually assaulted at the former Sigma Nu house.

In May 2014, the U.S. Department of Education’s Office of Civil Rights (OCR) listed Emory as one of 55 colleges under open federal review regarding its handling of sexual violence claims on campus, a list that has since grown to include 85 colleges.

Nair wrote in his email that the Emory community should come together and support ending sexual violence, acts of bias and other social injustices that he says are antithetical to our notion of community.

“As recent University notifications indicate, our basic Emory community principle of respect for others is violated on too many occasions.” Nair wrote. “The responses by the overwhelming majority of students, staff, faculty, parents and alumni throughout the Emory community, who condemn sexual violence and bias at every turn, make it clear that we desire a community of respect.”

Nair’s email also added that the University will “respond decisively to these acts and those responsible, while nurturing awareness and respect for the diversity that is a foundational strength of this great institution.”

In an email to the Wheel, Nair wrote that the Division of Campus Life is focused on partnering with IFC to shift the culture surrounding its member organizations and that Campus Life and IFC are working collaboratively to help improve the community.

“IFC’s decision demonstrates their resolve to address this issue and the degree to which they consider sexual violence to be a serious issue,” Rizzo wrote. “I look forward to working with IFC and my colleagues in OSFL, EPD [Emory Police Department] and other offices in creating a more comprehensive plan over the next few weeks to address safety concerns.”

“The Emory that I want to attend is not a place where sexual violence occurs,” Darby’s email stated. “This should not be an aspirational vision – it should be reality.”

Several Emory students were pleased to see IFC and the Emory administration taking action toward sexual assault on campus.

“I think it is a very clear message from the administration that sexual assault at Emory is going to be handled differently from now on,” College senior and VP of Peer Facilitators for Sexual Assault Peer Advocates (SAPA) Anusha Ravi said. “I think that while students may think this seems too harsh, since this incident only happened earlier today at one fraternity, incidents have been happening over my three years here at many fraternities … I personally think that the administration is trying to create a new ‘normal’ for bias incidents and acts of intolerance at Emory.”

College sophomore and Kappa Alpha fraternity member Jacob Durst wrote in a Facebook message to the Wheel that he believes the University is mishandling the situation.

“If Dean Nair truly cared about changing the culture of Greek Life at this school, he would have actually conducted a detailed investigation of the incident at SAE before he found out the truth of what happened at 18 Eagle Row, and then acted appropriately,” Durst wrote. “However, in an effort to show that the University cares about sexual assault, rather than sit by and do nothing as they did last spring for the incident involving Beta Theta Pi, they have effectively and unjustly punished all of Greek life for the alleged misconduct of the few.”

College junior and Gamma Phi Beta sorority member Jordan Newnam wrote in an email to the Wheel that she believes suspending the social scene at Emory will cut off Emory students from resources they may need.

“I fear that banning social events in IFC fraternity houses will likely result in students seeking other venues in Atlanta to continue the same activities, and those venues don’t hold the positive social services that Emory provides, such as Saferide, EMS, CAPS, etc.,” Newnam wrote. “In the event that the same type of sexual violence occurs off campus, what resources will an Emory student have then?”

College senior and Zeta Beta Tau fraternity member David Bailey said that IFC’s actions are productive and reflective of what he says is the University’s attempt to regulate Greek organizations.

“I think that the University is trying to create a Greek system that runs parallel to its values and to lead the charge to redefine how the Greek system is viewed nationally,” Bailey said. “I think IFC has seen that the University has wanted to instill these values of inclusivity and diversity and condemns acts of intolerance and violence, and so IFC is saying, ‘these are the steps we’re taking.'”

“Greek life promotes academics and athletics and teaches personal responsibility and responsibility to others, but it’s also connected to incidents of sexual assaults,” Lowe said. “If we care about Greek life, then we should care about the people in it.”