Identity fission: reconciling the Chinese and the American in me 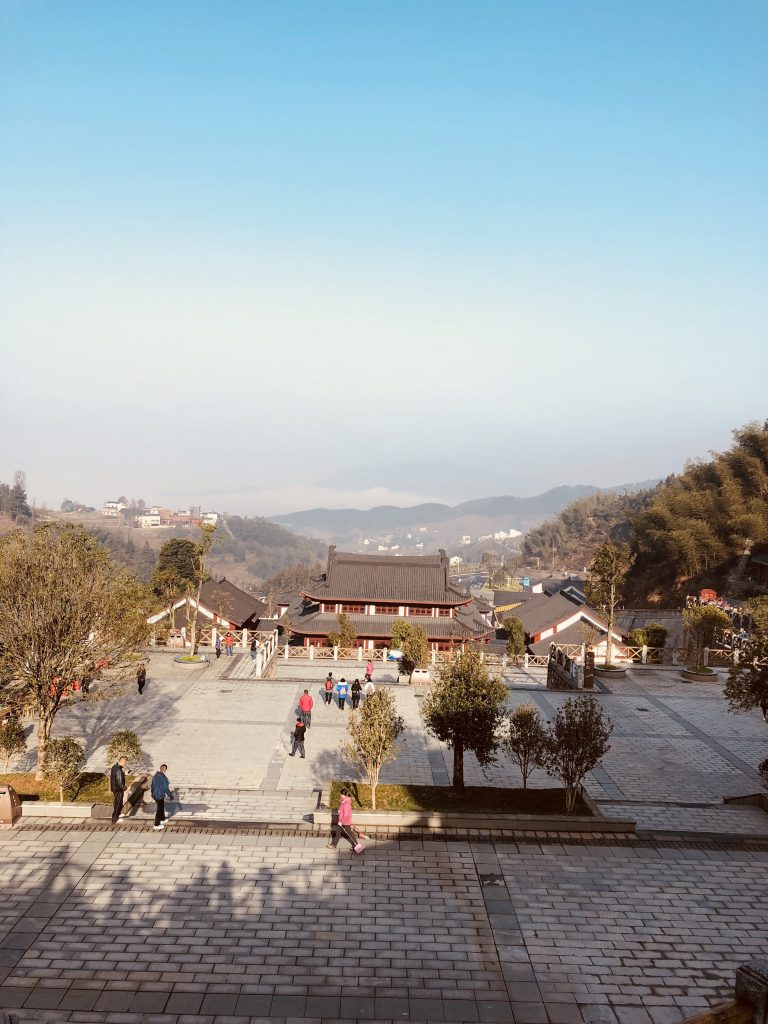 Happy Camp has been one of the longest running reality shows in China after airing its first episode in 1997. I’ve been watching it every week without fail for 11 years. It’s kept me not only up to date with the latest celebrity drama, but also introduced me to Chinese slang, music and culture. Happy Camp was my weekly, Sunday night reminder that I’m not any less Chinese than the international students, and despite speaking English without an accent, Chinese is still technically my first language.

I feel hollowed out knowing that I will no longer be watching Happy Camp on Sunday nights while I’m folding my laundry. I try to mitigate those feelings by listening to Chinese music, but I’m ashamed of my music taste – the young C-pop boy bands, the classic singers who existed far before my time and the traditional Chinese music rooted with swing notes from the Qing dynasty. I’m ashamed of what people might say, so no one knows that I used to watch reality shows about celebrities experiencing the army or taking care of zoo animals.

Recently, a Chinese celebrity crackdown came shortly after Kris Wu, Chinese-Canadian K-pop star was arrested for sexual assault, and Zhao Wei, one of China’s most famous actresses for the last 30 years, disappeared – along with all her past works and social media accounts.

The Chinese Communist Party (CCP) has recently been at odds with the entertainment industry, accusing them of influencing young children to stop going to school and pursuing lavish, artistic lifestyles. To say the CCP has a complicated relationship with celebrities is a massive understatement. On one hand, the CCP uses celebrities to promote propaganda and spread positive messages by asking celebrities to sing patriotic songs every year during the Chinese Central Television (CCTV)’s annual Spring Festival Gala and inviting young, attractive male stars to attract the younger audiences. Yet still, the CCP fears that celebrities will become driving forces of mass mobilization due to their large fan bases, and start to challenge the Party’s agenda. Essentially, celebrities act akin to the so-called “free press” in the U.S.

The CCP’s rationale for censoring the media is induced by fear. Famous Chinese actresses have amassed dedicated fans, sometimes criticizing the government and facing intense backlash. To the CCP, these social values of “anarchism, hegemony, money-worship, pragmatism and hedonism” represent Western individualism, posing a threat to erode the political unity and collectivist foundations of the regime. To some extent, I feel equally worried about the corrosion of the shows of my childhood — I can’t petition the government to reboot the classics.

The fear of change and Western encroachment drives many political and social decisions in the Chinese regime: a reminder of the Western desire to democratize the world and sit atop a global throne. The entertainment industry in China is risky. As the CCP’s microphone, its recent crackdown sent a very clear message: one wrong move and you might disappear. Along with these restrictions is my ever-intensifying fear that one day I’ll truly believe that I’m just American.

I go to school to learn precisely about these issues. As a political science and sociology double major, I’m always wondering if democracy is the best form of government, and if somewhere along my Western education, educators made a mistake in their portrayal of modern China.

“Watch this alternative,” my parents say to me. “Watch Chinese debates if you’re trying to learn Chinese.” They think Happy Camp is mindless and unintellectual, upholding stereotypes that celebrities are uneducated and threw their life away for hedonistic art in front of the screen. But for me, the show feels like the only standing bridge connecting both parts of my identity together.

When I first came to Emory, I gravitated toward the international students, desperate to speak Chinese and start to shed my growing American accent. I found myself turned away, unable to relate to the popular culture references and the unfamiliar, new slang. My outdated understanding of Chinese culture isolated me in a vacuum, where I increasingly felt less and less Asian. What’s more, I couldn’t relate to my peers who grew up in the U.S. – I didn’t grow up with the same childhood movies or TV shows like Gossip Girl or Pitch Perfect, and most of them I tried desperately to catch up on after returning from China.

I’m scared of becoming so far removed from my culture that people talk behind my back and call me “white-washed,” that my own family refers to me as “American” and that I have no knowledge of who I am besides those six years where I was Chinese.

The disappearance of well-known celebrities and my favorite TV show only reiterated how lonely I was, knowing that I would only become further distanced from understanding what my parents sent in our family chat. I don’t identify with the Chinese American students who only grew up in the U.S., nor do I relate to the international students who lived in China for twice as long as me. Maybe I’m only six years Chinese and 13 years American; I milked the whole “being Chinese” thing for long enough, and maybe now it’s time to admit that I’m just American.

I’ve committed to spending a majority of my year only listening to Chinese music. Maybe this is my attempt to reconcile the two halves of my identity, so that when I greet my aunts and uncles after more than five years, I’ll be able to speak fluent Chinese instead of stumbling over words and hopelessly looking to my parents for the Chinese translation. When I tell my dad that I can’t take Chinese classes at Emory because I’m considered a native speaker, he smirks and asks, “Are the standards for native speakers so low?”

I grew up in the U.S. and went to an international school in China. Understanding Chinese censorship is often boiled down to dictatorship and nonexistent free speech. But these portrayals are far from the truth. Western propaganda does not do justice to Chinese culture or its history. The truth of China, the happiness of its people and the state of its governance should not be whittled down to a single observation by an ever-floundering U.S. government. International public opinions on China are growing considerably unfavorable, and sometimes I struggle to listen to people in the U.S. berate China without any understanding of the extent of government censorship. I grapple with the subtle word choice of news articles, emblematic of Western hypocrisy that touts support for Western ideals of free speech and democratization, while Western presidential approval ratings barely reach numbers above 60%.

So when I think of identity, I’m reminded of what my grandfather told me at 12 years old. “In China, you have to act Chinese; but when you’re in America, you have to act American.” Though I know these repeated reminders come from a desire to protect me from being shunned, I feel the complete opposite. I hail my respect for Chinese censorship and hide my support for queer rights when I’m in China, then take heed to my knowledge of American liberalism so I don’t end up ostracized. When I reflect on my political standings, I would perhaps identify as politically liberal and socially conservative – a byproduct of my upbringing and rigid familial values. I write for the Wheel, where as a newspaper, we supposedly foster open dialogue. I sit on the Editorial Board as both a member and an editor, yet I rarely talk because I feel disrespected and ignored. I don’t stand up for my beliefs because I know some of my opinions will be judged because I’m not white and I’m not a man; I don’t know where to express or begin to explain my thought process because every time I start, it feels too painfully conservative.

I’m supposedly “more Chinese” than other American-born Chinese students because I spent six years in China, but instead, I feel like a fraud and a walking contradiction. My excitement of Chinese holidays is amplified in college, but still tinted with melancholy and regret. Right now, I would be wearing red and gathering around a round table that took up an entire room to eat dinner. Dinner in China is always a family affair. We use our same chopsticks to pick up food for the person sitting next to us, with little regard for bacteria and sharing saliva. After dinner, we sit around the table for a couple more hours while the grandparents and children exchange red envelopes of money for a slurry of well-rehearsed good luck phrases telling our elders to live long and prosperous. But I can’t revert to my childhood self and collect red envelopes on WeChat because the Chinese government doesn’t accept me or my VISA card. I’m sitting in a coffee shop wondering if identity was measured in percentages, how much of me was still Chinese?

I went to H-mart for the first time three weeks ago. Walking into the store was the first time I started to appreciate what my parents were saying about finding far more Asian food in Atlanta than Indiana. As I wandered around, looking for fruit to bring back to my dorm, I grabbed a couple of oranges and squeezed them in my palms. My friends looked at me, chuckled and walked away. Aunties at Chinese grocery stores in Indiana (including my parents), and at farmer’s markets in China always tell me that feeling the fruit is the best way to tell if it’s ripe and sweet. It’s a habit I’ve now adopted, along with fond memories of accompanying my relatives to the market and watching them touch all the produce.

I don’t regret my time in China. It’s done some cliché molding to my identity, and I could go into some sappy commentary on how it changed my life and shaped me into who I am, but that seems pointless in the grand scheme of things. Spending six years in China reconnected me with a culture that my parents desperately feared I would lose; it gave me a newfound appreciation for a society and a culture uninhibited by Western propaganda. But at the same time, leaving for China instilled in me a perpetual fear of not knowing who I am. Growing up with different types of pop culture that my friends can’t relate to paint me as “weird,” as an “outsider” and as something I’d rather sit and watch on my own time in the confines of my room.

When I listen to Chinese music, I turn on the private session mode on Spotify so no one asks about it; when I scroll through my pictures, I breeze quickly through the Chinese fangirl moments I have or any memory of being in China; when I watch Chinese TV shows, I’ve perfected the screen-slide to avoid getting caught, all so I can practice what my grandpa said — be American in America, and Chinese in China.

If there’s one part of me I’ve worked on perfecting, it’s the fission of myself into two separate entities. Perhaps to dissolve my discomfort trying to fit two identities in one body, I should lean into both and be 100% Chinese and 100% American.