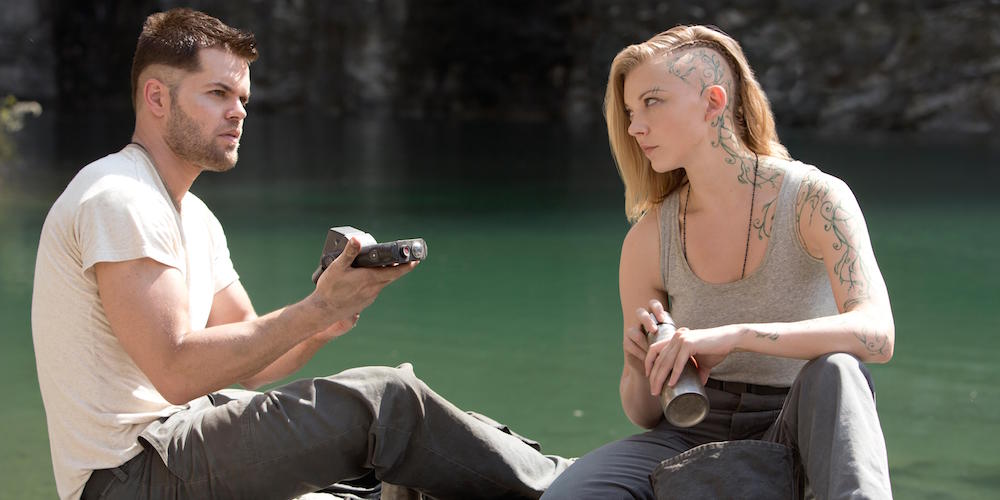 If you were to tell a young Wes Chatham that he would be cast in The Hunger Games: Mockingjay Part 2 he probably wouldn’t believe you. Growing up in North Georgia, Chatham was kicked out of his first high school, then became a student at the Give Center, a school for troubled teenagers. It was only when a professional theater company out of Atlanta started a mentoring program with the Give Center and Chatham was chosen to write a play that his passion for the arts ignited.

After graduating high school, Chatham joined the military. However, the arts even followed him in his deployment. Denzel Washington chose his navy ship to shoot the movie Antwone Fisher just three months before his military tour was finished, resulting in Chatham’s first break into acting.

In Mockingjay Part 2, released Nov. 20 Chatham plays Castor, a member of the television crew that films Katniss Everdeen (Jennifer Lawrence) to create rebel propaganda against the totalitarian government that sits in the Capitol.

The Wheel was given the opportunity to interview Chatham at a roundtable press conference on Nov. 12 at the Atlanta History Center.

Shalvi Shah: Have you read The Hunger Games trilogy?

Wes Chatham: Yes. I didn’t read [the books] until I found out about the job and [that] my wife’s a huge fan of The Hunger Games. I remember sitting in bed and she was reading and I was like, “What are you reading?” And she was like, “Oh, it’s a book where children kill each other for food.” And I was like, “What? What is this?”

SS: So your character Castor in The Hunger Games dies quite a gruesome death in the film. How was it filming that?

WC: It was intense because there were eight stunt guys wearing green who were running and attacking me, all over me, clawing my face, while I was in a foot of water. We did like three or four takes, and we were so focused on getting it right and the aggression and the violence right, that at one point I was underwater and wondered, “Am I going to drown?” So when you see me gasping for breath in the film, it’s the real deal.

SS: Was that the most interesting scene you filmed or do you have another favorite?

WC: I think the scene when my character’s brother enters the tunnels for the first time in a long time was the most interesting. Because we don’t say a lot during the film and we have to communicate the history of being brothers and the love that we have for each other in that scene with just our looks, so that was a challenge to try to achieve that.

SS: Who was the most fun person to work with? Do you have any good stories from [the] set?

WC: Everybody was really funny and really fun. It was a very social, fun set. But in terms of characters that make you laugh I think Jen [Jennifer Lawrence] and Woody Harrelson. Now Harrelson’s a very funny dude. I have a funny story too, and I guess you could YouTube where Jen, Josh [Hutcherson] and Liam [Hemsworth] were talking about how clumsy I was on set. I guess I am clumsy and didn’t know it. But anyway, on sets like this, there’s some stuff that’s real, and some stuff that isn’t. We were in Berlin, shooting over these World War II barracks, and we run up the stairs and we run back down again and again. I got bored, [and] there was a huge, high wall and I wanted to jump on that wall and walk down. But when I jumped on the wall, I realized it was Styrofoam and I went psfffshhh and fell right through it! It left me hanging on the side so that they had to come and pull me out of it. That was pretty embarrassing!

SS: Do you have advice for college students who might want to go into acting?

WC: What I would say is most important is, learn your craft. Get good at what you’re doing. Because all of the stuff that you see these days — it doesn’t matter how many Twitter or Instagram followers you have. All of that is [a result] of the work. And I see many amateurs who want something without having to work for it. The reality is that your currency in moviemaking, your currency in storytelling, is how good you are at your craft. And it takes discipline, it takes hard work. If you put in your time and really get good at what you do, then you have value, and you develop. When people say that [it’s a tough industry], that it’s all about luck, that’s not exactly true. The truth is that this industry is a sellers market. So if you have a dream for something that’s in your heart, pursue it and don’t expect anything in return at first.

Sometimes that might be the worst thing that ever happens to you but do the work. And let the work be a reward unto itself. One day, maybe all the other stuff will come along. But that’s what it needs to be like.

SS: We know you come from a military background, and in The Hunger Games you move around with guns and arms. Did the character [you play] come to you naturally?

WC: Yes, I definitely think the military career helps tremendously in a lot of different ways especially in handling weapons and walking, but I also think it gives you the discipline to thrive in a structured environment like moviemaking, so that was very helpful.

SS: Who’s your biggest inspiration as an actor?

WC: I have a few. For different reasons. I really admire Clint Eastwood because I was a fan of him while growing up. I was a fan of his Westerns, but I was also a fan of him as a person and the worlds he created. As an actor, you don’t have a lot of control, but Clint Eastwood had a savvy mind and he started his own production company where he became a director. So he could say, “I want to do this job, and this is how I’m going to do it.” So I really admire that. Robert Redford also became an amazing director. Him and Paul Newman; there are many others I admire. Purely from an actor’s standpoint, though, Daniel Day-Lewis and Meryl Streep [are] as good as it gets. Meryl Streep can do any role.

SS: What was it like to work with CGI?

WC: The difference with this movie was that the set was mostly real, and very creatively and carefully constructed. It was a real treat, because you had so much to pull from the environment to put into your character.