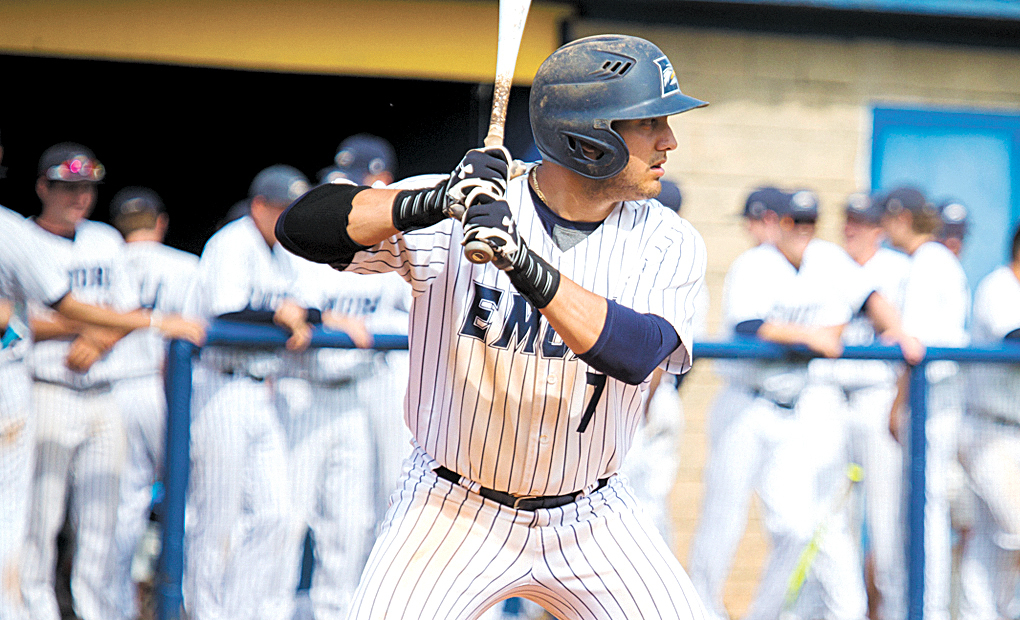 From getting cut his freshman season to preparing for a career in aerospace engineering, senior outfielder Brian Hernandez has accomplished a lot both on and off the field. Photo Courtesy of Emory Athletics.

After he overslept the last day of baseball tryouts run by a coach known for his demand for punctuality, then-freshman Brian Hernandez knew he had his work cut out for him. The now-senior outfielder and designated hitter, who was cut from the team his freshman year but managed to win a spot his sophomore year, is now approaching the end of a highly successful stint on the Emory baseball team. Hernandez’s turbulent start to his Emory baseball career made his rise to success as a key member of the team even more impressive. Hernandez compiled a career batting average of .348, registering six home runs, 17 doubles and 84 RBIs in 106 games. During his junior year, D3baseball.com selected Hernandez to the All-South Region third team, and the UAA named him to their first team.

The Emory Wheel spoke with Hernandez about his Cuban heritage, hometown community in South Florida and his plans after graduation.

Stephen Mattes, The Emory Wheel: What makes baseball so special to you?

Brian Hernandez: As a kid I really fell in love with the game because there are so many intricacies to it. It is one of the truest athletic games there is as far as combining athleticism and physical attributes with skill and mental components. I love that there are no time constraints. I grew up with the game of baseball. My parents were born in Cuba, a big baseball country. Then they moved to Miami, where there is also a big baseball community.

EW: What do you consider the defining moment of your Emory baseball career?

BH: I was actually cut my freshman year. I felt like I was doing well during the fall tryout period. I then got an ear infection and did not wake up to my alarm for the last day of tryouts, which ended up being a parents’ weekend. I ended up showing up to the field 45 minutes late after being a couple of minutes late the prior week. Head Coach [Mike Twardoski] emphasizes punctuality a lot. Usually his rule is that if you are not there 15 minutes early you’re late. So showing up to practice 45 minutes late was really an hour late. That ended up being the dealbreaker, and I did not make the team my freshman year. This really drove me over that summer to get a lot better and stronger. I then ended up playing a bit the next year, more than a normal incoming [player] would, and then I earned the starting role in my junior year. As much as it hurt to be cut and not [play] baseball for a whole year, without that I wouldn’t be where I am today.

EW: Do you think the team has lived up to expectations this year?

BH: Yes and no. This was supposed to be a big year for us because we have 10 seniors. Every single one of these seniors has a big role on the team, and we all play regularly. There were high expectations, especially coming into a year after we reached the World Series three years in a row. In the beginning half of the season, we definitely lived up to and exceeded our expectations, and then we went on a little bit of a skid, [during] which everyone was kind of confused. Nobody really knew what was going on and we had alumni and parents texting us. We were meeting with the coaches, trying to figure things out. Luckily now we have picked it back up a little bit. Hopefully, we will end up living up to and exceeding our expectations.

EW: Which baseball player do you most look up to?

BH: My favorite is the late Jose Fernandez. He was a pillar of the South Florida community and the Cuban community. Not only with being the great young pitcher that he was — the way he played the game of baseball was electrifying. He clearly had a lot of passion for the game. He also had a lot of fun playing the game, which is something I try to do as much as I can because at the end of the day it is a game. You get frustrated about not being able to help your team if you get out or you make an error … [but] you should have fun playing because if not there is no reason to be playing it. It was a very emotional time for the South Florida community when he ended up passing away. The best way to honor his memory is to continue to play the way he did.

EW: What are your plans after graduation?

BH: Right now I am kind of testing out the water. I don’t know exactly what I’m going to do right now. Because of baseball I haven’t had a ton of work experience in the field, but I am graduating with a physics major and a math minor, and I am looking to go into aerospace engineering. My goal is to first get an internship at the Kennedy Space Center, which would be my dream, and then go from there. That will help me decide if I want to go to graduate school for aerospace engineering or if I want to do research, astrophysics or just regular engineering.
Hernandez and the Eagles will host the New York University Violets April 21, in their last series of the regular season.