There has been uncertainty regarding how the Georgia Campus Carry Act of 2013, or House Bill (HB) 29, if passed, would impact private colleges and universities like Emory. Filed by State Representative Charles Gregory (R-Kennesaw), HB 29 would repeal current Georgia state prohibitions against carrying firearms onto postsecondary campuses.

A point of confusion surrounding the bill is whether it would actually require colleges and universities like Emory to allow guns. In an interview with the Wheel, Gregory clarified that HB 29 would return private property rights to all postsecondary institutions. According to Gregory, if HB 29 passes, there would be no state prohibition on permit holders to carry guns onto campus, and for all schools, deciding to allow guns would be an issue of school policy and school enforcement.

Gregory added that the bill “simply removes schools from a special list of prohibited places,” which makes college campuses “just like almost all the other property in the state.”

HB 29 was formally introduced this past week in the Georgia House of Representatives and has been assigned to the Public Safety and Homeland Security committee. A freshman legislator, Gregory has filed and sponsored a total of five House Bills in the 2013-2014 legislative session, including HB 28, which would repeal prohibitions against carrying firearms in places of worship. The year’s session, which totals 40 legislative days, began on Jan. 14 and will conclude before May.

According to Gregory, HB 29 has to be approved by the House by the 30th legislative day, which falls in the first week of March, to have a chance at passing this legislative session.

“It’s in committee and hopefully I’ll get a hearing,” Gregory said.

In a statement released on his website, Gregory said he has been working on HB 26-29 “on and off for months,” having campaigned on a “pro-liberty, pro-Second Amendment platform.” Given the mass shootings in the past year, Gregory acknowledged during the interview the controversial nature of the bill.

“Especially with all the media attention surrounding guns this year, it will clearly be an uphill battle,” Gregory said. “But [HB 29] is something with a lot of support, and there are people all across Georgia that understand how important our fundamental, natural, God-given right to self-defense is, and that you don’t check your civil rights at the door when you walk onto the college campus.”

Presently, Gregory is unsure what is going to happen to the bill and is focusing his efforts on moving it forward. Similar legislation was filed last year in the 2011-2012 Regular Session.

House Bill 981, which did not pass, contained stronger and more expansive language authorizing licensed holders to carry concealed weapons in places including school zones and places of worship.

For Gregory, HB 29 is a bill about private property rights. In this case, the decision to allow or forbid guns should fall under the jurisdiction of the school, he said.

In addition, according to Gregory, when the government prohibits a license holder from carrying a weapon onto campus, it interferes with an individual’s right to self-defense, what he terms a “natural right.”

The statement on Gregory’s website mentions the legislator’s passion about the Second Amendment, and how research on “this issue” and world history, civilizations and law have led him to conclude that American citizens are best served by not interfering with the individual’s right to self-defense.

“I firmly believe that, just as our Founding Fathers did, there are some things you have intrinsically that you are given,” Gregory said. “These rights, they supersede government law and the right to self-defense is unalienable … As an adult on a college campus, you still maintain those civil rights.”

Gregory added that in all cases, private property rights apply, and a property owner who does not want guns on campus can set their policy accordingly.

Emory Professor of Law Charles Shanor, whose area of expertise includes constitutional law, said in an interview with the Wheel that in debates on gun policy, constitutional interpretations tend to be overstated in order to support a preferred public policy position.

In the case of campus carry, Shanor said, discussion of whether it should be legalized ought to be faced on its own merits, as the Supreme Court has ruled there can be regulation of handguns in schools and government buildings, among other places.

“Deal directly with the public policy argument,” Shanor said. “Is it a good thing, or is it a bad thing to allow concealed handguns in school? The Second Amendment doesn’t make the decision come out one way or the other.”

The question of whether allowing campus carry is a good or bad idea is another controversial debate.

Opponents of the bill maintain there is no place in a school for firearms, and that an increase in guns makes college campuses more dangerous. Others say an armed presence would help towards preventing future massacres and might even reduce crime in general.

Gregory pointed out that recent mass shootings have taken place in gun-free zones.

“Crazy people … what they’re looking for is a body bag count,” Gregory said. “They will go straight to a school or a church or somewhere they know nobody is going to be able to defend themselves.”

Allowing campus carry would have a deterrent effect, Gregory argued, as criminals would think twice if they knew that an older student might have a gun.

Assistant Professor of Law Alexander Volokh, an expert on law and economics, wrote in an email to the Wheel that the “More Guns, Less Crime” theory was popularized by John Lott.

Lott claimed that allowing law-abiding citizens to carry guns decreases crime by deterring criminals. However, since its emergence, Lott’s theory has faced scrutiny.

“Lott’s a good econometrician,” Volokh wrote, “but like many important results, his thesis is still quite controversial; other good econometricians have argued that Lott’s results is much reduced or disappears when the assumptions behind his model are changed.”

“A gun is an object,” Gregory said. “It’s a paperweight until you pick it up and intentionally use it to harm somebody, or you can save somebody’s life. Other than that it’s just a paperweight.”

This article is part of an ongoing series on gun control on college campuses. Read the first story about House Bill 29 here. 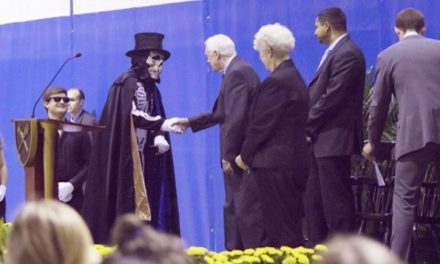