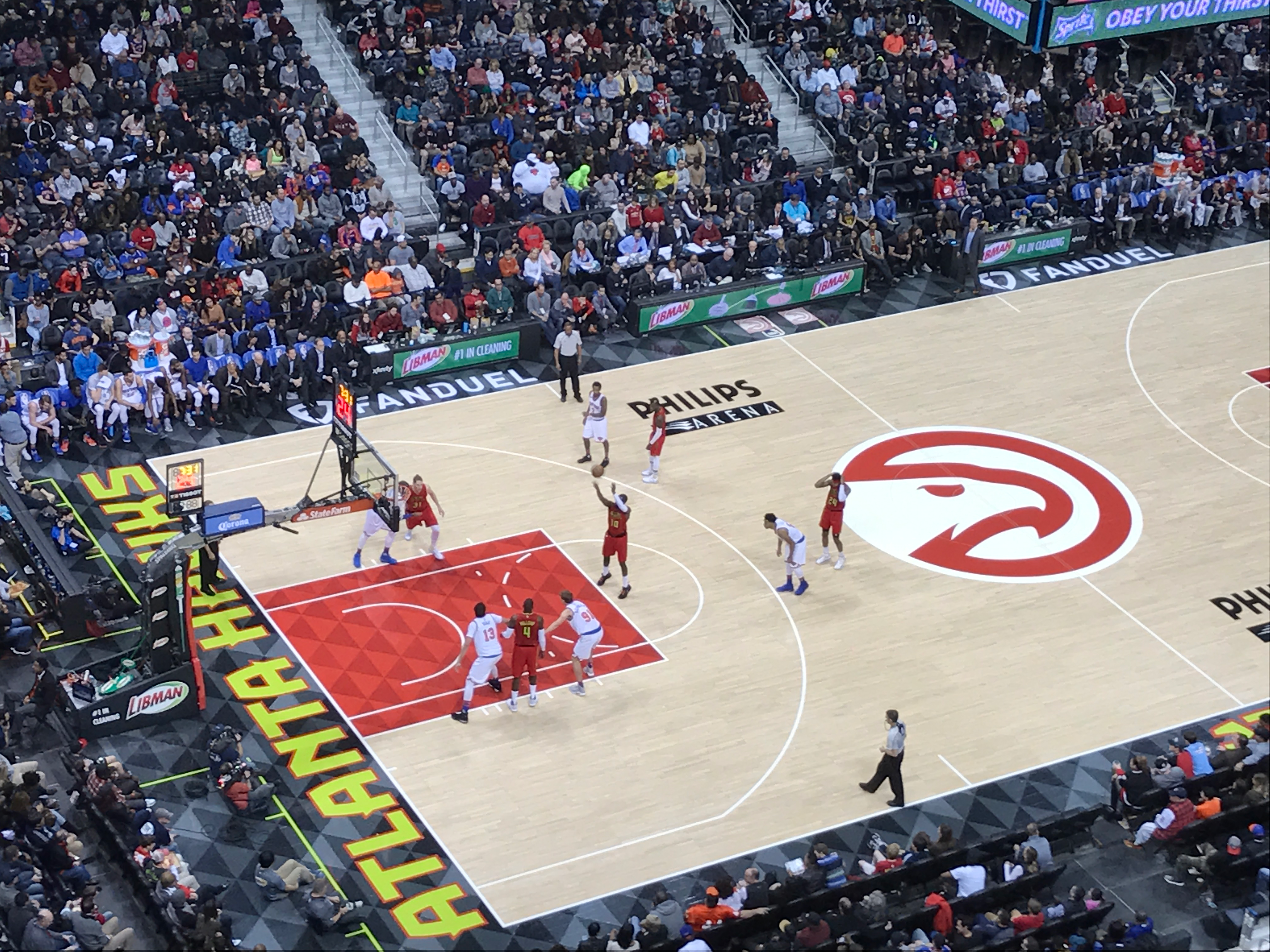 After their previous two matchups were determined by a combined total of five points, the Atlanta Hawks and New York Knicks played a game to remember Sunday. For the eleventh time in NBA history, Sunday’s contest between the Hawks and the visiting Knicks went into quadruple overtime. After New York guard Courtney Lee missed a last second effort at a tying three, the Hawks escaped with a slim 142-139 victory at Philips Arena. The win improves the Hawks, who sit at No. 4 in the Eastern Conference standings, to 28-20 on the season. The struggling Knicks drop another close game to fall to 21-28 on the season and now sit two-and-a-half games behind Charlotte for the No. 8 spot in the East.

For all intents and purposes, the Knicks had no business competing so well. The recent drama surrounding the potential trade of New York star forward Carmelo Anthony has only barely succeeded in drowning out the drama from guard Derrick Rose’s disappearance a few weeks back, which itself momentarily distracted the media from the drama of the Knicks’ poor performance this season. Not to mention the (almost) weekly stir-up revolving around whatever nonsense Knicks’ President Phil Jackson feels inclined to spout off about. In short, there is no end to the theater in New York.

Despite the distractions, the locker room before the game’s tip was loose and relaxed. Knicks’ sophomore sensation Kristaps Porzingis was clapping his hands, making jokes and practicing complex secret handshakes with his teammates before the game, seemingly unaware of the media’s apocalyptic proclamations. All the crap aside, New York has somehow managed to compete well, especially against Atlanta this year.

“It’s a game of who makes those plays at the end,” Knicks’ Coach Jeff Hornacek said before Sunday’s game. “We are pretty evenly matched. We have had three good games, and I expect the same tonight.”

Question Hornacek’s coaching, but his intuition was spot on. For as much speculation and uncertainty 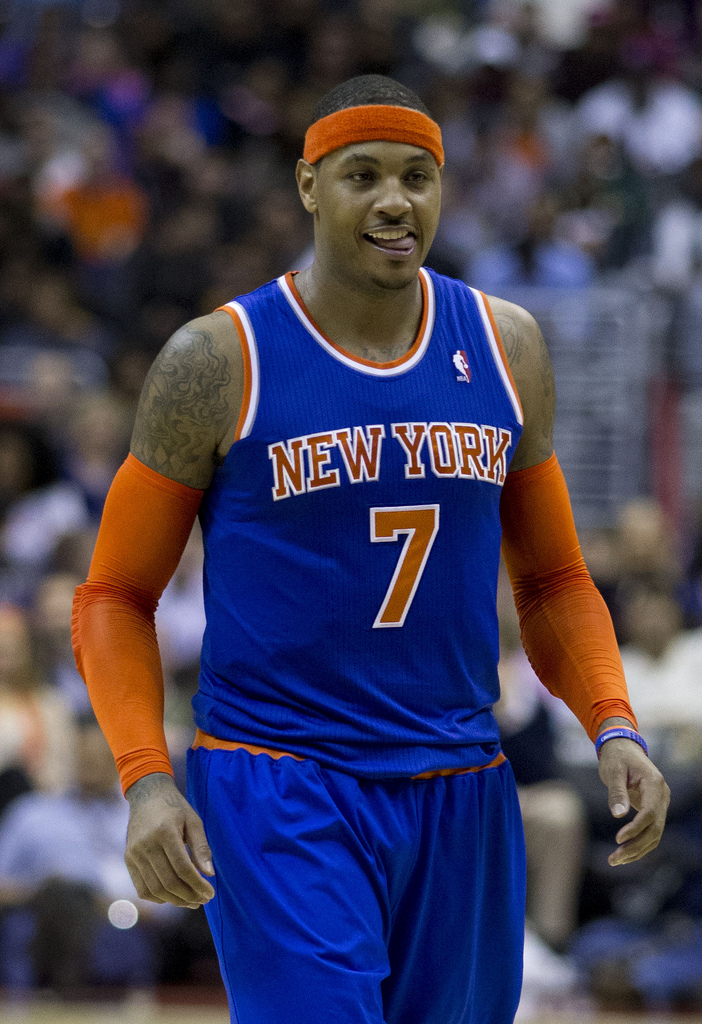 that surrounds Carmelo Anthony, the nine-time NBA all-star played like a man possessed Sunday. Anthony set the tone early, nailing a three on New York’s first possession before torching the Hawks defense for 17 points in the first quarter, giving the Knicks a 37-30 advantage at the break. Often sending two, even three defenders, there was little the Hawks could do defensively to stop Carmelo’s relentless attack as he went on to score 45 points.

“He was shooting so well and scoring over guys that didn’t have more size, and after doing that a few times I felt like putting a bigger guy on him,” said Hawks Coach Mike Budenholzer, explaining his decision to move forward Paul Millsap onto Anthony midway through the game. “Even then, [Anthony] was managing to score no matter who we put on him.”

The absence of Derrick Rose (sprained ankle) from Sunday’s lineup may have played a part in Melo’s aggressive performance, but the Knicks’ bench filled in nicely for the former NBA MVP.

“We have three guys in Brandon [Jennings], Ron Baker and Sasha [Vujacic] who can all play [point guard]. They are all going to have to handle the ball, but I don’t think that’s a problem,” Hornacek said. “It’s business as usual — next guy has got to step up.”

Baker, who found his way onto the New York roster as an undrafted rookie, offered some much needed support, directing the offense while contributing eight points of his own on 75 percent shooting, including a much-needed driving lay-in that stopped the bleeding for the Knicks as the Hawks claimed an 83-81 lead in the third quarter.

“It is always important to stay ready,” Baker said before the game. “Obviously with Derrick out, there is a chance that I’ll get some minutes tonight. My approach offensively stays the same … have a mellow mindset, try and make sure everyone is on the same page and play with what the defense gives you.”

With small forward Thabo Sefolosha out (groin), the Hawks needed some extra support as well. Tim Hardaway Jr. was given the opportunity to start, and despite an abysmal stat line (0-9 from three-point land), he made two consecutive and-one plays in a short stretch during the fourth quarter, energizing the Atlanta crowd and spurring the Hawks to a 95-90 lead.

In the end, Hawks players Paul Millsap and Dennis Schroder were the driving force behind Atlanta’s win. Millsap led all players with 60 minutes of play and finished with 37 points, 19 rebounds and seven assists, while Schroder contributed numerous clutch buckets to go along with 15 assists.

“He is an all-star and a special talent,” Hawks forward Kent Bazemore said of Millsap. “He gets it done.”

In the third overtime period, Anthony’s reign ended as he was forced off the court with his sixth foul. Porzingis, Joakim Noah, Dwight Howard and Kyle O’Quinn would all foul out before the game’s end.

“Our best player, our go to guy, is fouling out, and we have a lot of plays set to feature him, so now you’ve got to make that transition on the fly to be in different spots,” Knicks’ shooting guard Courtney Lee said. “You can’t replace a Carmelo Anthony, but I think everybody that played stepped up, played well and left it all out there.”

With no Carmelo for the final shot, Lee stepped up and splashed a buzzer-beating three to send the game into triple overtime. After a drive from Schroder tied the game at 130, Lee missed a three-pointer on the next possession, but drew significant contact. Controversially, he was not awarded the call, sending the game into quadruple overtime.

With the Hawks clinging to a three-point lead as time expired in the fourth overtime, Lee missed two consecutive three-point attempts to tie the game, ending the marathon match that resulted in a hard-fought Hawks win.

“We had four key players foul out,” Lee said. “That’s unheard of, but we continued to fight, so I ain’t gonna hang my head about anything. Had a great look at the end, but it didn’t go in.”

In a game that lasted almost four hours, losing was excruciating while winning was a relief.

“We played well down the stretch,” Bazemore said. “We didn’t stop fighting and we pulled another [game] out. We had guys foul out, guys play a ton of minutes, but you gotta make plays. That’s what it’s all about.”

Fortunately, the Hawks get a little rest before their next game in South Beach where they will take on the Miami Heat Feb. 1.