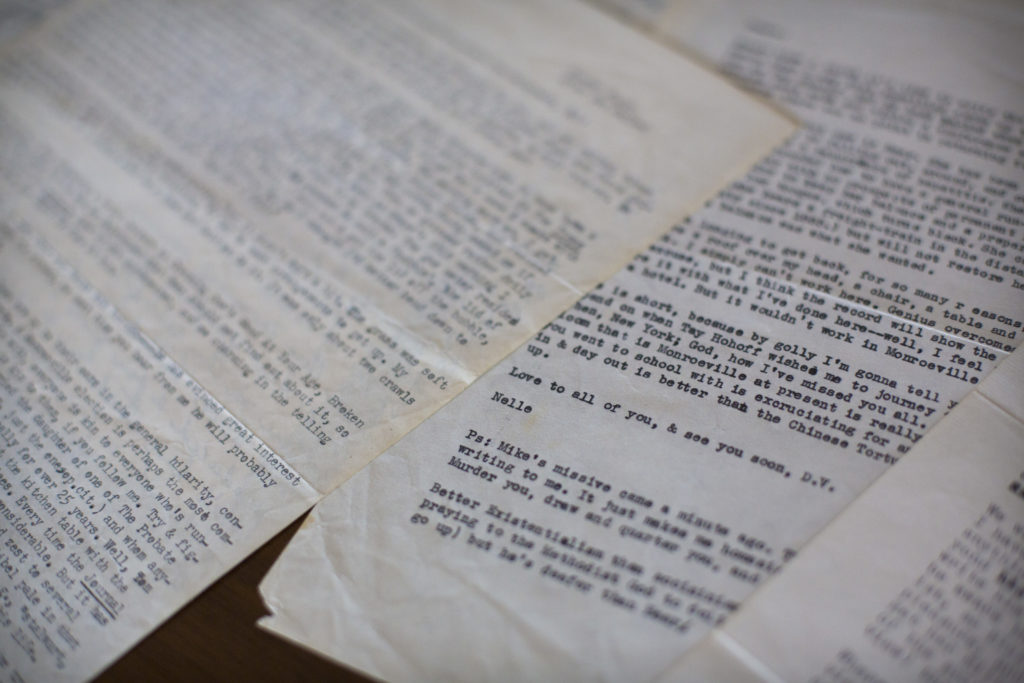 The Stuart A. Rose Manuscript, Archives and Rare Books Library has acquired a collection of personal letters Harper Lee wrote to her friend and architect Harold Caulfield./Courtesy of Ann Watson

A collection of personal letters Harper Lee wrote to her friend and architect Harold Caulfield is set to be open to students and scholars for research purposes at the Stuart A. Rose Manuscript, Archives and Rare Books Library, according to Director of the Rose Library Rosemary Magee.

The letters include Lee’s correspondence with Caulfield and date from 1956 to 1961. She wrote the letters while she was living in her hometown of Monroeville, Ala., according to Magee. Lee wrote four of the letters prior to the publication of “To Kill A Mockingbird” and two after the novel had already become a bestseller and garnered a Pulitzer Prize. Photographs and a signed copy of the book are also included in the collection.

The Rose Library has not planned a display or exhibit yet, which requires extra time, Magee said.

Magee declined to state how much Emory paid for the collection, although Christie’s auction company valued the collection between $150,000 and $250,000 in 2015. The collection failed to sell at the 2015 auction because bidding stopped below the reserve price of $90,000.

Kennerson approached Emory after he provided the collection to Jimmy Carter Professor of History Joseph Crespino to use in Crespino’s research for his upcoming biography of Lee’s father A.C. Lee, Associate Director of University Media Relations Elaine Justice wrote in a Feb. 27 statement to the Wheel. “A mutual contact intermediary” arranged the purchase, Magee said.

The collection must go through a standard “care” and documentation process before it is available for public viewing. A public finding aid and inventory of the collection will be made available beginning April 2, according to Justice’s statement.

“[The collection is] a very personal … [and] significant set of materials that I think are revealing about her,” Magee said. “[Lee writes in the way] that one writes to their friends when they can be candid and responsive.”

The letters reflect some of the themes that are evident in Lee’s writing like social justice and racial inequity, according to Magee.

“You can see through her correspondence how her ideas evolved,” Magee said. “[Lee was] living in a time where there’s great change occurring in the world around her, both throughout the country as a whole and in the South. Her perceptions to that and her place in it are very revealing.”

Crespino’s book entitled “Atticus Finch: The Biography” is set to be published May 8 and serves as a “political and cultural history” of Atticus Finch. The book theorizes that Harper Lee based Atticus Finch, the main character in “To Kill A Mockingbird,” after her own father.

Kennerson told The San Diego Union-Tribune that the letters would complement Crespino’s work while Magee said the professor will “continue to draw from them.”

“This correspondence from Harper Lee, some of which show her at home taking care of her ailing father, provides wonderful insight into her life during the critical years when she wrote what would be her only two novels,” Crespino said in Justice’s statement. “They provide a window into her life and her views during a period of tumultuous change in southern political life.”

Crespino did not respond to the Wheel’s interview request by press time.

Lee’s letters coincide with the library’s collections in literature and poetry, Southern history and African-American history. Magee said the works will be “in conversation” with other recently acquired collections, including those by former U.S. President Barack Obama and authors Flannery O’Connor and Jack Kerouac.

“[Harper Lee’s] lifespan overlapped with O’Connor and Kerouac,” Magee said. “[Although they come from] completely different sites of work and impulses, you begin to learn more about an era and see a set of ideas that are emerging. Unusual conversations begin to occur.”

Magee anticipates the collection will be used in research by students and professors due to the endearing legacy of “To Kill A Mockingbird.” The novel has sold more than 40 million copies since its 1960 release, but it is also one of the most challenged titles due to its inclusion of the N-word and controversial portrayal of the American South, according to The New York Times.

Magee, whose last day as director at the Rose Library is Wednesday, said she is “proud, honored and humbled,” that the collection will be a part of her legacy at the archives.

“[The Harper Lee Collection] broadly represents the mission and enduring focus of the Rose Library,” Magee said. “I encourage everyone, especially students, to use the Harper Lee materials … as an opportunity to reflect deeply on the meaning of life and how one person’s life can make such a profound difference in the world.”

Clarification (2/28/18 at 11:27 p.m.): The article was updated to reflect that the collection will be open to students and scholars for research purposes, but the Rose Library has not planned an exhibit or display yet.