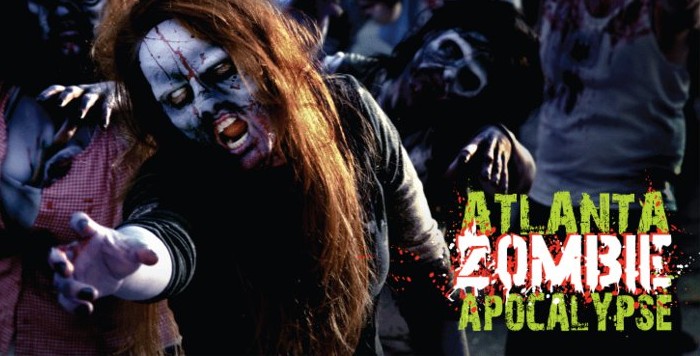 If you don’t have any plans for Halloween, have no fear! There are many Halloween events around Atlanta to get your thrill on! Consider yourself a macho woman or man who can’t be scared by some stranger in a creepy mask? You might be interested in testing your theory at Netherworld Haunted House! At this nationally recognized haunted house, named as one of 2014’s scariest Halloween attractions by Yahoo Travel, The Huffington Post and Travel Channel, it is the Season of the Witch, and the witches are waiting to cast a deadly spell among mankind. Featuring 100 live stunt actors, over 200 animated creatures, intense special effects, detailed costumes and make-up and chilling monsters, Netherworld is on the level of a Disney attraction and is sure to have you screaming for your momma. Even the cast of the zombie apocalyptic show filmed in Atlanta, “The Walking Dead,” recently visited the haunted house and collectively raved that Netherworld was the best haunted house they had ever visited. Josh McDermitt and Alanna Masterson, actors starring in “The Walking Dead,” highly recommend the haunted house, respectively tweeting that their experience was “absolutely incredible” and “[We] got the shit scared out of us! Success!” If you’re brave enough to face this frightening attraction, be careful because the frights start with creepy characters in the parking lot and, even better, the Roswell Georgia Paranormal Investigators have found paranormal activity at the location.

Are you a real adrenaline junkie? Then choose Fright Fest at Six Flags Over Georgia as your trick or treat for the night! Experience Six Flags’ rides and attractions, but at night with frightening characters and monsters waiting for you around each corner. The park’s inviting atmosphere is exchanged for a night of spooks and terror decorated with cobwebs, gravestones, scary zombies lurking through thick fog and other creepy sights. You will be constantly on the edge with eerie and suspenseful music blaring throughout the park, keeping you waiting for the next scare. Better yet, your adrenaline will remain high after riding some of the park’s renowned coasters such as Goliath, a hypercoaster that reaches 200 feet in the air, or Acrophobia, a ride that drops you from 20 stories in the air in a mere three seconds. There are also several haunted houses throughout the park that you can order passes to enter. Best of all, there are shorter lines than a typical six flags adventure in the summer.

If you think you’re prepared for when the zombies invade Earth and threaten the existence of all human beings, challenge your survival skills at Atlanta’s Zombie Apocalypse! The Atlanta Zombie Apocalypse is a Halloween horror attraction like no other where patrons take part in realistic zombie apocalypse scenarios. Instead of walking through a dark and scary maze at a haunted house, you are thrown into the middle of the action. It is up to you to figure out who to trust and how to escape the brain-eating zombies to save your life! Hope you’re in shape because at this attraction you will have to run, jump and hide to survive. If zombie killing is your forte, you can also choose to take part in the “Zombie Killer” attraction where your weapon is a semi-automatic paintball gun with 100 rounds. You must defend yourself from the zombies while trying to escape an abandoned hotel. USA Today has branded the Atlanta Zombie Apocalypse as “the next generation haunted attraction.”​