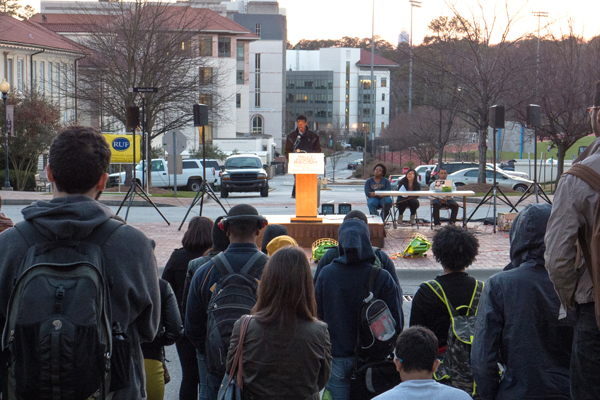 More than 200 students, faculty and alumni attended a rally Wednesday on Asbury Circle to address issues of racism that have occurred on Emory’s campus.

The “Rally Against Racism” was co-hosted by the student group Change @ Emory and the National Association for the Advancement of Colored People (NAACP).

Change @ Emory most recently organized a protest at the opening of the Southern Christian Leadership Conference exhibit in the Robert W. Woodruff Library against University President James W. Wagner’s comments regarding the Three-Fifths Compromise in Emory Magazine.

During the two-and-a-half-hour rally, select students and faculty spoke behind a podium and addressed a variety of issues of race on campus, ranging from “The Dooley Show” controversy to Wagner’s article.

“The events that have taken place on campus this year, to name a few, President Wagner’s article and ‘The Dooley Show’ and so on, aren’t isolated issues,” College sophomore Cindy Park said as she addressed the crowd. “They are indications of the bigger problem at Emory.”

Change @ Emory had been planning to host a rally on the topic of racism since December, but it wasn’t until the controversy surrounding Wagner’s article that they decided that now was the right moment, according to Davion Colbert, a College junior and one of the event organizers.

“Wagner made this comment recently, which really put us over to a place where we really could have pull with the media, with students, faculty and staff,” Colbert said. “Even though that wasn’t the only issue, it was the straw that broke the camel’s back.”

Many administrators attended the rally, including College Dean Robin Forman and Dean of Campus Life Ajay Nair. Vice President and Deputy to the President Gary Hauk attended the beginning of the event. Wagner was not present, as he was out of the state on business, according to Nair.

“I wanted to show my support to the student body,” Nair said. “[The speeches] were really moving. It’s inspiring to all of us to want to make change here at Emory and make our community better.”

Students and faculty said they believe the event was successful given the amount of media coverage it garnered as well as the diverse support from the community it gained.

“The rally had gotten a lot of publicity for the University’s actions,” Herschel Smith (’12C) said. “Hopefully, action will come of all of this. There were a lot of great points for future action for the administration to take and for the Emory community in general to take. The rally was very well-attended with an extremely diverse group of students, which is really great to see.”

While many speeches reflected on both “The Dooley Show” controversy and Wagner’s column, additional issues that have not been as dominant in campus discussion were raised during the rally.

A major point of discussion during the rally was conduct disparities and issues of race within Greek life at Emory.

Christian Conway, a College senior, presented a speech that outlined issues of concern to minorities about Greek life at Emory.

Conway explained that the removal of both the Alpha Phi Alpha and Delta Sigma Theta played a major role in “systematic racism at Emory.”

“Many may not know that Alpha Phi Alpha had the only technical historical black house on an all-white Greek Row,” Conway said.
“It threw many events that contributed to the health of a positive social scene for minorities on campus.”

Conway explained that she believes that there is a double standard between “white fraternities and sororities” and “minority fraternities.”

“We are asking for white fraternities and sororities to not be able to do what they please due to the color of their skin, while African-American groups are targeted, criminalized, judged and boxed into a category that is hard to get out of,” Conway said.

Many representatives from the Interfraternity Council (IFC) attended the event, including IFC President and College junior Jason Stern.

“As Emory students, we are interested in what is happening on campus,” Stern wrote in an email to the Wheel. “We are aware of many of the concerns other students have about racial inclusion in the Greek community, and we went to the rally to learn more.”

According to Stern, IFC plans on discussing issues of race at their next general body meeting on Tuesday.

“[IFC] recognizes that a diverse community brings challenges and opportunities to talk about how race, ethnicity and diversity plays into the fraternity experience,” Stern wrote.

Another point of discussion addressed the issue of minorities being left without a “safe space,” since the closure of the Black Student Alliance (BSA) House.

Speakers at the rally explained how minorities have no place to celebrate their culture and experiences. They identified this lack of a “safe space” as a fundamental hurdle moving forward.

Conway said the removal of the BSA house “left a black hole in the community.” She added that the house was eliminated “with little to no explanation and coldness to the people affected.”

Nair said in an interview with the Wheel that the house was closed because it is in very bad condition.

“[The house] would need significant renovation to be reopened so [the Office of Campus Life] is exploring several other options around this black student union idea around the DUC and other spaces that could potentially provide students with a ‘safe space,'” Nair said.

According to Colbert, black students are looking for a place similar to what Jewish students currently have at the Hillel house.

“We want a space that promotes black heritage and black culture, but it is open to all – similar to the Hillel that promotes Jewish culture and Jewish heritage,” Colbert said. “But it’s not like, ‘oh only Jews are allowed.'”

Department Changes and Effects on Minorities

Discussion regarding the December 2012 department cuts also resurfaced during the rally when Navyug Gill, a member of the Student Re-visioning Committee (SRC) and a doctoral candidate in the History Department, presented a speech on the “racialization of Emory Cuts.”

“[The cut programs] contain some of the highest numbers of students of color and from abroad,” Gill said. “Twenty-five percent of students in the [Institute of Liberal Arts] are minorities, while 40 percent of students in the [Department of Educational Studies] are African American, the highest population of any department in the University. In terms of faculty, whereas only 15 percent of the total University faculty are of color, the cut departments contain anywhere from 20 to 48 percent faculty of color and the decision to make these cuts were made by a group of eight white people.”

During the course of the rally, members of the SRC handed out flyers, outlining the impact of the department changes on faculty members of color.

The flier noted that one-fourth of faculty of color in the College will lose their jobs as a result of the department changes.

Additional points of discussion were made on the prospect of creating new General Education Requirements on race education, the faculty perspective on Wagner’s comments, the lack of institutional support for black males and structural issues and culture on campus.

Since the rally has brought up many different issues, some students said they feel the event could create more of a campus dialogue.

“[The event] was a good start, but it is now up to the administration to make a change,” College senior Alecia Boone said. “We can talk about it all we want to, but unless somebody is going to be the person up there to make the change, then nothing is going to happen.”

M. DeLa Sweeney, the assistant director of the Office of Multicultural Programs and Services, attended the event, too, and commented that moving forward, Emory has a lot of work to do.

“I don’t think there is a single solid direct solution,” Sweeney said. “A step in one direction could be by one perceived group, as a step in a different direction.”

Sweeney said he believes that the movement cannot stop at just discussion. He said action needs to be taken.

“I don’t want [action] to be hastily made, but I don’t want them to be late either,” Sweeney said.

Stephanie Llanes, vice president of College Council and member of Change @ Emory, concluded the rally and discussed a plan in which she will provide recommendations to University administrators to facilitate movement forward.

In an email to the Wheel, Nair and Provost Claire Sterk wrote, “Over the next several months, you will have a number of opportunities to contribute, guide, lead and provide invaluable input. During this critical time, we must collaborate, for true change comes only from an engaged community.”