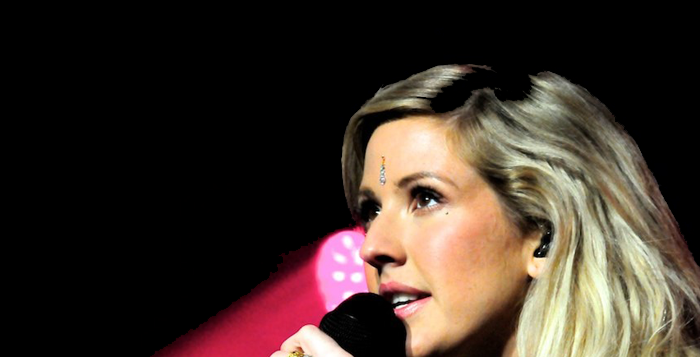 The Fox Theatre is among Atlanta’s most famous and historic venues for live entertainment. Because of its rich history, which dates back to the 1920s, its central location and the prominent artists and performances that it attracts, the Fox has become one of Atlanta’s most beloved landmarks.

Meanwhile, Kassia Conway (better known as just Conway) is a newly signed, electro-charged, dance pop artist with a bada– attitude and killer vocals. Ellie Goulding is a pop singer with a piercing, emotive voice and a slew of radio hits. Together, they created a concert made for dancing, jumping and just having fun. The problem? The Fox, in all of its glory, was just not the right venue for the show.

Before she even picked up the microphone to sing her first notes, I could feel Conway’s vibes. She walked on stage exuding unadulterated confidence, wearing a full-body cat suit. As she began her set, the Atlanta crowd fed her energy, head bobbing and dancing along to each and every track. The songs were almost exclusively off of Conway’s first EP Big Talk, but the sound was more mature than one would expect for a first effort.

The electronic pop melodies and upbeat rhythms made the songs easily accessible to fans of headliner, Goulding. Their styles are similar: powerful female vocals, catchy hooks and a genre-defying band. But Conway’s style is a bit edgier, and the music has a stronger electronic influence. Conway’s band was talented, but it was clear that the members were uncomfortable, and the act’s stage presence suffered as a result. Conway attempted to get her bandmates psyched up and her energy alone managed to carry the short performance. However, if Conway expects to move into that headliner spot some day, the band will need to operate more as a unit.

The audience was more reserved and jaded than Conway probably hoped. This was mostly due to the fact that Conway is an emerging artist and her songs are simply not as widely known. However, a couple of her hits, including “Big Talk” and “Hustler,” have been utilized in the media lately, such as on HBO’s “Girls” and “Last Call with Carson Daly.” Critics are beginning to recognize and appreciate her first release, and as a result, Conway has shown up on several “Artists to Watch” lists, such as one from Rolling Stone last month. These two songs served as highlights in her set, exuding pure joy and Conway’s clear passion for music.

One aspect that could benefit Conway’s set would be a cover, a song that the audience would know well enough to get up and sing and dance to. Perhaps, this could have enlivened the crowd and allowed her to show a different side.

Still, Conway made good use of her short 25-minute set and certainly gained a few fans along the way. As I said earlier, the venue was limiting and thus put a restraint on the success of this performance. Audience members were stuck in their seated rows and were unable to dance together as would have been possible at a venue like Downtown’s Tabernacle.

After a 30-minute break between acts, the theater went dark, and girls began screaming at the top of their lungs (like, Justin Bieber level) in anticipation of one of the biggest new pop stars of this decade. My expectations were high. I was first introduced to Goulding through her hauntingly beautiful rendition of Elton John’s “Your Song,” but once she released a string of fabulously successful dance hits, it became clear that she planned to go a completely different route with her music. And based on her live performance, it seems that Goulding should have stuck to a simpler, sleeker, more acoustic approach.

The pop star has been on tour for some time now, so I expected a well-polished set and musical refinement. Instead, the songs felt disjointed and unoriginal.

The venue would have highlighted Goulding’s delicate vocals and unique tone, but instead, most of the set was comprised of generic body grinding and forced emotion.

The production team clearly influenced Goulding, and it was just too obvious to bear. It was sad, actually, to see such talent confined to basic pop songs and common performer tricks.

Goulding did end the show on a high note, with her biggest hits like “Lights,” “Anything Can Happen” and “Burn.” But even at her best, the acoustics did not allow her vocals to really shine – it all seemed lost in the world of commercialized pop stardom. It seems that Goulding needs to figure out who she is and perhaps do something to challenge the existing standards in her genre – whatever that may be.

On the whole, I’m still glad I attended this concert.

Despite my quarries with Goulding’s set and the venue choice, I was exposed to a new artist who came off as genuine and poised for success. It’s one of the great things about live music: it’s full of surprise.