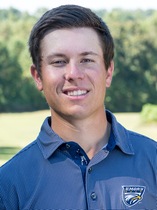 Max Schwarz was named UAA Athlete of the Week for the week of Oct. 18. (Courtesy of Emory Athletics)

The Emory men’s golf team sat on a comfortable eight-stroke lead going into the final round at the Tartan Invitational on Oct. 12. Senior Max Schwarz was leading the tournament and the entire team posted great scores the previous day.

Carnegie Mellon University (Pa.) hosted the tournament at the Laurel Valley Golf Club, a beautiful but long course in Western Pennsylvania. On the final day, the course felt a little less beautiful and a lot longer. The wind picked up, blowing strong.

The Eagles’ eight-stroke lead quickly turned into a two-stroke lead. The team needed strong play on the last nine holes into the wind to hold on to a narrowing lead.

After a double bogey to start his round, Schwarz played like he had a chip on his shoulder. His bogey-free final nine holes maintained the two-stroke lead, and the Eagles held on to win the team championship with a three-round total of 905 (299-297-309).

Schwarz’s patient performance earned him the honor of UAA Athlete of the Week on Oct. 18, as he once again delivered for the Eagles.

Schwarz’s work-hard mentality started when his golf stopped. In his freshman and sophomore years of high school in Paradise Valley, Arizona, Schwarz was cut from his school golf team.

After two years of hard practice, though, Schwarz secured his spot on the team his junior year. He continued improving and played well enough to consider college golf. Schwarz began his own recruitment by sending an email to the Emory men’s golf head coach John Sjoberg, where he introduced himself and expressed interest. Sjoberg did not respond.

So Schwarz sent another email. He mentioned that he would be attending the Ivy Golf Institute, a camp for college prospects to strut their stuff. This time, Sjoberg responded and told Schwarz that he was excited to see him play.

Sjoberg saw Schwarz play only two holes at the Ivy Golf Institute. Schwarz landed the ball on the green of the first hole, but he putted four times to record a triple bogey.

On the second hole, Schwarz bounced back for a well-earned par, but when he walked to his next hole, Sjoberg had moved on to watch another set of golfers play. In his head, Schwarz crossed Emory off the list.

“Now that I’m a little more mature, I recognize that when college coaches come watch you play, they know your scores and what you’re capable of on the scorecard,” Schwarz said. “They’re really just looking at how you respond to adversity.”

Sjoberg welcomed Schwarz onto the team in 2018, but as a freshman, Schwarz needed time to adjust from seeing cacti line the fairways to trees. He still played fairly well his freshman year and averaged 75.4 strokes per round.

Schwarz entered his sophomore year confident for the D-III National Championship Preview in fall 2019. But as he practiced the course, the same problems returned – Schwarz rushed his swing and couldn’t hit the ball straight.

“I was too quick with my hands, my body couldn’t catch up,” Schwarz said. “So I just started thinking before every single shot ‘good tempo, good tempo.’”

During the tournament, he slowed down and found the “good tempo” he was looking for. Schwarz finished fifth out of 120 competitors at one of the best tournaments in the country for D-III golf. In his sophomore year, he shaved off almost four strokes with an average of 71.85 strokes per round of golf.

As his career at Emory has continued, Schwarz has passed on his magic to his teammates.When sophomore Logan Lowery joined the Emory golf team in 2020, he looked to Schwarz as a role model. But instead of tips on technique, he received a lesson in patience. After a bad shot, Lowery tended to walk very fast ahead of everyone else in the group.

“Max did a great job of helping me check myself and slow it down,” Lowery said. “His advice transitions to every single part of playing golf. Do everything deliberately, and you will get to the top.”

Schwarz and the entire team have maintained a competitive mindset in practice that has translated into results. They continued their winning ways from the Tartan Invitational and dominated at the Golfweek Invitational in Sandestin, Florida, for a second consecutive tournament win. The ultimate goal is the NCAA Division III National Championship in May, but they face a long spring season ahead.

Schwarz wants to put his head down and continue improving as an individual and a team to reach that goal.

“I would sacrifice every other award possible to get one national championship as a team,” Schwarz said. “And we’re building as a team to get there.”