From predicting American Idol Winners to the spread of the swine flu, Bruno Goncalves (01G) has used huge amounts of data to help predict the future.

Using big data science to model human behavior has allowed Goncalves to make discoveries in a variety of fields ranging from politics to American reality television. Such discoveries would have been completely impossible 15 years ago.

Originally from Portugal, Goncalves received his master’s degree in computer science and a doctorate in physics from Emory in 2008 under the advisement of Department Chair of Physics Stefan Boettcher. At the time, big data was still relatively obscure at the time since capable software systems were only just beginning to emerge. Still, Goncalves used his background in physics and computer science to create new applications for data science, which he is still doing today.

Goncalves took advantage of Emory’s public health network and applied his skills to predict the spread of the nationwide swine flu outbreak in 2009. By developing and testing programs to create outbreak models, he and a team of Emory researchers were able to generate reasonably accurate predictions about when the flu’s spread worldwide.

“With what we can simulate, we can have [a] type of early warning system,” Goncalves said.

Jose Javier Ramasco, who shared an office with Goncalves while studying as a postdoctoral researcher at Emory, noted the significance of Goncalves’ work in the project.

“These kinds of tools are going to become fundamental for any authority trying to protect the population from disease spreading,” Ramasco said regarding the programs developed by Goncalves’ team. “Data science … is a major advance of the last decade [because it allows us to view] society on a computer and extract realistic predictions.”

Since leaving Emory in 2008, Goncalves has spent the last 10 years working at New York University (NYU), Indiana University at Bloomington, Northeastern University (Mass.) and Aix-Marseille Université in France. He currently serves as Vice President for Data Science and Finance at JPMorgan Chase. During this time, his work overlapped with multiple other fields, such as linguistic and financial analysis, which have helped him broaden his discoveries. 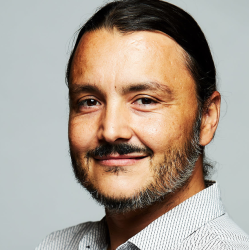 While working at Northeastern University in 2012, Goncalves began analyzing political tweets. At the time, Twitter was not used yet by prominent political figures in the same way it is today.

Goncalves and his team wrote a paper postulating that the right-leaning Twittersphere tends to be more politically active and interconnected than the left, allowing its users to share political information more efficiently.

In one project at NYU, Goncalves and a colleague examined how tweets from around the world can show how the English used internationally is gradually changing from British English to American English.

“In Europe, [though] people are learning British English… we started seeing an increase in American vocabulary,” said Goncalves.

In another project, Goncalves used Twitter data to understand the use of different Spanish dialects in different regions of Spain. Through his use of Twitter data, Goncalves has allowed researchers to discover trends language change. This confluence of linguistics and big data made him notable to colleagues.

“The advent of large-scale online social media services implies that we can, for the first time in history, perform a detailed analysis of how language is used informally around the world,” wrote Goncalves and co-author Daniel Sanchez in their paper about Spanish dialects .

A data scientist and friend of Gonclaves Naomi Derzsy attributed much of Goncalves’ success to his intellectual drive and determination in the face of failure.

“[Goncalves] is an extraordinary scientist, [and is] constantly on a mission to apply his passion and expertise in physics to solve real world problems through data,” Derzsy said. “[His] endless curiosity always makes him learn new tools and technologies … [and] he is probably the most optimistic person that I know…[and] never lets any failure affect him,” Derzsy said.

Goncalves was also involved in a project at Northeastern University in which he and several colleagues predicted the 2012 American Idol winner Phillip Phillips. By considering the number of tweets referencing each contestant, they attempted to predict the winner before the show officially announced them.

Though they initially failed, the team eventually adjusted their prediction model to get more accurate results. They found that the tweets with geo-locations were particularly important in predicting show outcomes because there were strong regional polarizations, according to the paper detailing the project.

Now working in finance, Goncalves synthesizes large quantities of data for investment banks to help them better profit from the market. Without big data scientists, it would be impossible for finance industries to analyze markets on the current scale, according to Goncalves.

These changes have afforded Goncalves a diverse range of opportunities, and he hopes to explore new applications of the technology.

“Data science will only become more important in the future,” Goncalves said.

Goncalves said he plans to continue investigating the uses of big data in finance and is looking forward to exploring future developments in the field.