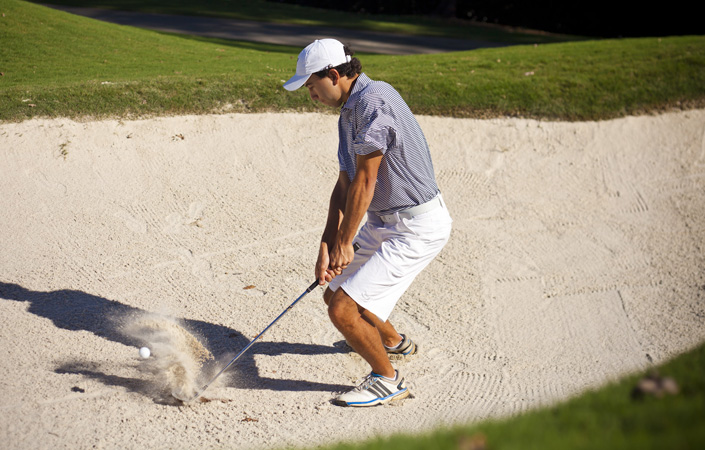 The Emory men’s golf team put together its best performance of the season so far Oct. 3 and 4, finishing fourth out of 18 teams at the Oglethorpe Fall Invitational at Royal Lakes Golf Club in Flowery Branch, Ga.

Emory’s 36-hole team score of three over par was enough to separate the Eagles by 10 strokes from the next best team, Centre College (Ky.). Finishing ahead of Emory were Greensboro College (N.C.) in first, LaGrange College (Ga.) in second and Oglethorpe College (Ga.) in third.

Freshman Matt Organisak, who finished fifth overall, headlined Emory’s improved play. He put together a two-round score of four under par. In only his third collegiate tournament, Organisak put together one of the best 36-hole performances in Emory history.

Organisak wasn’t the only Emory freshman to finish within the top 10. In his first collegiate competition, freshman Chuck Isgar carded a score of two under par, which was good enough for seventh overall. Junior Sean Murphy joined teammates Organisak and Isgar in the top 10, ending tied for 10th overall with a score of even par.

The golf team’s performance during the Oglethorpe Invitational is a major turnaround from the first two tournaments of the Fall 2016 season. Emory began the season with lackluster finishes in back-to-back tournaments. A sixth-place finish to start off the season was followed by a failure to crack the top 10.

In desperate need of a confidence booster, the Eagles found much needed redemption Monday and Tuesday.

Sjoberg highlighted some of the team’s improvements this past weekend.

“It was better quality golf. Especially off the tee, I thought we were very good. We were very good driving the golf ball for most of both rounds, and that was a big key to this golf course.”

Sjoberg predicted that the freshmen’s significant contributions signal a bright future for the golf team.

“Matt [Organisak] was great. It was great to see [Chuck Isgar] play well and finish in the top,” Sjoberg said. “They are going to have a major impact going forward. We have a fairly young team with no seniors. Hopefully this is a sign of things to come.”