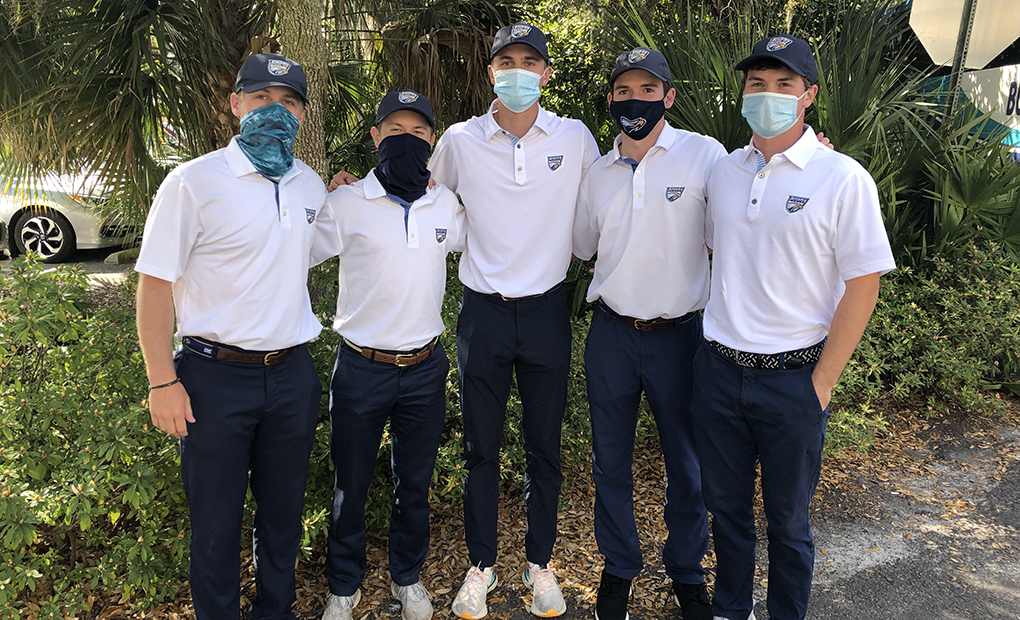 Emory University’s women’s golf, women’s tennis and men’s tennis teams made their season debuts this past weekend, joining the softball, baseball and men’s golf teams in resuming intercollegiate competition. All teams came to win this weekend and here is how each team performed.

The Eagles competed hard on March 20 in their return to play, winning a doubleheader against the Tigers of Sewanee: The University of the South (Tenn.). With only one match lost the whole day, Emory defeated the Tigers by scores of 9-0 and 8-1.

In doubles play, the Eagles had wins at the second and third positions and pulled out a victory at first doubles as well. Seniors Ysabel Gonzalez-Rico and Katie Chang won 8-7 while junior Christina Watson and senior Stephanie Taylor took an 8-2 win. Freshman Ana Cristina Perez made her collegiate debut with sophomore Katelyn Thomas, sailing by 8-1.

In the day’s second match, the Eagles carried over their momentum and swept in doubles while claiming victories in five of the six singles matches. Watson and Taylor won at the first position 8-5, Gonzalez-Rico and Chang trumped their opponents 8-1 and Perez and Thomas rounded out doubles with an 8-3 triumph.

The Eagles went with the same singles lineup as match one. Gonzalez-Rico did not drop a game, winning 6-0, 6-0 in the first position. Watson, Fatemi, Goetz and Perez also won their singles matches.

The Eagles have some time off before returning to action next month with a match at Georgia Southern University on April 4.

The Eagles started their season strong on March 20, claiming a pair of 7-2 wins over the Sewanee Tigers.

The No. 1 doubles team junior Hayden Cassone and sophomore Antonio Mora won their matches 8-4 and 8-2, defeating sophomore Liam Baer and senior Alejandro Becker of Sewanee. Senior Will Wanner and freshman Ryan Glanville had two victories at second doubles, ousting their Sewanee opponents 8-3 in both matches.

The team will look to carry their momentum into their next match on March 26 at Georgia Gwinnett College.

The women’s golf team competed in the Jekyll Island Women’s Collegiate in Jekyll Island, Georgia from March 19 through March 21.

However, after finishing in sixth place on days one and two, the Eagles posted a score of 336 over the final 18 holes of play for a three-day total score of 976, tying the No. 10 University of Mary Hardin-Baylor (Texas) for fifth place out of 16 teams.

Freshman Rebecca Schiffman stood out in the tournament,leading the team and ranking eighth overall of the tournament’s 82 golfers with a total score of 237. Sophomore Ksheera Jalakam tied for 19th with 245 while freshman Mariana Chong finished in 26th place in her first collegiate tournament.

The Eagles return to play from April 2 to April 4 as they take part in the Golfweek Invitational at the Mission Inn Resort in Howie-in-the-Hills, Florida.

At the Jekyll Island Collegiate, the No. 2 Emory men’s golf team finished in third place out of 25 teams on Sunday, posting a total score of 880.

The Eagles finished day one in second place after freshman Logan Lowery led the team with a phenomenal four-under par 68. Junior Max Schwarz then posted the best score on the second day with a two-under par 70 as the Eagles found themselves in third place going into the final round.

On day three, Schwarz continued to perform, shooting an impressive even-par 72, making it his fifth consecutive score of par or better this spring. Schwarz finished with 13 birdies and tied for second out of 133 competitors with a four-under 212 over the weekend. His outing tied the program’s 11th best score for a three-round tournament.

Sophomore Grant Drogosch and junior Logan Ryan tied for 31st overall with a total of 225. Lowery finished the weekend tied for 43rd place.

The baseball team lost two of a three-game series against the LaGrange College (Ga.) Panthers over the weekend. On March 20, the Eagles won the first game 5-3 but lost their momentum in the second, falling 8-11. Junior pitcher Jack Brodsky earned the victory in the first game, allowing two runs and three hits while striking out eight in six innings. Sophomore pitcher Aaron Mishoulam picked up his first save of the season, not surrendering a run even as LaGrange had the go-ahead run at-bat.

In the second game, the Eagles allowed nine runs in the first three innings and were not able to make up the deficit. Senior pitcher Jack Moore gave up nine runs on 12 hits in 2 ⅓ innings pitched. Junior pitcher Kyle Sulkowski replaced Moore and did not allow a run in 2 ⅔ innings. Five Eagles produced multiple hits, but those were not enough to pull out a win.

On March 21, the Eagles lost the final game of the series 9-4. The Panthers took an early 4-0 lead in the first inning, putting the Eagles in a tough situation from the start. Senior pitcher James Robertson made his season debut, throwing 3 ⅓ innings and allowing six runs on five hits and five walks.

Baseball looks forward to playing a doubleheader on March 28 at Maryville College (Tenn.).

The softball team handily defeated Piedmont College (Ga.) in a doubleheader on March 20. The Eagles won 8-1 in the first game and 4-3 in a closer second game.

Junior catcher Krista Colussi hit a two-run single that brought home freshman utility Rachel Cocolis and freshman outfielder Page Nellis. Colussi also picked up her third RBI of the game with bases loaded during the fifth inning after being hit by a pitch. Junior first baseman Mattie Ryan added to the team’s output, recording a hit in all three of her plate appearances and scoring two runs. Senior pitcher Madison Schaefer threw a complete-game three-hitter, striking out seven while allowing only one walk.

In the second game, Ryan and senior Allie Moberg each added one RBI. Schaefer threw five innings and allowed only two runs on seven hits. The Eagles scored three times in the sixth inning with Ryan, Nellis and junior outfielder Megan Weisenberg bringing in runs. The Lions gave the Eagles a scare by fighting back in their last time up, scoring twice and placing the tying run on-base, but Schaefer secured the win by striking out the last two batters.

Now 3-1, the softball team is scheduled to play on March 27 at Georgia Gwinnett College.

Emory’s men’s golf team poses for a photo at the Jekyll Island Collegiate. The team finished the tournament in third place. (Courtesy of Emory Athletics)