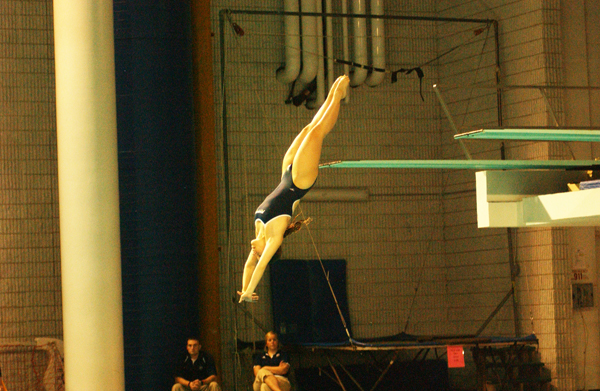 The men’s and women’s swimming and diving teams are both attempting to win their 15th consecutive University Athletic Association (UAA) title as they traveled to Chicago on Wednesday for the UAA Championships.

Preliminary events began Wednesday afternoon with the men’s one-meter dive, but the competition will run all the way through Saturday night.

Ever since Head Coach John Howell took over the program in 1999, neither the men’s or the women’s team has failed to secure the conference title.

The women’s team is currently ranked first in Division III, according to the Feb. 8 College Swimming Coaches Association of America (CSCAA) Poll.

The 2012 UAA Rookie of the Year, sophomore McKenna Newsum-Schoenberg, has the Eagles’ top marks in the 1000-meter free as well as the 1650-meter free.

The men’s team also boasts the returning UAA Swimmer of the Year in senior Peter O’Brien, who has posted the team’s best times this season in the 100-meter breaststroke, 200-meter IM and 400-meter IM.

The men, with a season record of 1-6, hung tough with schools like Florida State University and the University of Georgia before dominating several D-I schools in the Miami Invitational.

The women entered the championship meet at 4-3, having bested a pair of D-II teams in Florida Southern University and the University of Tampa.

Competition began on Wednesday with the men’s diving preliminaries. The first Emory athletes to compete were Dobben, senior Ann Wolber, junior Ellen Schafer and sophomore Nancy Larson in the women’s 200-meter freestyle relay, all of whom started the Eagles on a good foot with a first-place finish and time of 1:33.59.

The men’s team of senior Richard Upton, junior Jake Stephens, sophomore Andrew Dillinger and freshman Matt Kuhlik followed in the same event with a second-place finish and a time of 1:24.06.

Beach chipped in a strong performance in the women’s 500-meter freestyle, leading a pack of five Eagles in the top seven spots with a second-place finish.

Emory dominated the 50-meter freestyle preliminaries as well, with the women claiming five of the top six spots while the men earned two of the top three. Bass claimed the top spot in the men’s race.

There is a long way yet to go for both teams, but the Eagles are off to hot starts in their bids to claim a 15th straight conference title.

No matter how the championship meet finishes, it will be the first stepping stone to potential national championship runs for both squads.