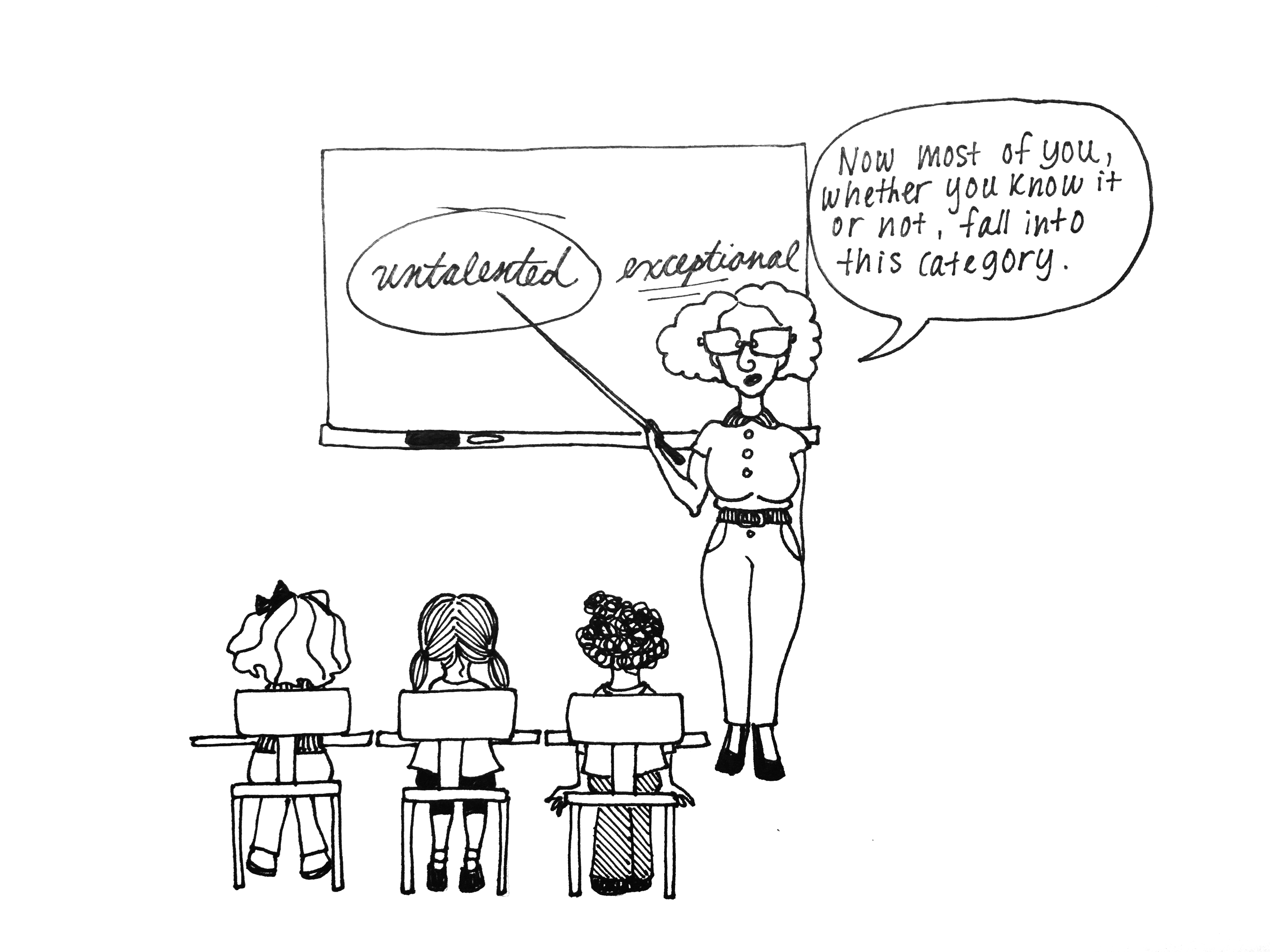 When I was in second grade, my teacher called my parents in for a conference to warn them about an observation she had made about me.

“She isn’t what I would call ‘gifted,'” the teacher told them. “I wouldn’t hope for too much if I were you. She can’t handle it.”

Today, reflecting on a story my parents never fail to repeat, I am struck by the tendency for teachers to place their students within categories. In the past few decades, thousands of elementary and middle schools have implemented “gifted” or “talented” programs to supposedly single out the students with potential from those without it.

So, what happens to the other kids, the students who are supposedly not gifted? Sociologist Brenda Ring believes that self-esteems and self-concepts are immediately put at risk. Furthermore, “ungifted” students tend to stick to the label; they fail to challenge themselves, attributing this to their “lack of talent” or “smarts” for the harder classes. Ultimately, this creates a lag in the system. While a hundred students are excelling under the praise associated with “gifted classes,” a thousand more kids are cutting themselves off from the potential they are told they do not have.

According to Ann Robinson of Western Illinois University, “the gifted are labeled because they deviate from the norm in a positive way. They are ‘above average’ in intelligence or creativity or in whatever constellation of factors used to identify them.”

But what the system and, surprisingly, recent research in the field both fail to question is the supposed impact of separation not on the “gifted” but on the students who are not. What happens when a second grader is told she isn’t “gifted?” What happens when she continues to hear this until she believes it?

How can we expect our elementary school students to learn and grow a love for learning if they are told they are not talented or unintelligent? Most importantly, how can these kids believe in themselves if they are aware that the education system does not?

In his book Ungifted: Intelligence Redefined, author Scott Kaufman explores these questions through his experiences as a child who suffered the backhand of gifted labeling.

“In this artificial world of school we created,” he writes, “labeling is important. Individual differences collide with limited resources, creating a situation where parents are scrambling for special services for their children. With the future of so many lives at stake, it is crucial that we scrutinize exactly how we identify those who do not fit the norm, since the methods we use affect our interventions as well as our expectations of just how high we allow them to soar.”

“I firmly believe,” Kaufman continues, “we can recognize and value every kind of mind without diminishing the value of others. I do not see intelligence as a zero-sum game: just because someone is talented (whatever that means) by the standards set by society does not mean that the person who isn’t does not have dynamic potential for intellectual functioning. There are so many different paths to success.”

It was years until my parents told me about my second grade teacher’s conclusion. Still, somehow, I remember feeling different for being part of the “other group.” I remember watching the “gifted” kids reading poetry while the rest of us were still finger-painting. I remember explaining my failed spelling tests to my parents with the excuse of not being “like the other kids.”

Why do we limit or label children because they do not fit some standard system of talent? What is talent, really? Are we born with it? Or do we acquire it through work and perseverance? Michael Phelps wasn’t born swimming, yet we call him talented. Albert Einstein’s lack of communication skills and behavioral problems led his school teachers to assume his incompetence, yet he remains one of the most renowned physicists in history. Thus, if talent is built, why do we look for it so early and isolate students for the lack thereof?

Why? Because a system that was created to boost a part of America’s children has ultimately left the vast majority of them behind. Eleven years after being labeled, I still remain plagued by questions.

What would have happened if my parents had stuck to what this teacher told them? What if they hadn’t believed in me or pushed me to keep challenging myself? Where would I be now?

Letter From the Editor: Addressing the Wheel’s Complicity