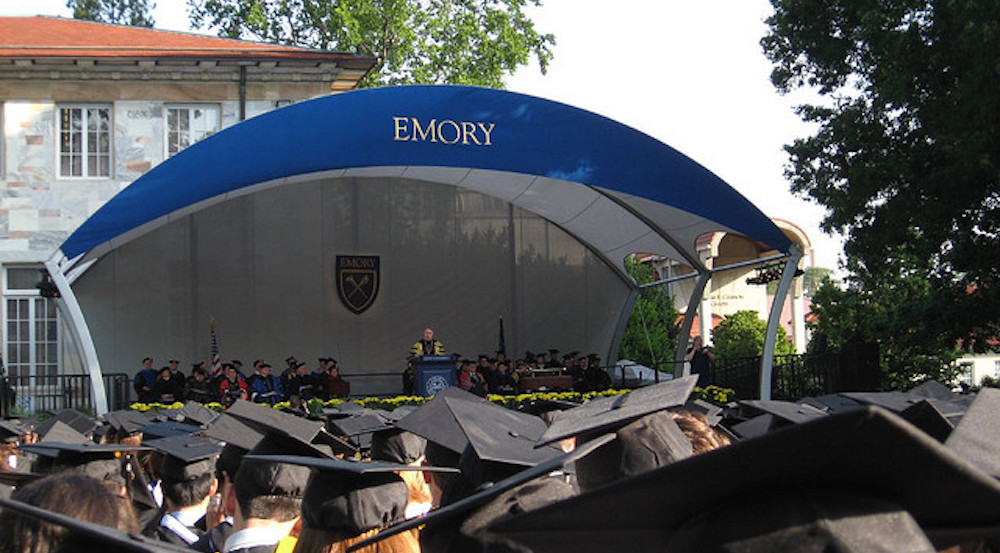 In 1962, the Emory University School of Law won a Georgia Supreme Court case overturning segregation measures in private schools, allowing them to admit students of color without losing the School’s tax-exempt status.

More than 50 years later, another development marks the School’s ties to civil rights.

An anonymous donor has gifted the School of Law with $1.5 million to fund a John Lewis Chair in Civil Rights and Social Justice, the School announced at a Diversity Speaker Series panel discussion on Monday.

“I was extremely excited about the gift,” said Robert Schapiro, dean of Emory Law and Asa Griggs Candler Professor of Law. “We thought it would be a wonderful opportunity to enhance our academic excellence [and] emphasize the importance of civil rights and social justice.”

The School has already begun a fundraising period to raise an additional $500,000 to fully fund the new scholar, which Schapiro said will hopefully be completed in six to 12 months. He added that the School will begin the national search for a professor this summer, focusing on a scholar who will become an Emory professor focused on research and teaching in the area of civil rights and social justice.

Joella Hricik, associate dean for development and alumni relations for the School, said this is one of the most significant gifts the School has received.

She added that the anonymous donor believes that Lewis — who has served in Congress for three decades from 1986 till today, is a co-founder of the civil rights group Student Nonviolent Coordinating Committee (SNCC) and is the only surviving speaker of the 1963 March on Washington — holds a central place in Atlanta’s civil rights legacy.

“As we’ve recently marked the 50th anniversary of several milestones of the civil rights struggle, it seems especially fitting to honor a living icon of the movement who has continued to fight for civil rights and social justice throughout his entire life and career,” the donor said. “We hope that a professorship at Emory Law School in his name will in some small way help to continue the good and great work that he has done these last 50 years.”

Dorothy Brown, a professor of law at the Law School, who teaches a seminar about race theory and who will be co-facilitating this fall’s University course “The Ferguson Movement,” called the establishment of the new chair an opportunity to solidify Emory’s ties to Atlanta and “carry the baton forward.”

“I think that the Law School has a rich history [of championing civil rights],” she said. “I think this brings that history forward to the 21st century … I see this as building upon what we have before, but basically a new chapter. We are turning the page here in a phenomenal way.”

Along with the 1962 lawsuit, Schapiro said the Law School exemplifies a commitment to diversity in other ways, such as the C. Robert Henrikson Endowed Scholarship Fund to support, to attract and retain students from diverse backgrounds, a partnership with the undergraduate law journal at Morehouse College and Spelman College and a visiting day program that targets underrepresented groups.

“Having a faculty professorship named after Congressman Lewis will be a very visible reminder of the Law School’s commitment to diversity and will help advance our scholarly and teaching mission in areas of civil rights and social justice,” Schapiro said. “So it is quite special to be able to combine our interests in research and faculty of great academic distinction with this ongoing commitment to diversity and inclusion.”

Others outside the School hope to gain from this opportunity as well. Interim Chair of the Department of African American Studies Andra Gillespie, for example, said she sees many synergies between this new position and her department.

“There are all kinds of possibilities and ways that [the new chair] could get involved with the life of the University that actually transcends their appointment in the Law School,” she said. “So we hope that whoever they choose will be the type of person who would actually be willing to engage scholars across all kinds of interdisciplinary fields.”

Lewis told Creative Loafing that he would like the scholar to research issues such as police brutality against unarmed African American people.

“Maybe someone can conduct a study on the violence,” Lewis told Creative Loafing. “We’re losing too many people to gun violence in communities on the part of law enforcement. It’s frightening to contemplate about what’s happening in so many urban centers all around America. Maybe Emory and other institutions, lawyers and scholars, can find out why so many men of color are becoming to victims to law enforcement.”

University President James W. Wagner told the Emory News Center that Lewis has “exemplified profound understanding of the moral imperative of justice,” according to an April 20 University press release.

“Emory University is deeply honored that the congressman has allowed us to recognize his contributions to American social justice through the naming of this professorship,” Wagner said in the press release. “The John Lewis Professorship will both honor a great American and remind future Emory-educated attorneys of the responsibility bequeathed to them as servants of the law.”

Lewis spoke at Emory’s commencement address in 2014, where Emory also honored him with an Honorary Doctor of Laws degree.