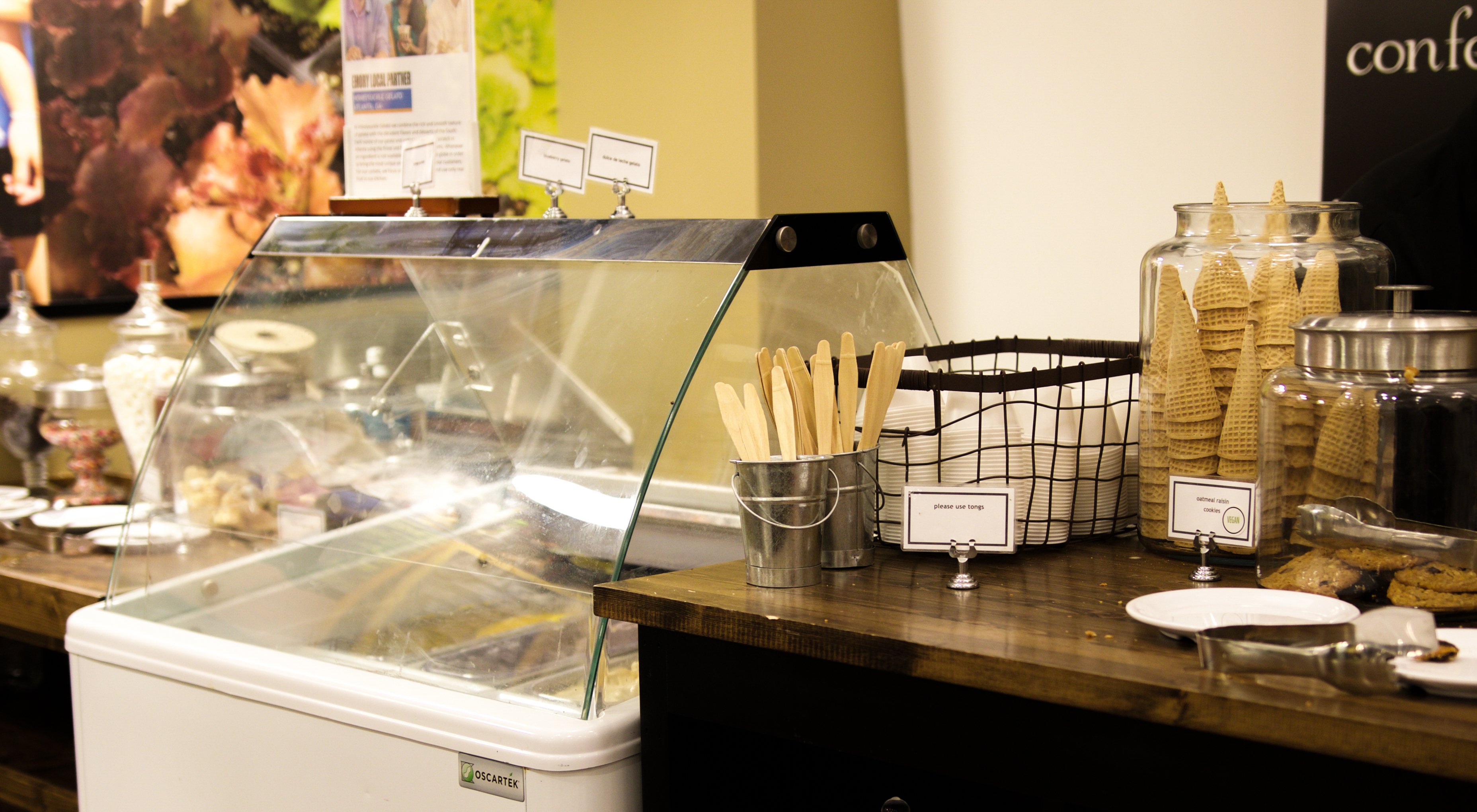 As someone who eagerly anticipated the opening of the DUC-ling, I was curious to see what Bon Appetit had decided to change and what it had decided to keep. While I hoped they would finally take “Lemon Herb Tilapia” off of the menu, many of the changes they made were simply structural. The seating arrangement is now much less akin to an “American Ninja Warrior” course, and they have finally fixed the tray return station so there is no longer a mountain of plates one piece of silverware away from toppling over like a massive Jenga tower. But of all the changes Emory made to the epicenter of campus dining, I was most surprised to find that they had done away with the traditional soft serve machine and instead opted for a higher-end gelato bar.

The soft serve held a special place in the hearts of some DUC-goers, myself included. Although it offered just

two flavors, vanilla and chocolate, it was more than enough to satisfy the frozen dessert cravings only made worse by the lack of ice cream shops at both Emory Village and Emory Point — at least when the machine was not out of order. Whether combining the vanilla with root beer to create a homemade float, or trapping the chocolate between two soft cookies in a truly decadent ice cream sandwich, the ability to “Frankenstein” your own frozen creations compensated for the weaker parts of the DUC (I’m looking at you, DUC pizza).

Unlike the soft serve machine, the flavors at the gelato stand vary from day to day. I sampled the orange sherbet and green tea gelato, both of which are pleasant changes from the two basic flavors previously served in the DUC. Additionally, the gelato has a much heavier, almost crumblier texture than the smooth, creamy soft serve, making it feel marginally fancier. The classic toppings, like rainbow sprinkles, are still at the side of the bar, but they don’t always pair well with such specific flavors.

The gelato itself is an upgrade in both flavor and consistency, but one should note that the portions are much smaller.

Instead of loading up a regular-sized bowl with as much soft serve as possible, you’ll be served a small plastic cup with a single scoop of the flavor of your choosing. While the smaller portions may help your MyFitnessPal calorie count, if you have little willpower like me, you’ll have to wait in line again to be served more.

The gelato stand definitely improves campus dining in some areas, but it also comes with its own set of shortcomings, leaving it at about the same level of satisfaction for some students as the soft serve. Even so, if you’re jonesing for something cold and sweet, the gelato will get the job done.