From the Archives: ‘Shock Treatment’ Electrifies 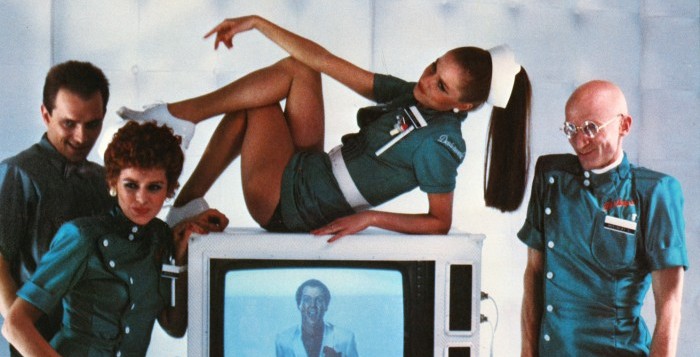 Halloween is the time of year that well-adjusted people dress up and have fun while shut-ins like myself watch the cult classic “The Rocky Horror Picture Show.”

It’s a ritual that fans of the creepy movie-musical look forward to every year. But what are they to do when Halloween night fades into All Hallow’s Day? A little “Shock Treatment” (dir. Jim Sharman) is just what the doctor ordered.

“Shock Treatment” is the 1981 follow-up to “The Rocky Horror Picture Show.” Originally titled “The Brad and Janet Show,” the film faced some serious changes to the script and filming locations when the Screen Actors Guild strike of 1980 forced the entirety of production to an indoor studio.

However, this didn’t stop the movie-musical from completing its mission of crafting a catchy soundtrack paired with some biting satire.

In fact, the indoor studio environment gives it more of a stage play than movie vibe, which makes the viewing experience all the more interesting.

The story unfolds in a TV studio in the happy town of Denton, U.S. Denton residents enthusiastically and naively fill the audience seats nonstop, while station executive Farley Flavors (Cliff De Young) oversees it all.

The straight-laced couple from “Rocky Horror,” Brad Majors (also played by Cliff De Young) and Janet Majors (Jessica Harper), are selected for a marriage game show that decides that Brad must go to an insane asylum (also known as the TV show “Dentonvale,” in this studio) because he’s too boring.

Janet is told that, in order for Brad to be cured, he has to see her become a successful TV personality, and she agrees to try.

From there on out, Brad and Janet find themselves pulled deeper and deeper into the darker side of the sunny Denton studio, trying to find an escape. However, they soon become challenged by the powerful station executive, as well as their own demons.

Little Nell Campbell (Columbia from “Rocky Horror”) plays the McKinley’s assistant Nurse Ansalong who, unfortunately, does not have a tap-dancing solo in this movie.

O’Brien’s performance is nothing short of mesmerizing.

He’s incredibly creepy to watch and sings with full-force energy.

The only weird performance that can give him a run for his money in the creepy department is Barry Humphries’ role as Bert Schnick, the Austrian game show host who proposes to send Brad to Dentonvale. Humphries has a disturbingly happy air about him, and it’s impossible to look away when he’s on screen.

One of the first things that “Rocky Horror” fans will notice is how different Brad and Janet from “Shock Treatment” are from the original Barry Bostwick and Susan Sarandon performances.

“Shock Treatment” Brad has developed a very Rick Moranis-esque nerdiness that has caused Janet to become disenchanted with him. Her growing intolerance for him is entirely understandable.

I wanted to divorce this bumbling Brad too after watching only two minutes of him.
Though to De Young’s credit, he has colorful, distinct singing voices for both Brad and Farley. His over-the-top, cigar-chomping performance as Farley is far more fun to watch, though.

The decision to cast Harper as Janet was a bold move. Her singing voice sounds octaves lower than that of Sarandon, which successfully conveys the maturity of the character. Fans of the original “Rocky Horror” have a tendency to criticize Harper’s performance for this reason, and I can’t say I agree.

Janet couldn’t continue to be the overly-frail damsel in distress that she was in “Rocky Horror.” First of all, she would suffer numerous concussions from all that fainting (considering De Young probably wouldn’t be able to catch her), and more importantly, it wouldn’t be as entertaining to watch.

The 80s are here: all hail the angsty heroine.

The 80s put its fingerprints all over the music: every synth-y, haunting second of it. A few of the more plot-irrelevant songs could have been nixed (a problem with many movie musicals) but these songs are pretty short, so I can’t complain.

Harper’s haunting, robotic performance paired with De Young’s passionate, desperate vocals make for one of the most interesting songs in the movie.

All in all, the songs are memorable, fun 80s fare.

However, there are quite a few issues involving the plot.

Brad and Janet are oddly complacent with the strange situation in Denton. Janet isn’t too hesitant to have Brad institutionalized.

Again, given the fact that he’s acting like Nerdgeek von Poindexter, I can’t blame her, but I would expect a little more attachment to her own husband. Brad shows a little more skepticism than Janet towards the weirdness of the studio, but not enough for him to be the resonant voice of reason.

Another issue is the fact that the world of the Denton TV studio is never explained very well. There is no explanation of why the studio has people basically living in it, why we should feel threatened by the antagonists and how the studio actually operates.

This isn’t too much of an issue once you get into the film, but every now and then there will be a plot point or line that reminds you how confused you are.

“Shock Treatment” doesn’t receive the kind of love it deserves.

It was a major commercial failure upon release (only a midnight Halloween screening), critics panned it, and fans were disappointed by it as a sequel.

Honestly, it stands very well on its own as a film.

Sure, it has a few problems, but that shouldn’t scare you away from watching it. “Shock Treatment” is not better or worse than “The Rocky Horror Picture Show.”

“Shock Treatment” is just the neglected little brother of “Rocky Horror,” and it needs more attention.