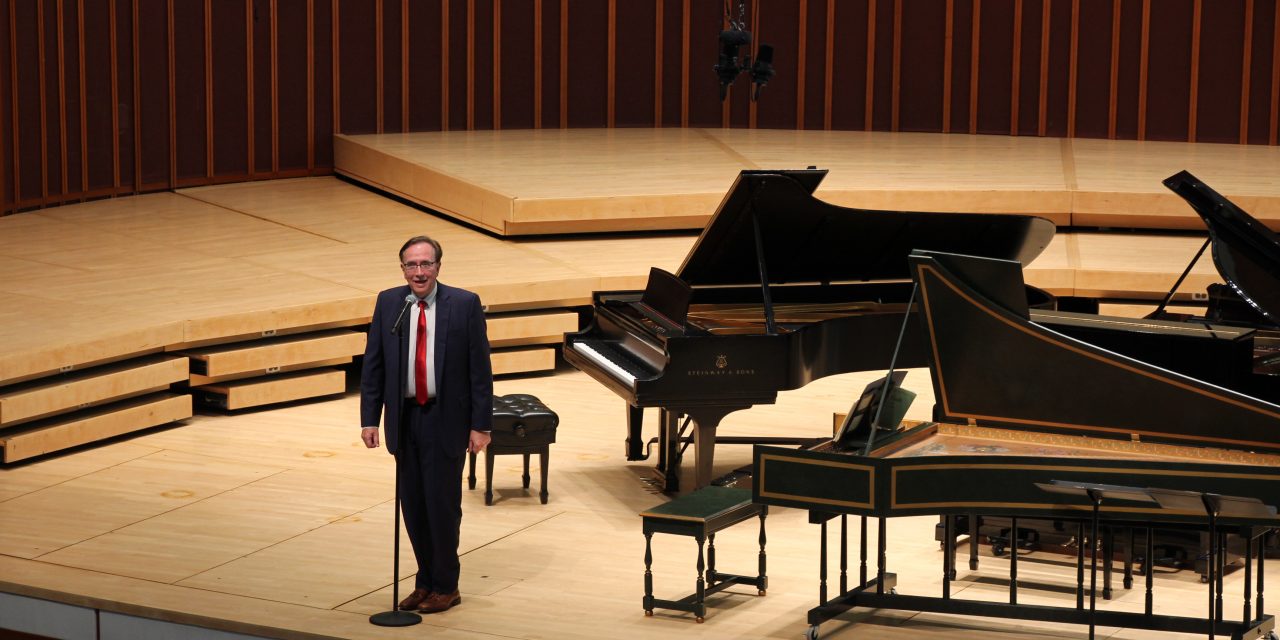 Seeing teachers, professors, deans or principals outside of an educational setting is an unexpected and often disarming surprise for most students of any age. However, Professor of Organ at the Department of Music Timothy Albrecht’s livestream performance of Johann Sebastian Bach’s Well-Tempered Clavier, Book I, on Sept. 27 was quite the opposite. I left the Zoom livestream feeling simultaneously energized and relaxed after having seen Albrecht’s gifted and technically-brilliant display of musical mastery. My reflection on what it means to educate oneself in various realms, whether they be artistic, cultural or professional, was activated and inspired by his performance.

This livestream occurred as a part of a new virtual concert series hosted by the Schwartz Center for Performing Arts, featuring various musicians as they take the center stage while the audience stays in the comfort of their own homes and joins in over Zoom. Each performance comes with a downloadable digital program, making you feel like you have traveled to the Schwartz Center for the show without ever leaving your couch. 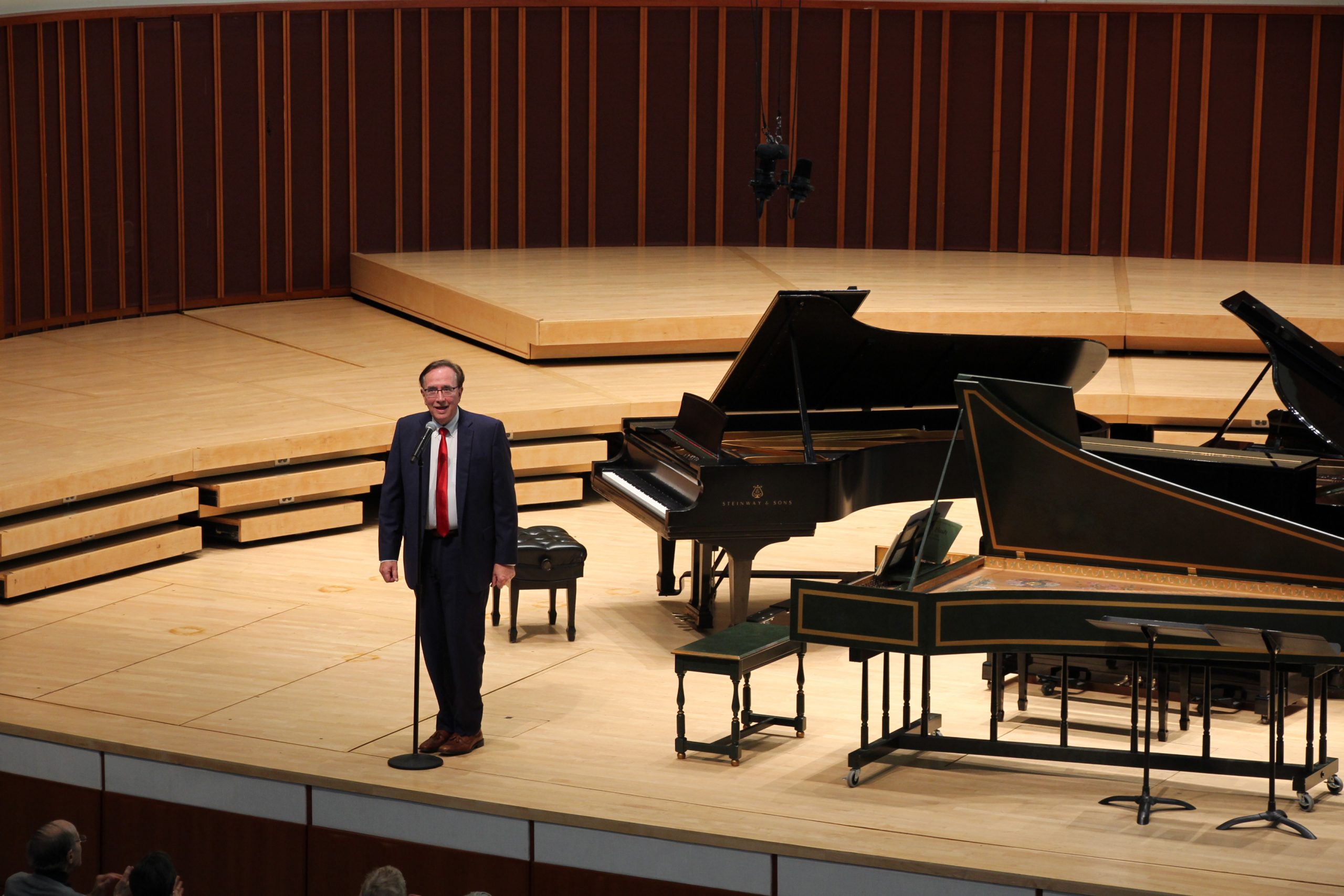 On that rainy evening, I sat in my dorm and watched Albrecht perform the compositions of Bach on five different keyboard varieties. Albrecht played six compositions from Bach’s Well-Tempered Clavier, Book I, on keyboards ranging from the traditional, grand Steinway piano to the John Morley clavichord, a strangely-shaped keyboard the professor had brought from his own home. The Graves Memorial Portative organ used at the concert played resounding tones that echoed throughout the performance hall, reminiscent of a church. The Steinway piano minimized the dramatic musical impact, in comparison to the other keyboards, and Albrecht’s stature appeared smaller and more contained. Ultimately, to play the Wortsman organ, Albrecht had to walk across the performance hall, leaving the audience in anxious anticipation of the last piece, finally arriving at the organ and filling the quiet hall once again with the dramatic tones of Bach, his fingers moving in a flurry across the keys.

The Well-Tempered Clavier features a major and minor piece written on each successive note of the chromatic scale. Before the performance, Albrecht encouraged the audience to imagine each piece as a different one of Bach’s 20 children, each running out onto the stage and bestowing their thoughts, characteristics and personality upon the audience.

Previously, I had not thought to examine musical compositions through such an anthropomorphic lens, but in doing so, I grasped and related to the music beyond what I expected. When Albrecht got to the prelude and fugue in C-sharp major on the Steinway piano, I pictured a child running out onto the stage. They were fast, bold and dramatic; energy rippled beneath the surface of their eyes, only bursting through every once in a while when they flashed a smile. By the time Albrecht moved to the John Morley Clavichord, I saw a different child on stage, one who was bouncy and jaunted over to the audience.

About halfway through the performance, once Albrecht had returned to the Steinway, the child on stage was brooding and thoughtful, asking questions of me that I knew were important, but also dark and intimidating. The performance finale featured prelude and fugue in F minor played on the grandiose Werner Wortsman Memorial organ. The child walked out slowly, but with intent. They may not have seemed happy, but they were at peace and grounded. Their thoughts flowed naturally from one topic to the next. I was left feeling grounded as I looked out the window of my dirty residence hall into the pouring rain.

This livestream ended at 5:30 p.m. EDT, and a mere two and a half hours later, I found myself sitting down for virtual Yom Kippur services. As I sat in services, I reflected upon the compositions of Bach I had heard earlier that day, the children I had met and the ways in which a classical music livestream felt nearly as reflective and all-encompassing as the Jewish prayers felt that evening. There was a commonality despite the dissonance in the religious ideologies of Bach and the Jews, as Lutherans have historically upheld antisemitic beliefs. Professor Emeritus of Music at Swarthmore College (Penn.) Michael Marissen has written and studied anti-Jewish rhetoric in Bach’s compositions, examining Bach’s St. John Passion as a work filled with biblical allusions responsible for spreading anti-Jewish attitudes. Marissen highlights the line, “They will kill you and think they are doing so in service of God.”

I do not blame Bach personally for this antisemitism, as such attitudes ran rampant throughout the Middle Ages, peaking in 17th-century Eastern Europe and forcing most Jewish communities to reside in decrepit, isolated shtetls. Understanding and learning about this historical context is critical, as Marissen explains these classical works should be seen as “an educational opportunity” and be taught as such when performed in concerts. This concept of education, whether it be based on technical musical skill or the historical impacts of anti-semitism in art, is one I feel rings true to the ideology of Albrecht and the Bach performance livestreamed on Sept. 27.

Albrecht is a renowned masterclass teacher of classical organ performance around the world and he encouraged his audience to learn about and engage with the different children that came onto this virtual stage. Take each of these unique, and yet seemingly interconnected, moments of education and enlightenment to further your understanding of art, equality, musical technique, historical oppression, self-reflection and identity. No matter which child you are, bring what you have to the table and take in what you can from others, learning from the differences and the histories around you.