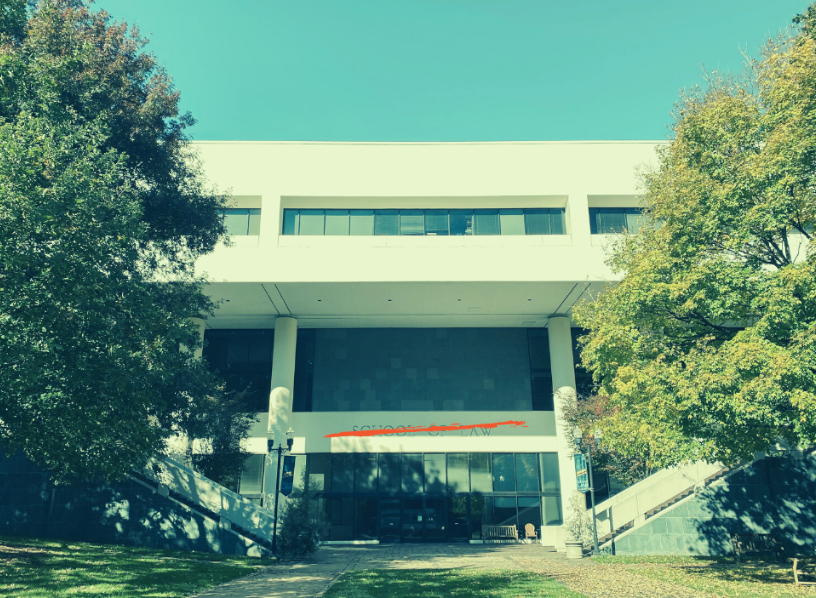 When the Emory Free Speech Forum (EFSF) began to promote their event with the Foundation Against Intolerance and Racism (FAIR) at the Emory University School of Law last month, controversy quickly followed. Within a couple days, EFSF’s fliers about the event — coined “A Pro-Human Approach to Civil Rights” — were met with student-made fliers condemning FAIR.

Students alleged that FAIR, a nonpartisan organization dedicated to advancing civil rights by finding common ground among people on both sides of an issue, is transphobic and against critical race theory (CRT).

One flier asked, “WHY IS AN ORGANIZATION ‘AGAINST INTOLERANCE’ PLATFORMING TRANSPHOBIA?” Another alleged that FAIR “supports intolerance against trans people accessing healthcare.” The third flier claimed that “LGBTQIA+ books are being banned, trans healthcare is being banned and the ‘Foundation Against Intolerance & Racism’ only cares about banning CRT — and they think states have a right to do so.”

EFSF President Michael Reed-Price (24L) supported the fliers against FAIR, as they created an environment where both sides were represented.

“The worst thing we can do is not listen to those people,” Reed-Price said. “Their right to post posters against us is great, but we’re certainly not gonna abstain from bringing someone in just because someone else might find their ideas controversial.”

About 20 students came to listen to FAIR Chief Legal Officer Letitia Kim, FAIR Attorney Leigh-Ann O’Neill and FAIR Legal Analyst Reid Newton discuss the importance of open debate in Gambrell Hall on Oct. 27. When asked about the fliers, O’Neill said that FAIR was not transphobic or against CRT — they are simply proponents of free speech.

Alex Klein (24L), who declined to confirm if they put up the fliers, was among FAIR’s critics. They alleged that FAIR gives a platform to transphobia, noting the organization’s webinar “Understanding Gender Dysphoria and Its Impact on Clinical Care.” FAIR promoted the event in an Oct. 17 tweet, which was featured on an opposing flier.

One of the speakers, physician-scientist Lisa Littman, sparked controversy in 2018 when she coined the term “rapid onset gender dysphoria” to describe a sudden unease among teens and young adults with the sex they are assigned at birth. Her study, which was published in the peer-reviewed scientific journal “Public Library of Science (PLOS) One,” was based on three websites known to foster transphobic discourse, Klein said, expressing discontent toward Littman’s involvement in the webinar.

Following public criticism, PLOS One launched a post-publication investigation on the study’s methodology and analysis. Brown University (R.I.), which employed Littman at the time, deemed that “removing the article from news distribution is the most responsible course of action,” according to an Aug. 28, 2018 statement addressing the study. 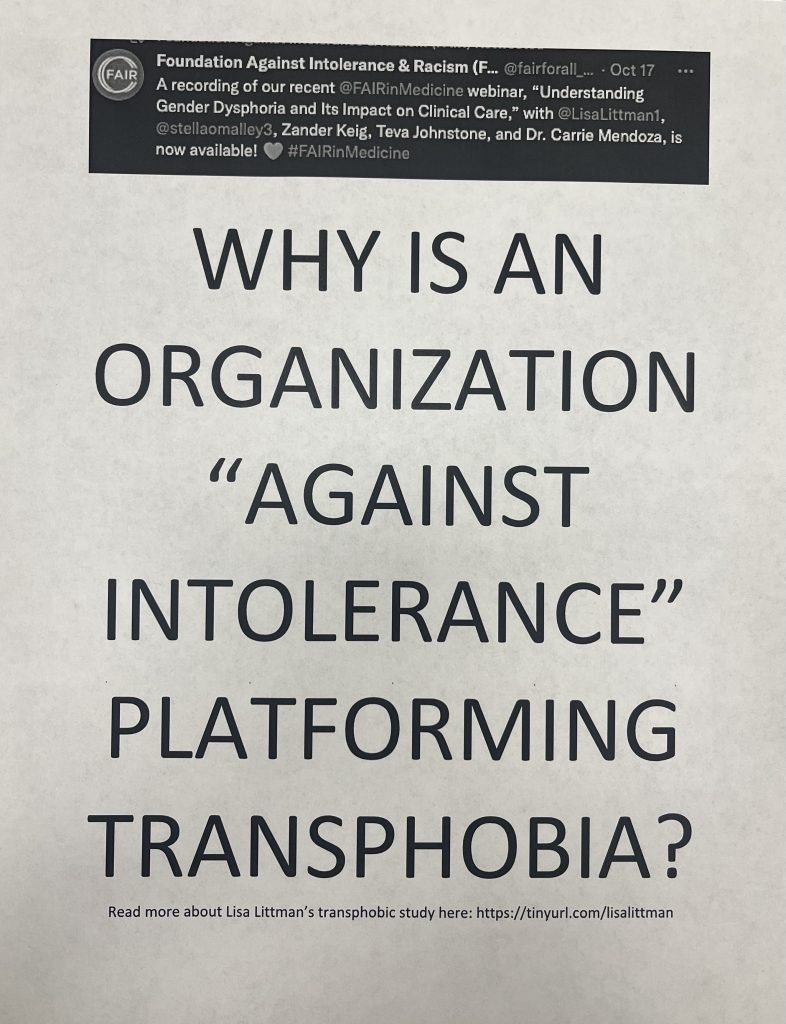 Kim defended Littman, saying she was presenting facts to help transgender youth understand what they may be going through, not claiming their identities are a result of social pressure. But even if she was making that claim, Kim said Littman would have the right to share her opinions if they were backed by evidence — and doing so would not make FAIR transphobic.

On Oct. 20, FAIR retweeted Newton’s post promoting an opinion piece she co-wrote with O’Neill, which became the subject of one of the fliers criticizing FAIR. The article discussed the U.S. Department of Health and Human Services’ proposed Nondiscrimination in Health Programs and Activities Rule to protect individuals’ ability to receive gender-affirming care.

“Medical doctors are among the most highly educated professionals on the planet. Why, then, would the federal government seek to curtail their ability to perform their jobs to the best of their ability?” @LaLONeill and I wrote a piece for @TheHillOpinion: https://t.co/tFKyJQCmVq

Newton and O’Neill argued that because the impacts of gender-transition care are not fully known, healthcare providers may understandably be “hesitant to go along with this new mandate at the potential expense of their patients.”

However, Klein said that the two-sided debate does not hold merit when discussing gender-affirming care and does not excuse Littman’s presence at the webinar or the article.

“What I find really frustrating is that there is this desire to create two sides to an argument, when realistically the sides that you have are ‘treat someone with dignity and respect’ or ‘treat someone as less than human,’” Klein said. 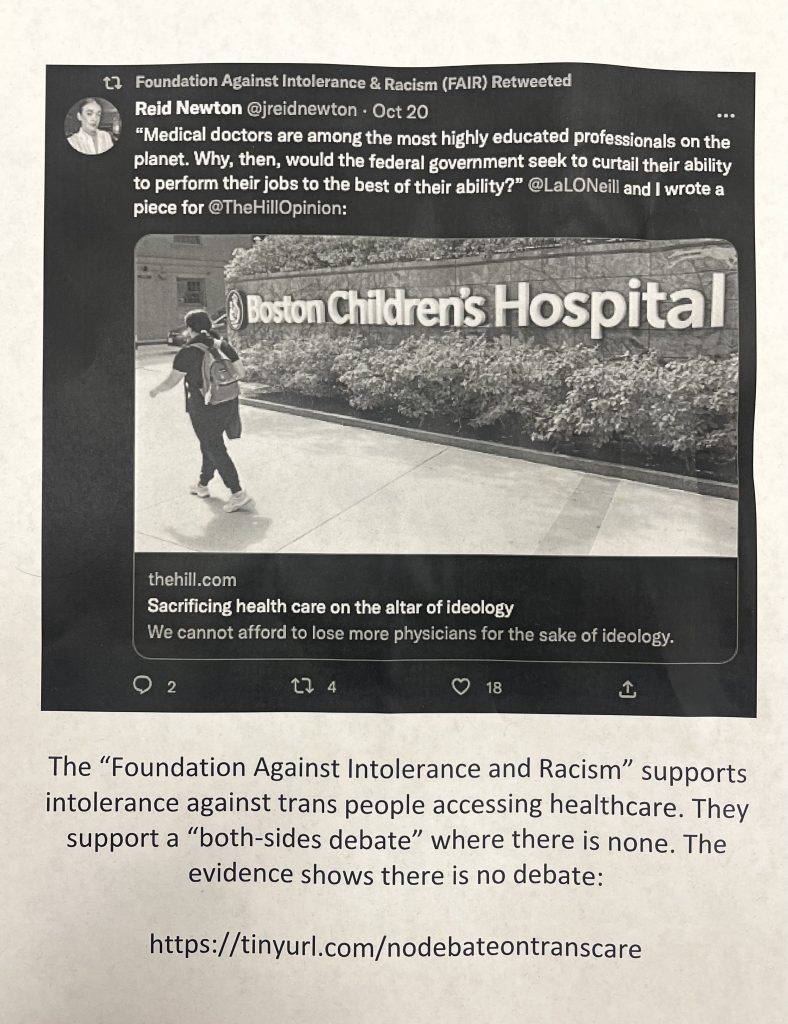 Newton maintained that she and O’Neill are not transphobic, explaining that the article’s goal was to ensure transgender patients know both sides so they can give informed consent.

The last claim made against FAIR was that the organization supports banning CRT, referencing the organization’s July 23, 2021 tweet about an article claiming states have the right to ban CRT, but that doing so would not be effective because teachers could still cover the general ideas. The flier also featured a July 27, 2021 tweet promoting an article stating that CRT — which the author called “nonsense” — should not be banned and students should form their own opinions.

“Both approaches are not really sticking in the spirit of their name of ‘against intolerance of racism,’” Klein said.

“A state can ban CRT, but if it does, kids are still being taught by the same people who thought CRT for kindergartners was a good idea in the first place,” writes @RichardHanania. https://t.co/MicQX89mrd

“Just as we wouldn’t ban teaching students about communism or fascism, our schools should equip students with the intellectual tools to understand any ideology — including CRT — and decide for themselves what they think about it.” 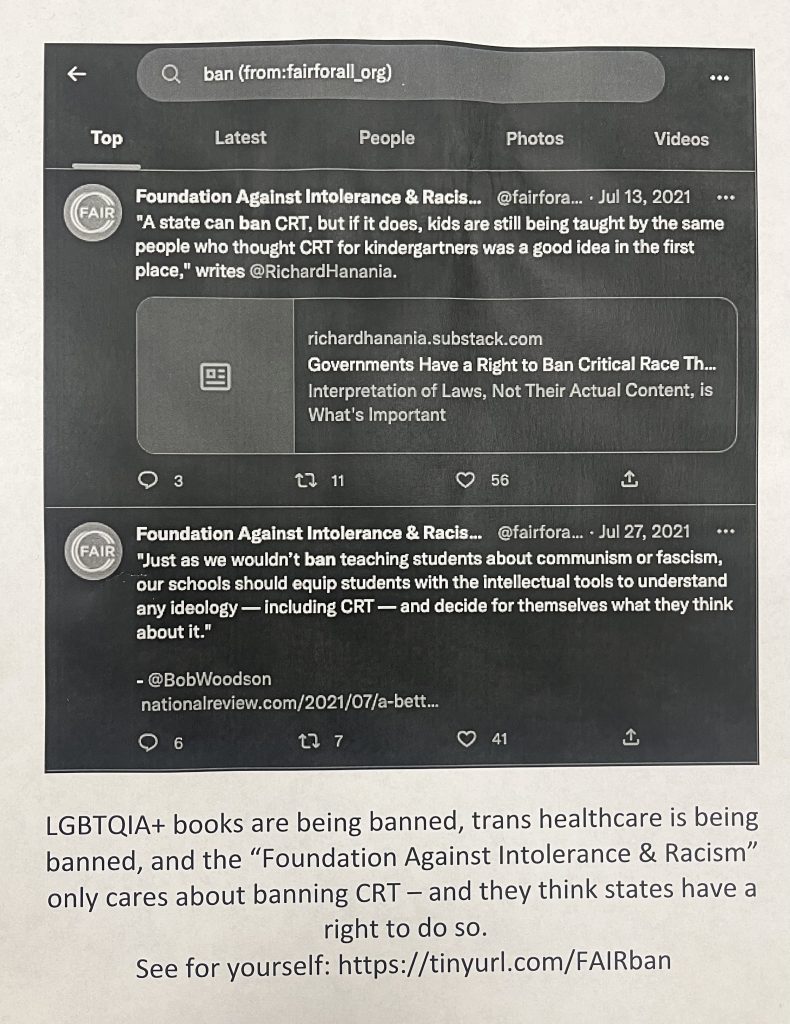 The controversy surrounding FAIR is the most recent flare-up of a years-long debate about free speech that has splintered the law school and garnered national attention. This includes EFSF’s battle against the Student Bar Association (SBA) to get chartered last year.

EFSF had chartering hearings with SBA on Oct. 20, 2021 and Nov. 3, 2021, ultimately voting against the charter request both times because they believed EFSF overlapped with other clubs and were concerned about the lack of moderators to facilitate discussions, according to O’Neill. SBA also said certain debates about identity cannot occur in a safe way.

“It is disingenuous to suggest that certain topics of discussion you considered, such as race and gender, can be pondered and debated in a relaxed atmosphere when these issues directly affect and harm your peers’ lives in demonstrable and quantitative ways,” SBA wrote in a letter to EFSF after their first charter was denied.

Reed-Price and O’Neill disagreed with SBA’s reasoning, noting that EFSF is distinguishable from other groups because it is nonpartisan. They also said that law students should not require a moderator for discussions.

SBA also denied EFSF’s charter under the belief that the forum was majority white and could therefore not hold productive conversations on identity, Reed-Price alleged. 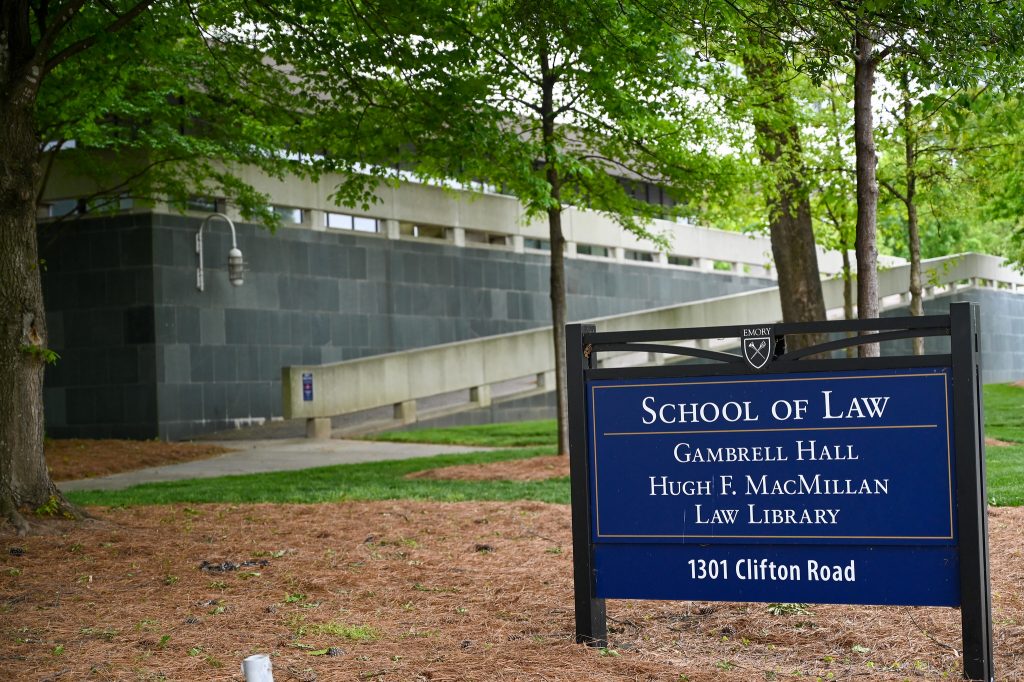 O’Neill disagreed, stating that Emory Free Speech Forum does have members of color.

“Even if it were true that all of the Emory Free Speech Forum members were white, which of course, that’s not the case at all, it would be unthinkable to imagine that a skin color could dictate your thoughts and emotions and ideas about anything,” O’Neill said.

The group ultimately contacted the Foundation for Individual Rights in Education (FIRE) and FAIR. Kim wrote a letter to Taylor on Jan. 18, urging SBA to reverse their decision against chartering EFSF.

With the help of FAIR and FIRE, Reed-Price said SBA granted EFSF’s charter in late March. O’Neill told the Wheel she was “thrilled,” explaining that failing to do so would be “unlawful” discrimination, especially because Emory receives federal funding.

“It’s super, super nice of them to come and super special to have them here and kind of share the mission that we both share of open discourse,” Reed-Price said.

‘A Pro-Human Approach to Civil Rights’

At the beginning of the event, Kim explained that FAIR’s “pro-human approach to civil rights” consists of focusing on common humanity, not trait differences. She cited the experiences of Daryl Davis, a Black man who spent decades befriending members of the Ku Klux Klan (KKK) and ultimately convinced around 200 members to leave the KKK and give him their robes. She called Davis FAIR’s “north star.”

Newton, who is a gay woman from a deeply conservative family in the South, shared her own experiences, saying that although it was hard to find common ground, being honest about her sexuality with her family has been beneficial.

“There’s not one person in my family who wouldn’t come to my wedding,” Newton said. 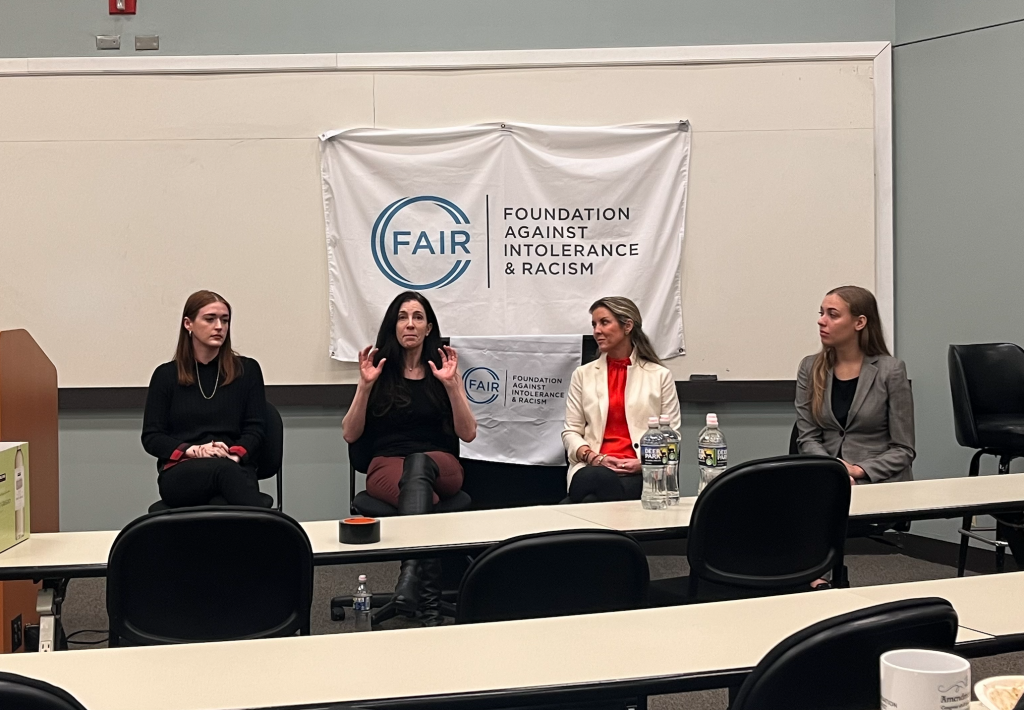 The discussion shifted to focus on the importance of free speech in education, with O’Neill noting that divergent viewpoints are necessary for learning, particularly in legal fields. Both Reed-Price and EFSF Vice President MacKinnon Westraad (24L), who was moderating the event, said that they have seen other students shut down opposing viewpoints during class discussions without professors interfering.

To remedy this, Newton said professors should lead by example, such as by hosting debates with colleagues and getting a beer together afterward. Kim agreed, adding that students who shut down opposing views should not be punished, but should instead engage in a conversation to explain why they are against open discourse.

“But in order to have that conversation, what does it require?” Kim asked. “Open dialogue.”

Kim ended the event by noting that while physical harm is an obvious line that cannot be crossed for the sake of free speech, the line blurs when it comes to mental harm, because at some point, everyone unintentionally harms others.

“The question we have to ask is, ‘Are we willing to preempt free speech rights because of the risk that somewhere down the line, somebody may be upset by it or mentally harmed?” Kim said. “In my opinion, if we go that route, we are going to be shutting off so much essential speech.” 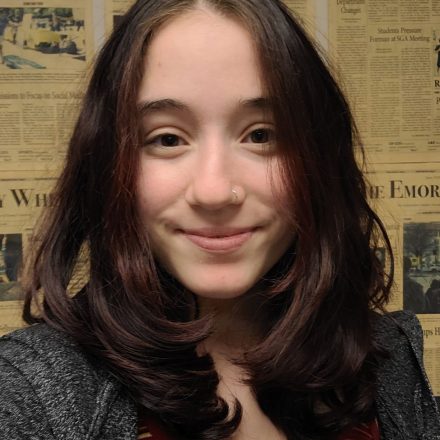