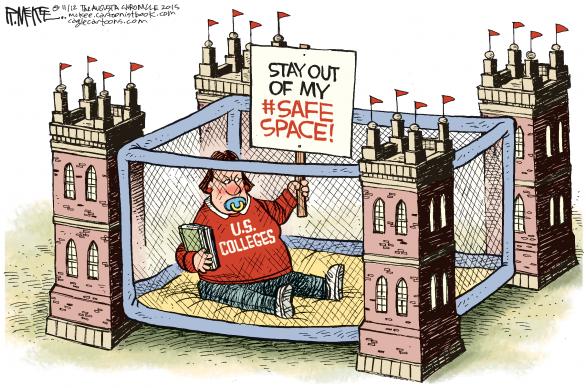 On Jan. 1, 1959, Fulgencio Batista and his supporters fled Cuba. Shortly thereafter, Fidel Castro began his reign in Havana, over time eliminating all hopes of freedom that were promised to those on the island nation. It ushered in a period, regardless of your political views on the situation, in which the United States shunned the nation, as well as the dictatorial and communist values upheld by the country’s leaders and sympathizers, those who actually had a voice.

For that reason, in the early 1960s, my parents and many family members fled Cuba. In America, they sought out what was held from them: the ability to have opportunity and freedom, especially the freedom of speech — a far cry from the extreme views of a communist nation that censors its people. They also knew that with that freedom came both popular and unpopular viewpoints.

On March 21, 2016, individuals chalked on Emory University’s campus; supposedly over 100 instances of “Trump 2016” and slogans of that sort appeared throughout the campus. Shortly thereafter, protesting campus groups registered their disgust for the chalkings, citing “fear” as a just reason to erase the views of those with whom they disagreed. As a result, University President James W. Wagner chose to protect only the speech of the most vocal students and to shun selectively the common practice of university chalking, with those in favor of the censorship now choosing to cite “vandalism” as the rationale under the scrutiny of the national press.

Certainly, Donald Trump has offended numerous groups in this country. If you’re a woman, Hispanic, Muslim or Black, you’ve definitely felt the vitriol of his campaign. The GOP frontrunner has had fights and protests break out at his rallies and needed to cancel a Chicago rally due to threats and violence brought on by potentially discriminatory, yet First Amendment-protected, remarks. The candidate’s contentiousness is not what this dialogue is about.

Unlike both of my parents, I did not have to face the struggles of growing up as an immigrant refugee in the mid-20th century. Even beginning to equate speech against our own value systems to any of the struggles faced by those who face true oppression, including my ancestors, is offensive and discrediting to all minority causes. Injustice and suffering are not synonymous with university life, as I have heard and seen the loudest protestors advocate.

True injustice comes when those with these vocal opinions seek to create boundaries around which all others should operate and express their opinions. As President Barack Obama has stated, our college years must be about creating marketplaces where ideas are presented and can collide freely. The university is a place where people can argue and test each other’s theories, over time learning from what is being said by our whole community, not simply shutting down conversations with each other due to sensitivity over disagreement.

This is a far cry from our own President Wagner’s disparagement of Monday’s chalkings, stating that these drawings have “values regarding diversity and respect that clash with Emory’s own.” Why should Emory protect its students from clashing opinions? What impact will this have once students leave and enter the real world? This is not about problems with conservative or liberal viewpoints, but rather the inability of students to converse and clash intellectually, a situation that only creates polarized opinions.

As many have noted on campus, the most vocal groups have been quick to eliminate and invalidate discourse provided by outsiders. Individuals who vocalized disdain have been quick to take to social media, where those who decide to comment or post with opposing views have been accused of racism, bigotry and being incapable of understanding the other side instead of being allowed the opportunity to debate. If that’s the case, then why not help the opposing parties understand these points of view?

Unpopular speech is still protected speech in America, a law that my family members in Cuba wish they could revel in. Going further, some attempt to discredit this argument by labeling aspects of the chalking a hate crime. This is interesting, because our campus actually did experience such a disgusting act over a year ago, when swastikas were spraypainted (a much more permanent medium) on Alpha Epsilon Pi’s house, one of the historically Jewish fraternities on campus, just hours after Yom Kippur ended. The FBI’s definition of a hate crime is a “criminal offense against a person or property motivated in whole or in part by an offender’s bias against a race, religion, disability, sexual orientation, ethnicity, gender or gender identity.” To equate this instance to the public chalking of a contentious political candidate’s name is humiliating to those who mourn the sufferings of the millions of Jews and others who were ruthlessly tortured, murdered and persecuted during the Holocaust. It’s even more alarming that, throughout the week, these protesting students focused on uncomfortable rhetoric instead of the hateful and disgraceful bombings that resulted in over 300 casualties in Brussels the day after, as if international acts of terror are not more alarming.

One would imagine that campus “safe spaces” would be where such dialogue and openness can be initiated, given that such safety would be brought about by coming to accords with one another and resolving ideological conflicts. Instead, I believe that these environments actually promote groupthink and unite those who seek out a politically correct herd-mentality, sheltered from opposing views. They are environments where individuals can lament the oppressions found in daily life, but not where someone can discuss holding a differing opinion or take practical steps to move forward and tackle their problems. This is not how life operates outside of Emory. Just as Fox News and numerous media outlets, both national and international, have embarrassed Emory, the promotion of closed dialogue is only going to result in a rude awakening for students when they are thrown into the real world.

I don’t want to live in a sheltered environment. I certainly don’t want to experience the limitations on speech that my family sought to escape. I want both the positive and negative sides of freedom for which my family came to this country.

Let us all be clear about one thing: this country was built upon the right to speak freely and to create and maintain meaningful discourse in the hopes of advancing society. Seeking to eliminate dialogue only discredits a cause. If those who claim to be the voice of minorities continue attempting to make their opinions seem as facts and alienating those in the “majority” because of their inability to “relate” to minority struggles, then I, those who have signed this opinion and those who show support in the comments below my article do not want to be part of the progressive minority rights movement on this campus.

Gregory Santos is a Goizueta senior from Miami, Florida