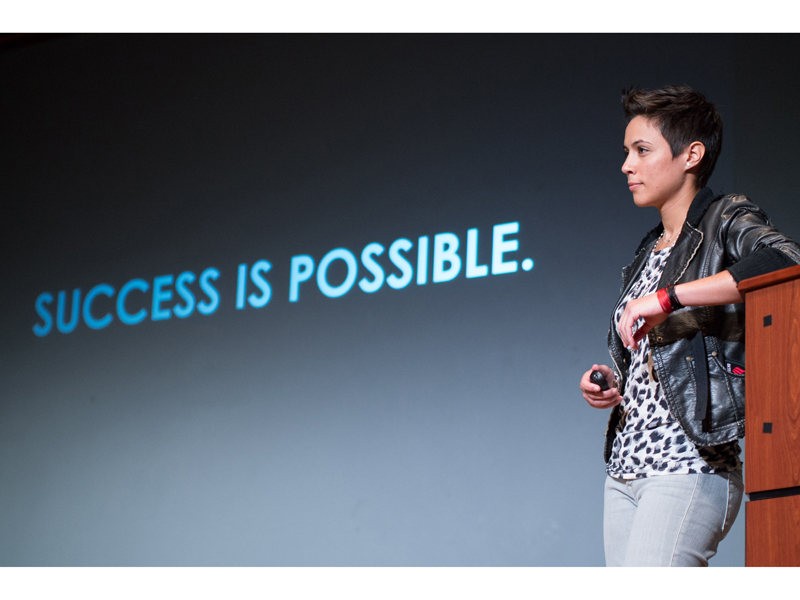 The second annual TEDxEmory Conference was held on Saturday and featured 14 speakers who included professionals from around the world and Emory students. During the event, the speakers gave 18-minute talks regarding ideas within their various fields of interest, which were followed by question-and-answer sessions involving the 500-person audience.

The event took place from 10:30 a.m. to 7 p.m. Saturday April 21 at the Emory School of Medicine. Each session consisted of three back-to-back speakers followed by short breaks for questions for the speakers and discussion amongst the audience.

College senior Jordan Greenwald, Project Manager for Strategic Initiatives in the Office of the Vice President Sarah Vitorino and Candler Theology graduate student Tyler Sit presented throughout the day. The three were chosen through the TEDxEmory Student Speaker competition held in November. The three-stage application process began with an online application that was followed by two rounds of test talks.

“We hope to bring together great ideas and exemplary minds through the speakers to share their vision with Emory students,” said College junior Sreekar Jasthi, a member of TEDxEmory who was involved in marketing for the event. “The speakers give Emory students a platform to expand their learning horizons.”

Founded in 2010, TEDxEmory is a student-run organization that consists of volunteers who help coordinate and plan the TEDxEmory conference each year.

TEDx is an entirely volunteer-organized event that strives to bring innovation and creativity to cities and campuses through speakers and discussion, according to Goizueta Business School Junior Ishaan Jalan. Jalan is also the founder and president of TEDxEmory.

Although TEDx events are independent from the global non-profit organization TED, which stands for Technology, Entertainment and Design, the purpose of the TEDxEmory conference is to replicate TED Talks, conferences held around the world. The motivation behind TED Talks is “Ideas Worth Spreading,” or bringing people together to foster discussion, share ideas and innovate creatively using a free intellectual network, Jalan said.

According to Jalan, the purpose of founding TEDx Emory and creating a TEDx Emory event was to bring the experience to Emory to reduce the financial strain of having to travel across the globe to talks in Edinburgh, Scotland and Long Beach, Calif. for example.

“The goal of TEDx Emory is not to reinvent education but to capture ideas that exist within everyone to better society as a whole,” Jalan said. “By bringing together collaborative, imaginative, ideological people, we create a unique event where people can collaborate and share ideas.”

To choose speakers for the TEDx Emory event, members of TEDxEmory worked together to find experts in various fields who they believed would be good fits for Emory students, Jasthi said. In addition to member suggestions, TEDx Emory also polled Emory students for their opinions on who good speakers would be and compiled a “wish list” of speakers to invite. The speakers attend the conference voluntarily and are not compensated monetarily, he said, though their trips are funded by Emory.

Attendees of TEDxEmory leave the event inspired, Jalan said, especially because of the time
allotted for discussion amongst audience members and with the speakers.

“The event is full of powerful, impacting ideas that inspire the audience,” he said.
College freshman Adam Chan said he specifically enjoyed the presentation of former civil rights activist Bernard Lafayette because of his thoughts on the strength behind not retaliating to violence.

Lafayette also discussed different kinds of love in the world, specifically love that goes beyond the expectation of reciprocity and the idea of racism as a “convenient line of demarcation” that should be fought using discipline.

“He brought up avant garde ideas and explained them in a different dimension that really allowed the audience to think outside the box,” Chan said.

College freshman Cherishma Patel said that Greenwald’s presentation was interesting to her because of a combination of his “artistic” presentation and the content of his speech, how one can create an identity in college.

Next year, Jalan said, TEDxEmory plans to expand the event by booking a larger auditorium space and incorporating more of Emory’s artistic talent into the talks through music, theater and dance performances.

In addition, Jalan said he hopes to advocate for more non-profit student organizations by exposing them to influential Atlanta networks through TEDxEmory.