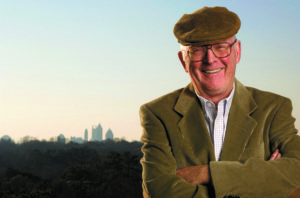 Former Goodrich C. White Professor of American Studies Dana F. White died early Thanksgiving morning after sustaining injuries that were consistent with being hit by an automobile the previous day, according to Tim Crimmins, professor of history at Georgia State University (GSU) and longtime friend of White. He was 82 years old.

In 2011, he retired from teaching and became the consultant curator at Emory’s Stuart A. Rose Manuscript, Archives and Rare Book Library, where he worked on various exhibits, including exhibits on boxer Joe Louis and baseball player Hank Aaron.

Outside the classroom, White was involved in influential media projects. Most notably, he co-created and narrated the award-winning eight-part documentary series on the history of Atlanta, The Making of Modern Atlanta, in 1991. White also served as a project consultant for multiple television and radio documentary series about Atlanta.

Prior to coming to Emory, White worked as a fellow for one year at the Smithsonian Institution in Washington, D.C., and served in the United States Army between the Korean War and the Vietnam War as a West Point teacher.

Interim Dean of Emory College of Arts and Sciences Michael A. Elliott remembers him as having a tremendous impact on campus.

“[White] was a remarkable scholar of the history of cities, particularly Atlanta, and he was a mentor to generations of students and faculty,” Elliott wrote in a statement to the Wheel. “I think that everyone who knew him felt a deep sense of connection. His profound intelligence was joined to a sense of warmth, and so his intellectual excitement was contagious.”

Rosemary Magee, Rose Library director and a former Ph.D. student of White, remembers his dedication throughout his career to uniting students from different backgrounds.

“In no time, he began to be known as someone who brought people together from surrounding universities such as Georgia Tech, Morehouse and Spelman to Emory and vice versa,” Magee said.

Those who worked with White remembered his knack for teaching through storytelling.

Crimmins, who co-instructed urban history classes at GSU with White, said that his colleague was “a wonderful storyteller.” The two collaborated on several initiatives including “The Problem of the Color Line” project, a workshop series that educates Atlanta K-12 teachers about the city’s civil rights history.

“[White] used stories with humor to make points,” Crimmins said. “He was just a delightful colleague to work with.”

Goodrich C. White Professor of Film and Media Studies Matthew Bernstein, who co-taught with White “Baseball in America” in the American Studies department, noted White’s dedication to his students.

“He was interested in his students personally and he was always very sympathetic [to them] … he delighted in students who took the material and ran with it,” Bernstein said. “I remember him as someone who is imbued with the joy of living, a joy of being part of a community devoted to learning.”

Curator of Modern Political and Historical Collections at the Rose Library Randy Gue, a former graduate student in Emory’s Film and Media Studies Department, echoed that White left an impact on Emory and its students.

“White gave me my life’s calling,” Gue said. “Studying Atlanta is my passion. It is what I love to do. Without Dana White, I would’ve never found that.”

White’s papers, journals and audiovisual material are housed at the Rose Library. White is survived by Patricia, his wife of 25 years.