For the Love of Culture 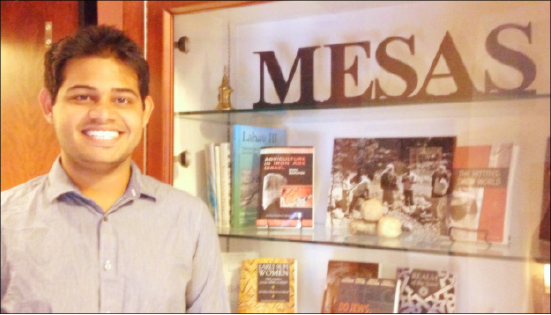 College senior Naveed Hada shares his experience as one of the co-presidents of the Student Association of Middle Eastern Studies (AMES). | Photo Courtesy of Ricardo Pagulayan

Ricardo Pagulayan: Let’s start with a quick introduction. Tell us about yourself.

Naveed Hada: My name is Naveed Hada, and I’m a College senior. I’m just trying to navigate through this year in the best way possible, keeping up with my academics and my extracurricular activities but also keeping the near and not-so-near future in good perspective.

RP: Awesome! So, in keeping things in perspective, which of those aspects of your year are you most excited about or dedicated to?

NH: Actually, I have to say that I am equally dedicated to all of them. Of course, I’m quite excited about what lies ahead as I am reaching the end of my Emory journey.

But I’m also particularly excited about my extracurricular activities this year because I’m a co-president of the Student Association of Middle Eastern Studies at Emory, also known as AMES.

RP: AMES? Is that a new group on campus? Can you tell us a little bit more about it?

NH: Of course! AMES is a relatively new group on campus and has its origins from the various class activities that functioned in conjunction to classes in the Middle Eastern and South Asian Studies (MESAS) department.

For example, the Arabic classes emphasize the Arabic Table, which is basically an out of the classroom gathering of students of the Arabic language, and in [these] get-togethers they have the opportunity to listen to Arabic music, watch Arabic movies, try out Middle Eastern treats and more importantly, use their Arabic language skills in the context of culture and daily life.

This year, there’s also Model Arab League, which aims to train participants in diplomacy and public speaking in the context of Near Eastern politics and culture. AMES is essentially the “mother organization,” and Model Arab League or Arabic Table are activities within our new group. It’s through AMES that they’re planned, coordinated and budgeted.

These activities are, more or less, outlets of what AMES aims to achieve, which is to increase awareness of Middle Eastern and North African culture and politics!

That’s the beauty of the group: you can be part of a particular interest within AMES while being part of a larger, general interest in [the] region at hand.

RP: Does AMES also have publications or a method of circulating information about the group and its interests around campus?

NH: Yes, there will be. What AMES is working on right now is the creation of [a] biannually published magazine that will feature topics ranging from news and politics to classical and contemporary Near Eastern poetry and literature, and even pop culture. In the magazine, we don’t want to merely report on the Middle East as much as we want it to have a human element, [a] human touch. The magazine is open to anyone who feels like they have something to contribute and we will be inviting contributing writers very soon!

RP: AMES seems to be an intricate and complex group given its mission. As a co-president, do you encounter any difficulties in managing group events, outreach or the group as a whole?

NH: Well, definitely, as a new group one of the hardest things to do is getting the word out there. This is why I am so honored that the Wheel is taking such an interest in it, because it’s a rare opportunity to spread the word on AMES and what the group is all about.

In terms of logistics, there’s the issue of budgets, publicity, event planning and basic housekeeping that all student groups on campus have to worry about. I, as one person, can’t tackle all [of those] on my own efficiently.

But, I’m beyond thankful that AMES could put together an executive team that’s meticulous in carrying out its duties and really proactive in putting together an engaging student group.

Of course, coming up with new ideas or figuring out costs isn’t always straight forward, but it’s easy in that AMES members work together to get the job done.

RP: What are your ambitions for AMES? In other words, how do you hope to see the group develop under your co-presidency and even after you have left Emory? What does AMES offer to its members?

NH: I want AMES to build a lasting impression, and I want it to endure long after my time at Emory comes to a close. My vision, in fact, the vision of the entire AMES executive team is to create a forum and a community that broods cultural enrichment and sociopolitical awareness.

Notice how I said “forum.” This is because we don’t want to preach open mindedness, but instead we want to create an engaging environment where members can grow ideologically and intellectually from working with one another and exploring different cultures together.

I want AMES to be the human connection to what you read in textbooks or see on the news. It’s not real to you until you’ve met someone from that region or even tasted food from that region. And this is precisely what AMES can offer to its members: the human element.

RP: What have you gained from your experience with AMES? What are your feelings concerning it?

NH: The first thing that comes to mind is inspiration. I’ve been inspired to share my passion for the Near East and AMES has acted as the vehicle for me to do so. I guess I can walk away with just the sheer satisfaction that I’ve helped to establish a cultural resource for the better understanding of our community for this particular region.