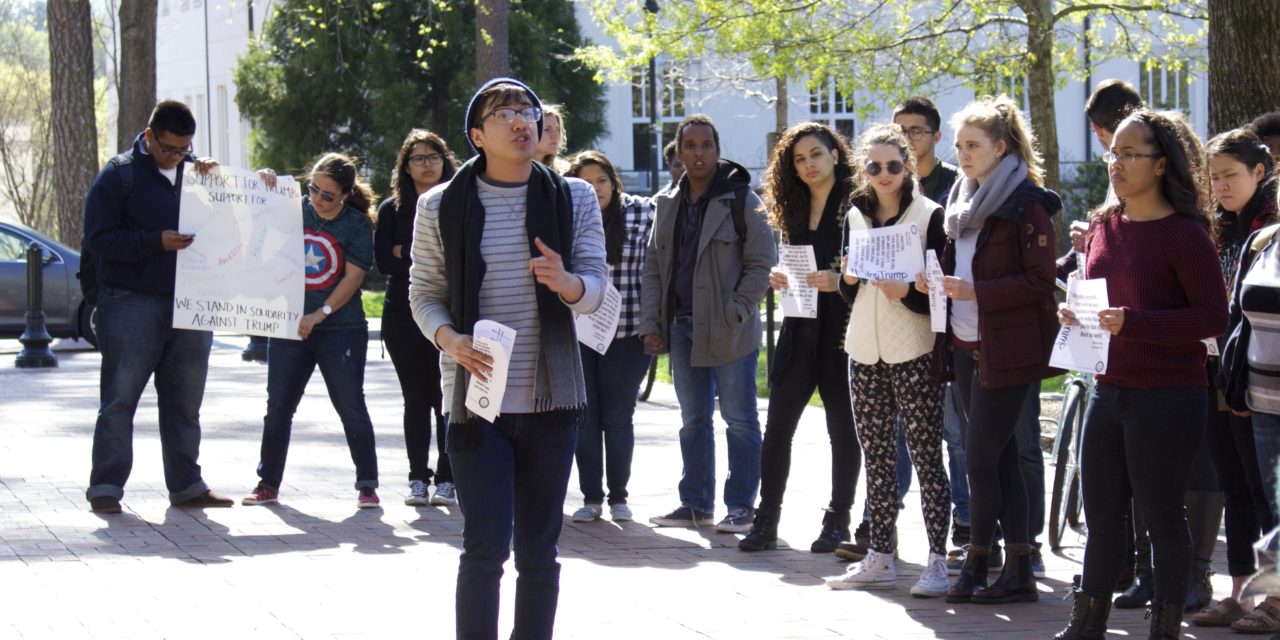 A conservative student’s phone was ripped out of his hand and thrown to the ground, damaged beyond repair. Pro-Trump chalkings were drawn in every conceivable corner around campus, from the steps leading up to the old Dobbs University Center to the sides of White Hall. A life-size Trump cut-out appeared at the College Republicans’ Wonderful Wednesday table and many students attempted to tear off its head.

Leading up to the 2016 presidential election, the Emory community confronted tremendous political upheaval. Liberals and conservatives alike took a combative approach against opposing views, according to Christian Zimm (15Ox, 17C, 20B, 20L), president of Emory College Republicans during the 2016 election.

While flares of political strain occurred during the 2020 election cycle, such as pro-Trump chalkings on the Oxford campus, physical altercations and demonstrations were limited. With most students living off campus, hostility turned into activism, particularly focusing on voter mobilization.

Political Climate and Voter Engagement Prior to 2020

Before the 2016 presidential election, voter engagement among Emory students was negligible.

Ahead of the 2012 presidential election, 72.7% of Emory students had registered to vote, according to the National Study of Learning, Voting, and Engagement (NSLVE). However, Emory’s voter turnout rate was only 40.6%, below the average voter college turnout rate of 46.9%.

Both registration and voter turnout rates increased among Emory students during the 2016 election. In 2016, 75.1% of Emory students were registered to vote and 47.4% actually voted, though the 2016 rate was still 3% below turnout at other universities.

“There was a lot of excitement for Trump because he talked just like every other person and said it how it was,” Zimm said. “He’s a once in a generation type of a candidate, so a lot of the excitement was for people to get out there and vote for him.”

“We didn’t specifically focus on the voter registration and information aspect of elections, but what we did was hold events,” Zimm recounted. “We had a big Trump rally at Georgia State University where we had Milo Yiannopoulos come as our main speaker.”

Unlike College Republicans, Palmer said Young Democrats focused heavily on voter engagement because students felt that the Democratic nominee Hillary Clinton had a chance to win Georgia. He noted the club registered over 1,000 students — more than twice as many students as in previous years.

Despite high voter engagement in the 2016 election, Palmer said that previous midterm elections posed even greater challenges, saying, “it was not so common for students to be actively engaged prior to 2016.”

During the 2014 midterm elections, NSLVE reported that Emory voter turnout was 17.9%, slightly below the national average among universities of 19.1%.

These rates increased dramatically — nearly 23.2 percentage points — ahead of the 2018 midterms. That year, 76.4% of students registered to vote, Emory’s highest registration rate since 2012, and voter turnout was at 41.1%.

Alex Chanen (21B), the current president of Young Democrats of Emory, reasoned that Georgia’s high-profile gubernatorial race between Democrat Stacey Abrams and Republican Brian Kemp was the reason for this increase.

“Since my arrival to Emory in 2016, it was clear that Emory’s campus is one where people really want to be involved,” said Assistant Professor of Political Science Alex Bolton, who is a steering committee member of EVI. “We wanted to make sure there was some organization that had institutional memory and that would be there between elections to help keep that momentum going.”

The political interest surrounding the 2016 election induced tension between conservatives and liberals on campus. Zimm said it was difficult being a conservative on campus because he believes Emory is overwhelmingly liberal.

Zimm feels that professors made being conservative more difficult, recalling moments when they would rant about Trump in class.

Palmer noted complications with being liberal on campus as well. He said many students experienced immense levels of anxiety in 2016 because they considered Trump to be an existential threat.

“Some group of students took it upon themselves to write a lot of pro-Trump messages in chalk on every possible surface so anybody walking to class would have seen it hundreds of times,” Palmer explained. “It was a bit shocking since there is sort of an assumption that people on campus were all against the sense of xenophobia that Trump was touting.” 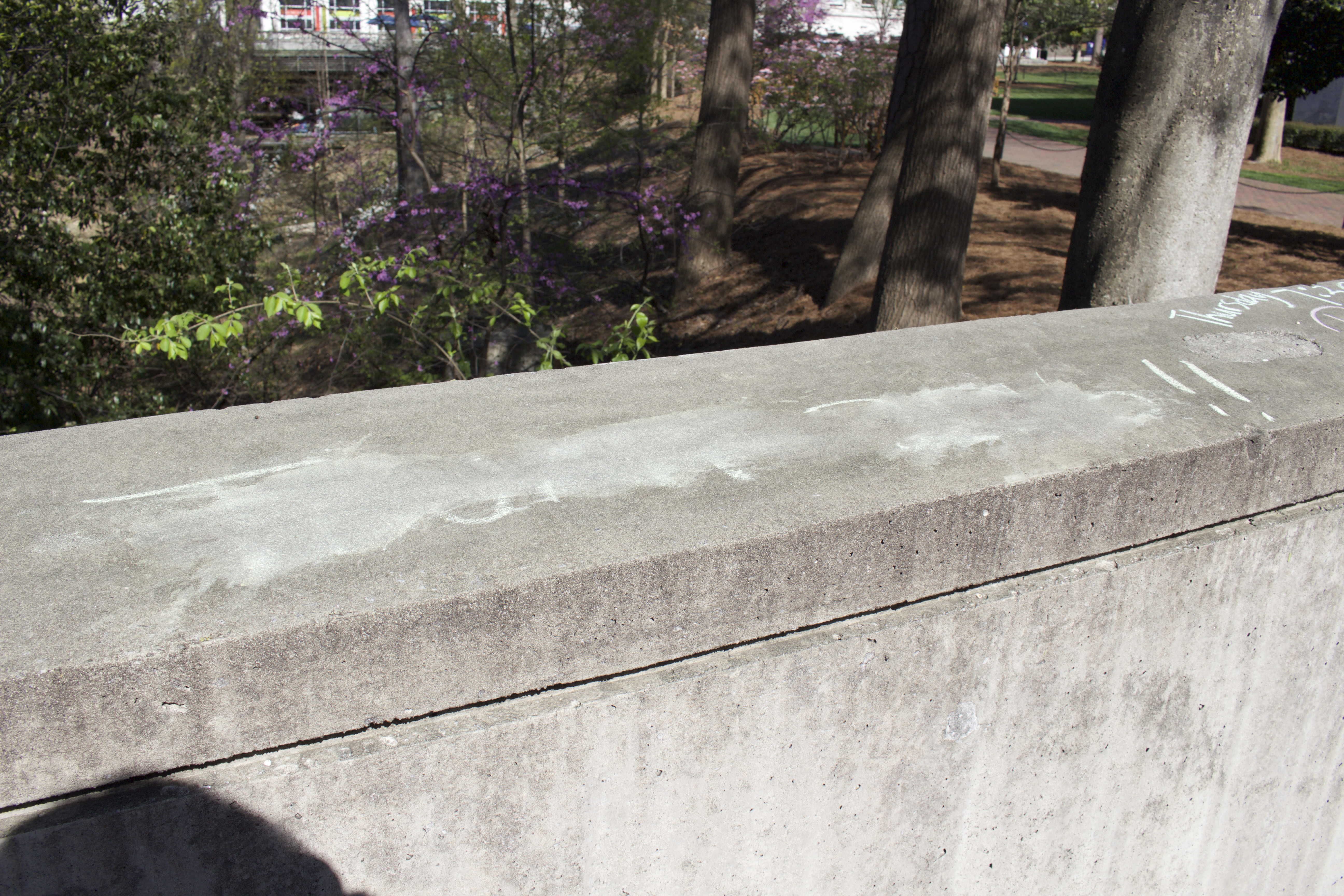 Pro-Trump chalking in 2016 rubbed away. (Courtesy of Julia Munslow)

Both Palmer and Zimm expressed disappointment with how administrators handled rising tensions on campus.

Palmer said students tried to wash away the chalkings, and many were angered by administrators’ lack of support for those who felt threatened.

Zimm, on the other hand, believed conservative voices were being suppressed. He said he sought out administrators for assistance, but they were not of much help.

“We would schedule an event, and we would advertise it around campus, and then we would see that all of our fliers were ripped off or they were vandalized,” Zimm said. “We told the administration about it, and they said it was against the codes, but we didn’t really see any progress.”

Under Zimm’s presidency, College Republicans embraced a strong pro-Trump rhetoric, did not entertain serious discussions with non-Trump supporters and instead engaged in Twitter feuds.

Ariana Gassel (22C), who re-established College Republicans in fall 2018, attributed the club’s demise to their pro-Trump sentiment and secession from the Georgia Association of College Republicans (GACR) after GACR refused to redact an anti-Trump statement.

However, these efforts fought an uphill battle, he said, as students were “battling … Zoom fatigue and people not wanting to log into their computers for another two hours at night.”

Young Democrats of Emory turned to individually registering their peers to vote and arranged for each residence hall to have voter registration forms. He believed these efforts were successful, noting that during the fall semester, Young Democrats and Fair Fight registered over 530 voters.

While EVI and Young Democrats remodeled their plans to fit within COVID-19 parameters, Jasmine Jaffe (22C), current president of Emory College Republicans, said it was not in the club’s best interest to make similar efforts.

“We didn’t really focus on the presidential election in the general election,” Jaffe previously told the Wheel in a Dec. 1 interview. “College Republicans on this campus is already divisive as is and adding Trump to that mix would just make things so much worse, so we’re just going to bring conservative values to campus.”

Similar to Palmer’s experience in 2016, Chanen noted that liberals were motivated to vote this year because of the possibility that Georgia would flip blue.

Although the lack of in-person campus activities helped subdue the polarization between liberals and conservatives on campus, tension still exists. Jaffe told the Wheel she was “not super comfortable” collaborating with Young Dems or Fair Fight in their registration efforts, calling the groups “very partisan.”

In response to Jaffe making similar claims in a previous Wheel article, Chanen and Fair Fight President Alexis Greenblatt (21C) wrote a letter to the editor denouncing her statement.

“The voter registration application doesn’t require any party affiliations, nor do we ask students to disclose their political leanings as we help them register,” Chanen and Greenblatt wrote.

Bolton explained that because EVI is a nonpartisan campus organization, its new 2020 initiatives further motivated students to become politically engaged, emphasized in a PACE class on civic engagement.

Additionally, Bolton noted that this year’s election cycle was the first time Emory used TurboVote, a website that provides a step-by-step guide to voting, and students were very receptive to the platform. He said 3,914 Emory community members registered using TurboVote, 2,066 of whom indicated they wanted help registering.

Ahead of the Georgia Runoffs

The election cycle did not end on Nov. 3 for Georgia residents. Since no candidate in either of Georgia’s U.S. Senate races received more than 50% of the vote in the general election, two Jan. 5 runoffs will determine control of the Senate.

While College Republicans did not focus heavily on the presidential election, Jaffe said they are ramping up their efforts ahead of the Senate runoffs by getting involved in the runoffs via the GACR.

“They’ve been doing a lot of social media outreach and also get out the vote initiatives …  so we’re part of that initiative as well,” Jaffe said.

She also noted that the College Republicans National Committee will subsidize lodging and transportation expenses for adult volunteers who want to canvass in Georgia.

Similar to GACR’s initiatives, Chanen said Young Democrats is using social media to ensure people vote by Jan. 5. However, Chanen explained that Young Democrats had to traverse more obstacles than usual in the registration process, calling Secretary of State Brad Raffensperger an “architect of voter suppression.”

Ultimately, Bolton said it is important that Emory students are already politically engaged, and EVI was created  to further cultivate these interests.

“Our campus is one where people care and want to participate in the election process,” Bolton said. “EVI is just here to help amplify Emory’s civic engagement the best we can.”