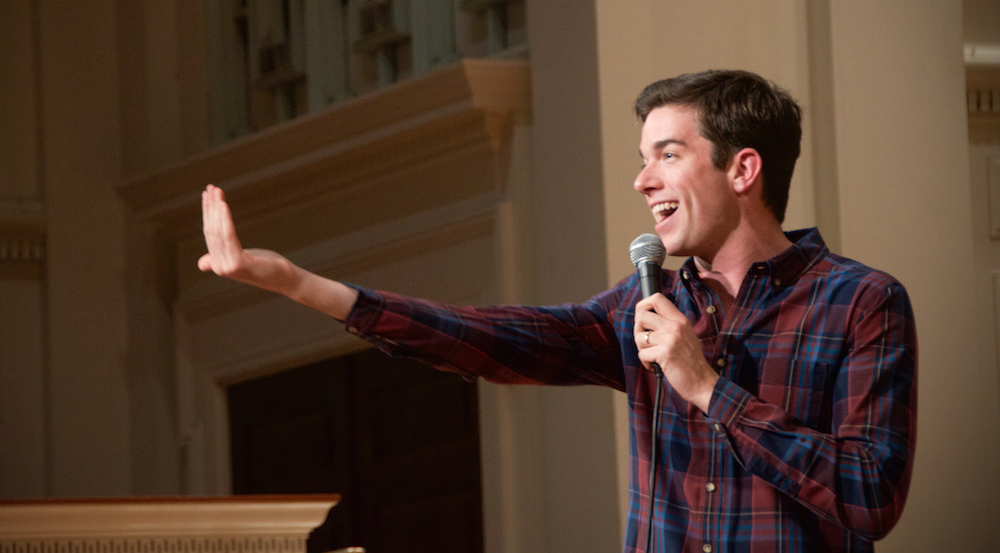 John Mulaney is, in my humble opinion, one of the greatest comedians of our time. And though he broke my heart by taking a major dump on the Wheel last Thursday in Glenn Memorial (“Why is it called the Wheel? I don’t know if you just saw it, but a hundred people just went *shrug*”), I’m a big enough person to forgive and forget. However, as “one of the greatest comedians of our time,” Mulaney has a much deeper comedy bench than the paltry tricks he performs for us college students.

As a self-proclaimed comedy hipster who annoyingly told multiple friends she “liked Mulaney before he came to Emory,” I have, from the kindness of my heart, provided a list of Mulaney’s “greatest hits” — mostly to help new fans discover more of Mulaney’s phenomenal work, but also to prove that I liked him first.

“New In Town,” via Netflix:

Watch Mulaney’s full stand up special from 2012, “New In Town,” via Netflix, or watch clips on Youtube and Comedy Central. Highlights include a detailed breakdown of Ice T’s role on “Law and Order: Special Victims Unit,” the advantage of having a Jewish girlfriend and the innate joy of sitting around and doing nothing. Biggest perk: watching the special in the comfort of your own bed instead of in a sweaty, unventilated church.

“The Top Part,” via Spotify:

You can listen to Mulaney’s full stand up special from 2009, “The Top Part,” via Spotify. It’s the perfect background to any mindless task — cleaning your room, ignoring your roommate, pretending to do work in the library.

“Oh, Hello,” series from the “Kroll Show,” via YouTube:

If there’s only one thing you watch from this list, make it the “Oh, Hello — Too Much Tuna” skit from Nick Kroll’s “Kroll Show.” Mulaney and Kroll play two elderly New Yorkers — George St. Geegland and Gil Faison — with a prank show on public access television. On their prank show, they surprise their guests by giving them “too much tuna.” And that’s it. It’s a devious, ridiculous and hilarious set of sketches that raises the stakes every time a new plate of tuna is delivered.

“Stefon” from “Saturday Night Live” (SNL), via YouTube or NBC.com:

If you want more Mulaney but there’s nowhere to turn, consider adding a John Mulaney station to your Pandora list. You’ll get to hear classics from “New In Town” and “The Top Part” while also discovering hilarious comedians like Kumail Nanjiani, Chad Daniels, Hannibal Buress, Pete Holmes, Patton Oswalt and more. People might wonder why you’re walking around campus with a smirk on your face, but that’s O.K., it’s none of their damn business anyways.

Jenna Kingsley is a Goizueta Business School junior concentrating in Marketing and double-majoring in English/Creative Writing. She joined the Wheel's editorial board her freshman year, and has served as Student Life Editor and Social Media Editor. Her favorite things include Battlestar Galactica, fast food, cats, Medieval literature and Chapstick. She dearly loves a laugh.