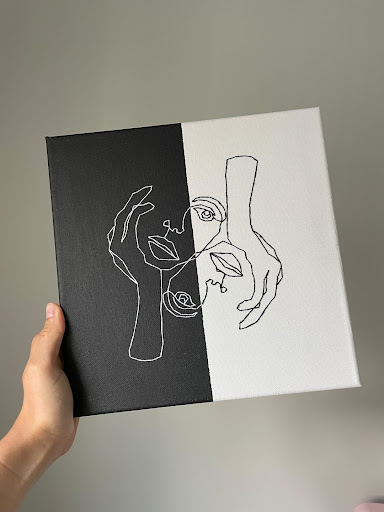 Delaney Fischer (25C) embroiders canvases with color, shape and line. She describes her art as “minimalist,” a three-dimensional medium meant to be touched.

Fischer started her art business Art By Delaney in June 2019 when a local coffee shop in Rochester, New York offered to display her art for sale.

After Fischer’s initial exposure, her business grew quickly. She started an Instagram account and a website, and by that summer, she had already booked festivals. During her senior year of high school, she began to take commissions. As her business expanded, Fischer decided to donate one-third of her profits to charities.

“I already had two jobs at the time, so I didn’t need the money,” she said. “I switch up the charity as much as I can.”

Art By Delaney has donated to organizations such as The Trevor Project, the Alliance for the Great Lakes and Ocean Conservancy. If there are specific charities or events that her customers want to donate to, Fischer respects those requests. 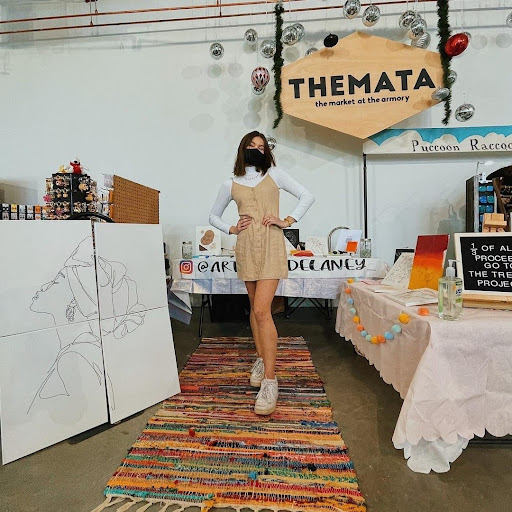 As a college student, she now relies primarily on online orders.

“It’s been hard to make the transition from being able to sell in stores and coffee shops to moving almost exclusively online,” Fischer said.

However, even with the limitations of an online platform, Fischer continues to sell her art. Despite limited on-campus storage space for her art, she keeps her art supplies in her dorm, so she can continue creating.

“It’s a great stress reliever to finish all my work, so I can make sure I have time to relax and express myself creatively,” she said. “I feel like being a college student, you can get sucked up into getting good grades and learning and absorbing without putting anything out creatively.”

Fischer’s art is striking, all stark lines and bold color. She said her process starts with drawing inspiration from the size and shape of the canvas, reference images or vibrant paint. 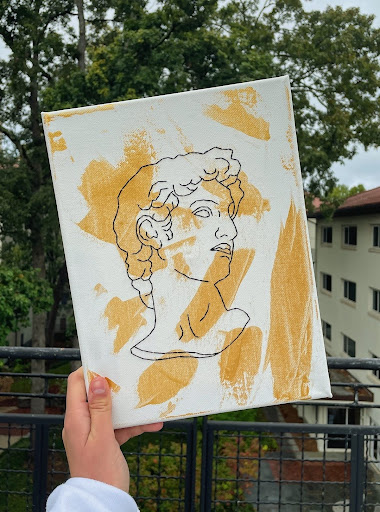 Fischer sells her best pieces online and at flea markets and donates one-third of proceeds to charity.

“Once I have something in mind, I’ll paint, and then I sketch out the design,” Fischer said. “I poke the holes for the thread to go through, and I literally just sit there and I sew that canvas.”

The process is time-consuming. Some pieces take a few hours to create; others have taken weeks. Fischer said one of her favorite pieces was inspired by her girlfriend, and when she posted a photo of the piece on her Snapchat story, she was overwhelmed by the responses she received.

“I had a bunch of people being like, ‘I want this. This is so cool,’” she said. “That piece really gave me the confidence to feel like my art was good enough to sell.”

Fischer was later asked to recreate the same design for a window display at a popular local store.

“It was over, like, four 18 by 20 canvases, so this thing is massive,” she said. “Imagine a store window, and it’s one design going over all these canvases.”

Fischer said the piece “started it all” for her.

“I got to take [my girlfriend] to go see it, and I was like, ‘I am in this window because you inspired me,’” she said.

Rochester Shops Local, an Instagram blog about small businesses in Rochester, describes Fischer as “beyond talented,” “a bright light” and “generous.”

When creating commissions, Fischer wants her customers to be able to “feel themselves through [her] work.”

She said her favorite aspect of her work is the tangible nature of her designs.

“I don’t want my art to just be seen,” Fischer said. “I want people to touch it. I invite them to … experience it.” 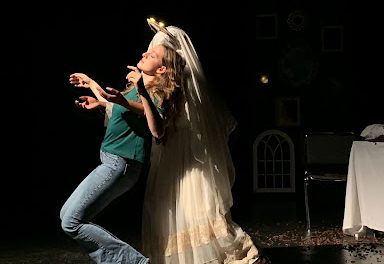