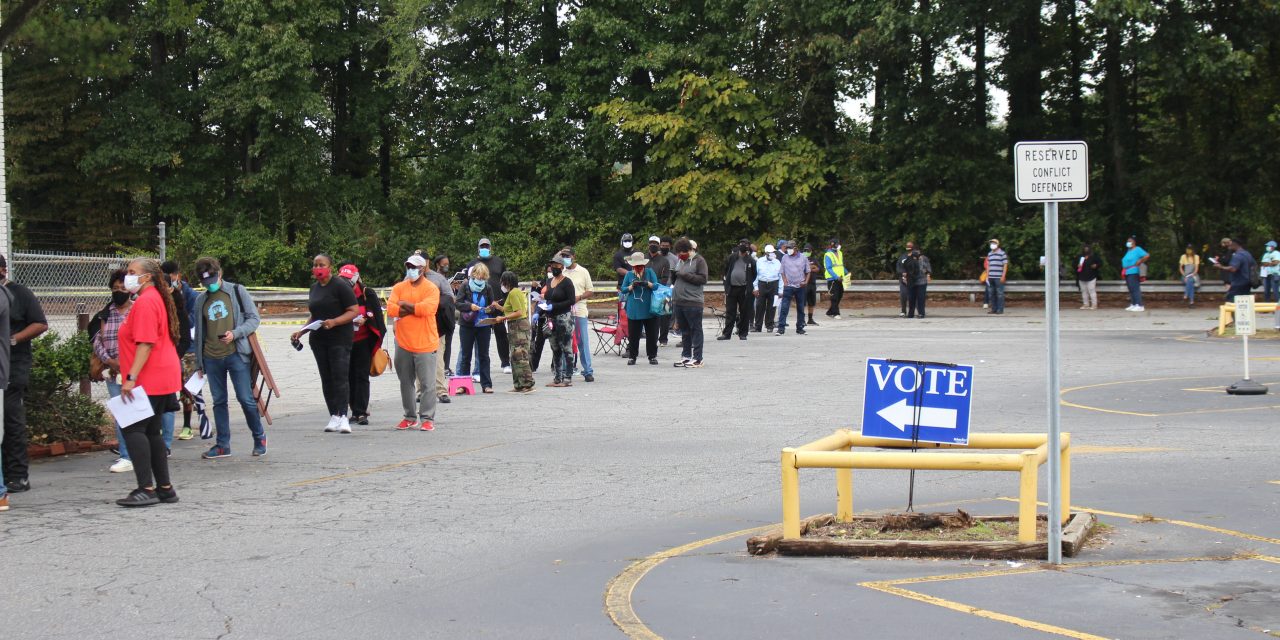 As the early voting period in Georgia kicked off this week, many took to the polls to perform a ritual with which they’re intimately familiar: voting. But with the 2020 election only weeks away, a new group of individuals will be voting for the first time in their lives: young college students.

Kynndal Oliver (24C) was one of the students who filled out a form. A Mississippi native, Oliver previously had little exposure to politics before arriving at Emory. For her, registering to vote was a stressful task.

“Coming from being surrounded by a lot of people who weren’t concerned with voting, and now … hearing everyone, for the most part, knows about their role in politics … kind of gave me some of the anxiety,” Oliver said.

Muriel Statman (24C), a Young Democrats of Emory first-year representative who registered to vote in Georgia this past summer, also called the experience “overwhelming.”

“A lot of people share this feeling where you don’t know where to start,” Statman said. “Registering to vote seems like a huge mission. Once I made that first step, I was able to feel a lot more calm about it.”

President of Fair Fight Emory Alexis Greenblatt (21C) has witnessed many seniors registering to vote. These students were first eligible during the 2018 midterm cycle, which may have impacted their decision to register, she said.

“I don’t think they realized it during the midterm election because if you’re not super involved in politics, you don’t really pay attention to those elections,” Greenblatt said. “Whereas the freshmen or sophomores are being thrown right into it, and they feel that sense of urgency more than my class did when we were sophomores.”

The Impact of Social Media

Social media platforms will play an important role in an election during a pandemic, as a means of spreading both messages and disinformation. Facebook recently announced a ban on political advertising after polls close on Nov. 3.

Most members of the Class of 2024 were in high school for the last two major election cycles in 2016 and 2018, where the impact of social media was evident.

For students who are first-time voters, information about elections and voting is ubiquitous.

“There’s definitely a need for balance,” Statman said. “For me, the overwhelming feeling came from scrolling from story to story and seeing so many different sources with different information.”

Statman first entered the world of voting and politics in high school, crediting her experience watching the 2016 presidential election results as the turning point for her decision to increase her political involvement.

Zach Barry (24C), a first-year representative for Emory College Republicans, said that social media has driven an increased “emotional attachment” to politics among the student populations, adding that while emotions always factor into politics, he believes at times they take away from the issues at hand. 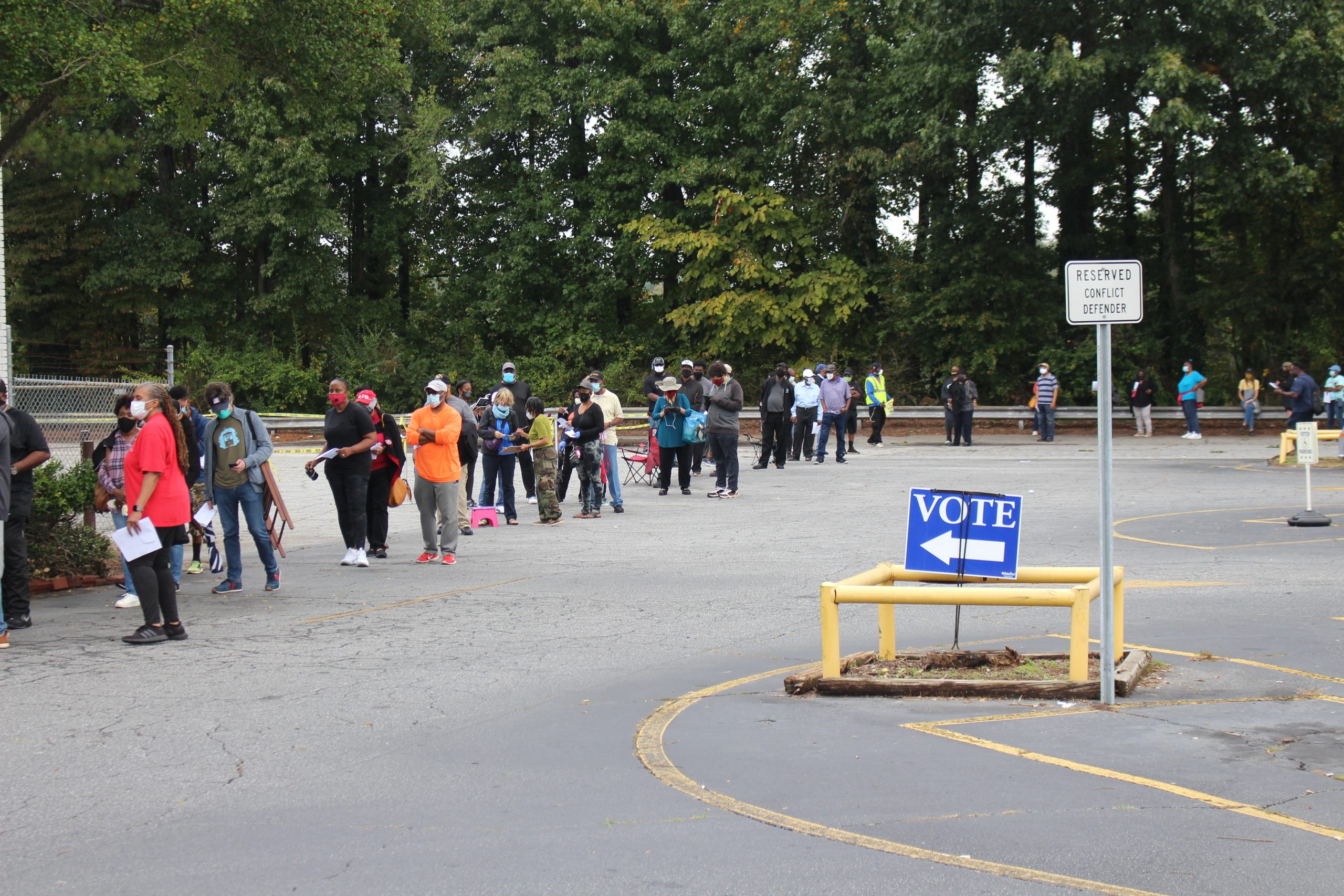 Voters line up at the DeKalb County Elections Office to cast their ballot on the first day of early voting./ Isaiah Poritz, Executive Editor

The University’s decision to not institute a University-wide holiday on Election Day and instead leave it to individual college deans drew mixed reactions from students.

Brandon Jacobs (24C), a first-year representative for Young Democrats of Emory, believes such a holiday is part of Emory’s role in its community.

“If a school encourages engagement in their community, there’s no better way than voting,” Jacobs said. “If that’s really our emphasis as helping and teaching, then there should be a free day at least so you can go and vote. If your school isn’t helping you, they aren’t serving a purpose.”

Eric Kovarsky (24C), a first-year representative for Young Democrats of Emory, said that the lack of an early voting location near Emory’s campus adds to the difficulties students face.

“You want to go vote, but you don’t want to go drive as far as the DeKalb election office or other locations,” Kovarsky said. “So you go and vote on Election Day but everyone votes on Election Day. What if they have an essay due the next day or they have a class in an hour?”

Following the start of early voting on Oct. 12, the Emory Votes Initiative announced on Oct. 13 that it organized shuttles to the early voting location at Agnes Scott College. Shuttles will be available on multiple days this month by sign-up only.

Members of student campus political organizations all stressed the importance of down-ballot races in Georgia, most notably that both of Georgia’s U.S. Senate seats are on the ballot. Barry called the lower-ballot races “exceptionally crucial,” saying that the candidates people vote for in local elections are more often those who align with their beliefs and issues.

“In my honest opinion, local politics is more important than national politics,” Jacobs said, adding that his work in creating a pamphlet about down-ballot races intends to inform students of their importance. “The more people know about politics, which comes from civic engagement, the better communities usually are.”

Jasmine Jaffe (22C), president of Emory College Republicans, stated the club intends to keep the presidential election on the “back burner,” adding that they support several down-ballot contests. There are no plans to endorse any candidates, Jaffe said.

Expectations and Experiences of Voting

The COVID-19 pandemic altered many aspects of the election this year, particularly through the significant increase in votes cast by mail. Georgia county election offices have received over 262,000 absentee ballots so far, with nearly 1.5 million voters requesting absentee ballots. In contrast, the 2016 election saw 202,500 total absentee ballots sent.

For Daniel Ren (24C), this November will mark his first time voting in a general election but not his first time voting. Ren, a registered Republican, voted in person during the primaries earlier this year in his home state of Minnesota, which occurred just prior to the state’s lockdown.

“I just walked in and out in less than five minutes,” Ren said. “There was no line at all, which was a pleasant surprise. I expect the presidential election to have lines.”

For Oliver, the prospect of voting for the first time elicits images of “lines and waiting, kind of like test-taking.”

Oliver’s prediction of what early voting would look like wasn’t far from reality: as early voting began in Georgia, voters faced long lines across the state due to issues with check-in computers used at polling stations. Some reported waiting up to 11 hours to vote in person.