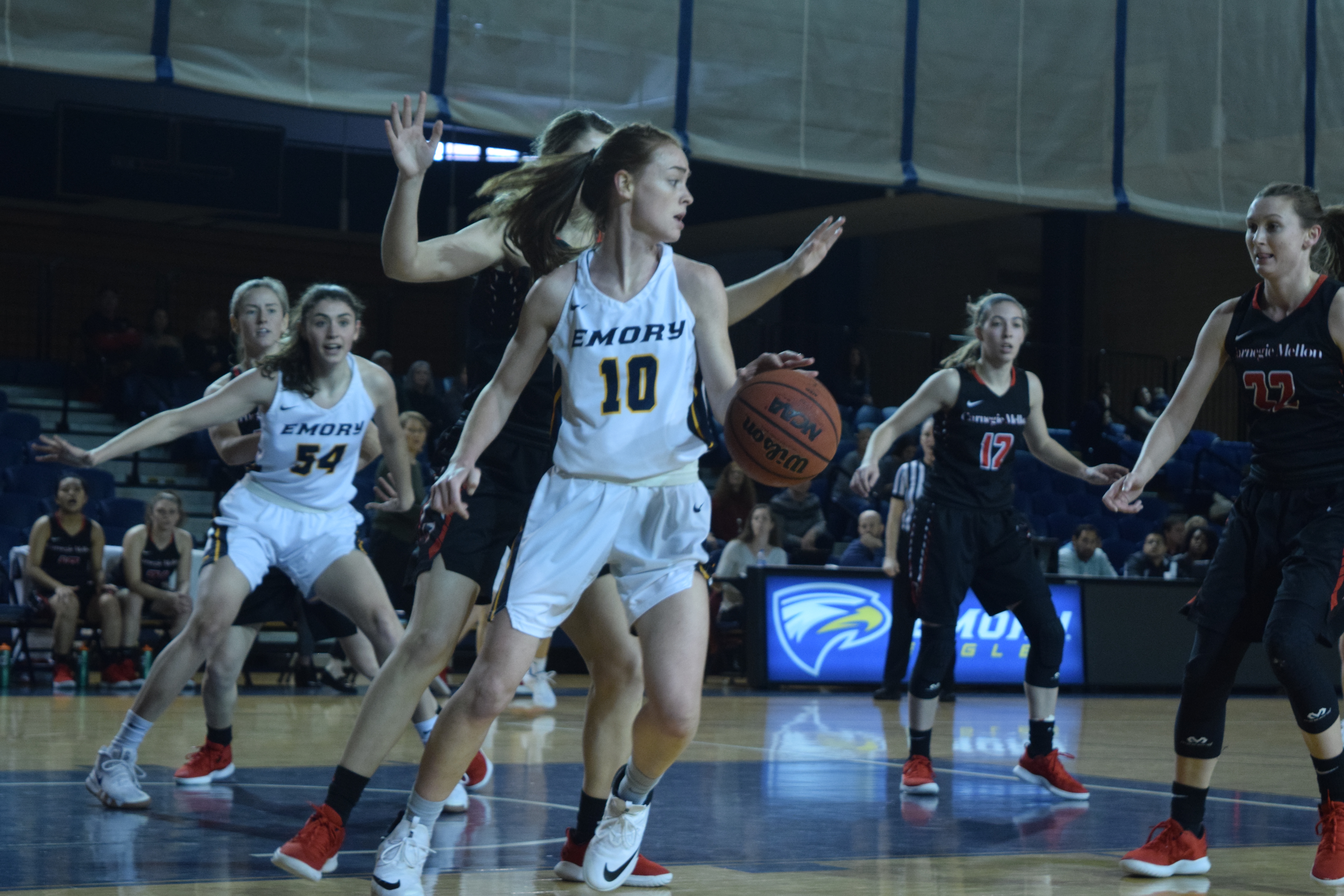 Prior to the start of the 2021 season, the last time senior forwards Anna Arato and Tori Huggins played a college basketball game was Feb. 29, 2020 — a couple of weeks before the pandemic abruptly terminated their sophomore season. At the height of the pandemic, their coaches were prohibited from mandating basketball-related activities and Emory’s indoor campus facilities were closed.

So to preserve team culture and camaraderie, Arato and Huggins took action, designing conditioning workouts for the team, purchasing a group guest pass to LA Fitness and donning gloves and jackets to sweep outdoor courts clear of debris for pickup games in the middle of winter.

Staying in shape and keeping their skills sharp over the past couple of years was important, but Arato said the biggest challenge was initiating essentially two freshman classes into the team’s culture, since the current sophomores were robbed of a normal first-year experience.

“Last year, obviously, was very hard,” Arato said. “There’s so few of us [upperclassmen], so we have to be leading by example, doing everything right. It took a lot longer for [the underclassmen] to really get it, to get the ‘why’ behind why we do something.”

The team has a dearth of freshmen and sophomores, who claim nine spots on the 15-player roster. Huggins, however, feels that the team’s commitment to adhering to their normal practice schedule as much as possible has prepared all the younger players to meet the standards of Emory basketball.

“A big part of our sophomores stepping into this year being ready was the fact that we did a lot of workouts on pretty much the same schedule we would have done in a regular year, just outside of [an Emory] facility,” Huggins said. “We wanted to set an example as soon as they came into the program.”

Head Coach Misha Jackson, who is in her third season at the helm, praised the upperclassmen for prioritizing team gatherings and practices in far from ideal conditions.

“They took to heart last year staying together,” Jackson said. “It just shows the dedication to their craft and to their sport. Maybe we weren’t practicing like we were wanting to, but they were still going to make sure they spent time with one another. That aspect has been huge because it pays off on the court for us chemistry wise.”

Their efforts certainly appear to be paying off, as the Eagles have compiled a 6-4 record as of Jan. 8. Jackson said the underclassmen’s preparedness has been essential to the team’s success, as she can rely on 10 to 12 players seeing action in any given game.

“That’s something we were always excited about as coaches because we knew how much depth and talent we had,” Jackson said. “With our style of play of playing up-tempo, it’s very important [to have depth] because we want to be playing a lot of players. It’s exciting.”

The juniors and seniors may be outnumbered on the Eagles squad, but they are the players most often appearing on the stats sheet. Junior guard Claire Brock leads the team in scoring (15.1 points per game) and free throw percentage, going 27 out of 28 from the charity stripe. Despite being a smaller player, Brock said she doesn’t hesitate to have a “shark mentality” when driving to the basket because she knows her team supports her being aggressive.

Ironically, while Brock’s bread-and-butter has become the layup, Huggins, who stands at 6’1”, has been deadly from three-point range. Huggins’ team-best 8.2 rebounds per game are hardly surprising for a player of her stature, but her ability to shoot 55.6% from beyond the arc is impressive. She said the team’s encouragement keeps her confidence high, allowing her to be an offensive threat from anywhere on the floor.

“We create the type of chemistry on the court where every three I take, I know that my teammates have my back and they want me to be shooting that shot,” Huggins said. “I have all the confidence in the world that when I’m taking good shots, we’re gonna get the results that we want.”

Brock and Huggins have both seen a noticeable increase in playing time, but Arato has logged the most minutes of anyone on the team at 28.8 per game. She is also scoring 12.6 points per game and has started all 10 of the Eagle’s contests this season. Although Arato welcomes the opportunity to play more, she said that her increased presence requires that she pace herself physically and “play smarter,” namely by avoiding picking up too many fouls early in the game.

“I’m going to definitely have to prepare my body,” Arato said with a laugh. “There was a big difference from my sophomore year when I was younger and fresher and averaging 20 minutes a game to now. I don’t think it changes my mentality a whole lot . . . I think it just goes back to confidence. If you’re on the court, it’s for a reason.

In the 2019-2020 season, the Eagles finished UAA play tied for second with a conference record of 10-4, but were not selected to compete in the NCAA Tournament. Their last berth was in Arato and Huggins’ freshman year in 2019, when the Eagles suffered a heartbreaking 57-54 first-round loss to Trine University (Ind.). Arato, Brock and Huggins all agreed that part of their leadership role is cultivating a “championship culture” that will carry the team to a NCAA title, a sentiment with which Jackson wholeheartedly agreed.

“We want banners,” Jackson said. “When you’re at Emory, you’re not here to be mediocre. Winning seasons aren’t good enough. You see our hallways, you see the trophies, you see All-Americans on those plaques. That’s the expectation for Emory Athletics, and so we have those same expectations for ourselves.”

Jackson, who led the Eagles to the Sweet Sixteen as a player in 2013, emphasizes to her players that championship-caliber teams perfect the finer details and take the season day-by-day. As long as the Eagles focus on the small victories — running drills in practice without a hitch, keeping the energy high, diving for loose balls in games — everything else will fall into place.

“When you play against pretty much every team we play against, you have to execute, you’ve got to do your job,” Jackson said. “I write on the board before every game: ‘Keep it simple and do your job.’ If we do those things, and those are all really small things, the winning takes care of itself. It’s a byproduct of those things.” 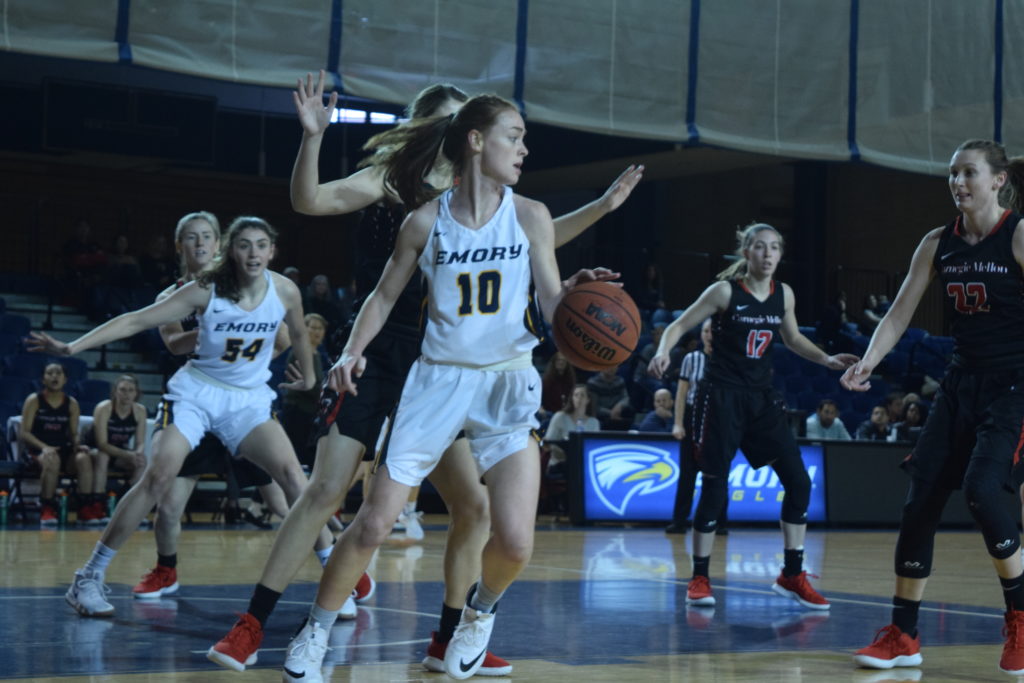 Former Emory basketball player Erin Lindahl backs down a Carnegie Mellon player in the post in a 2019 matchup. The Eagles are ready for the start of UAA in the 2021-22 season. (Sarah Taha/Former Staff) 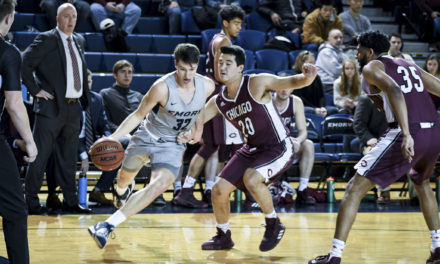