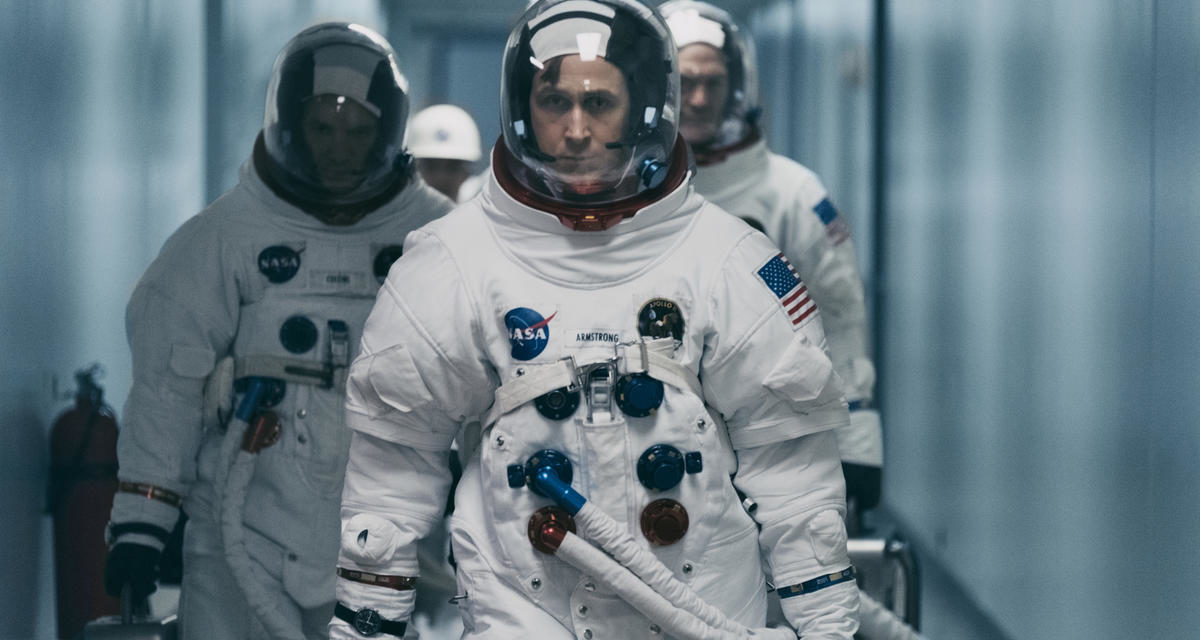 Throughout history, brave explorers have pushed beyond the limits of the known world to discover new lands. In the 20th century, the space race saw a giant leap in exploration when Neil Armstrong and Buzz Aldrin became the first people to land on the moon. “First Man,” starring Ryan Gosling as Armstrong, depicts the grand story about one of mankind’s greatest historical achievements — the 1969 moon landing — in a beautifully constructed and gripping narrative that ultimately fails to strike the potential emotional strings.

In an iconic tale of men who pushed the boundaries of human achievement to new heights, the film does a brilliant job setting up the conflict between man, nature and technology. However, it underwhelms by failing to deliver a final poignant punch.

Beginning with documentary footage from the moon landing, the film wastes no time in introducing the characters and the setting. Director Damien Chazelle does not shy away from showing the intensity and brutality of NASA’s mission through adroitly placed scenes of news reports, radio commentary and protests. Lagging behind the Soviet Union in the space race, NASA and the American government came under increasing pressure from the American people regarding the mission’s feasibility, as well as their capability to manage the pressure. The public’s unrest regarding their taxpayer dollars paying for a seemingly impossible and unnecessary task is juxtaposed against the internal turmoil within NASA and the astronauts’ personal lives. Death and injuries run rampant, along with growing discontent and stress in the protagonists’ minds, as they fail in their initial attempts to reach the moon.

The plot weaves together several narrative threads to show how the socio-political conflict in the background affects the protagonists. Here, Gosling truly shines in his performance, embodying the role of the silent masculine authority attempting to appear strong and unfazed. Yet he succinctly conveys the Armstrong’s suffering, losing friends, colleagues, neighbours — and even his two-year-old daughter to a tumor — on his path to the lunar surface.

In contrast, Claire Foy delivers a frustratingly wooden performance as Janet Armstrong. This may partially be because Chazelle wanted Gosling to be the sole focus. However, while it suits certain aspects of the story, at other times Foy’s acting is incredibly lackluster. Furthermore, her character’s unwillingness to explain Armstrong’s absence and potential death to their children feels uncharacteristically forced and unnatural — it seems unlikely that a mother would go against her maternal instincts and not attempt to comfort her children in the face of distress.

That’s not to say that the movie is entirely devoid of emotion. A scene involving Armstrong on the moon, where he reminisces over a certain personal tragedy, tugs the audience’s heartstrings and is arguably the most touching scene in the movie. It is one of the few moments where one can feel the pain and sacrifice that Armstrong has suffered. Another notable scene is when he stands silently beside a swimming pool in absolute silence, staring at the moon with a haunted expression, after hearing about the death of a fellow astronaut, who was a close friend and neighbour. Gosling skillfully embodies Armstrong and executes the role to almost utmost perfection.

Unlike other space movies that choose to exhibit the serene beauty and vast emptiness of the universe through long, still pans, Chazelle opts to film a majority of the movie through extreme close-ups and shaky camerawork. This technique heightens the tension within the story, as the astronauts’ expressions are extensively emphasized, making the experience a little more immersive. It gives audiences an indication of the sensation of being inside a cramped space shuttle. Chazelle exploits the IMAX cameras to their full potential to provide the audience with some stunning visuals, particularly in the scenes on the moon.

“First Man” excels in its technical aspects. The CGI in the movie looks real, and it is difficult to notice any cartoon-ish graphics. The score, composed by frequent Chazelle collaborator Justin Hurwitz, is absolutely phenomenal and complements the events of the film perfectly. Orchestral music with loud horns during the triumphant liftoff scene, along with the absolute silence immediately after, are followed by slow, sentimental music that brings some much-needed depth into the movie. Yet music cannot accomplish the task alone. Ultimately, the script and some individual performances do not build on the narrative’s momentum.

“First Man” is a well-crafted film, with mostly exceptional performances from the cast. However, it lacks the emotional punch that could have elevated the movie to a higher level, and thus fails to leave a lasting impact. The pacing is a little amiss, with the third act feeling slightly rushed and not providing enough time to savour the fantastic cinematography of the moon scenes. “First Man” leaves the audience a little unsatisfied and ends on an underwhelming, rather than triumphant, note.