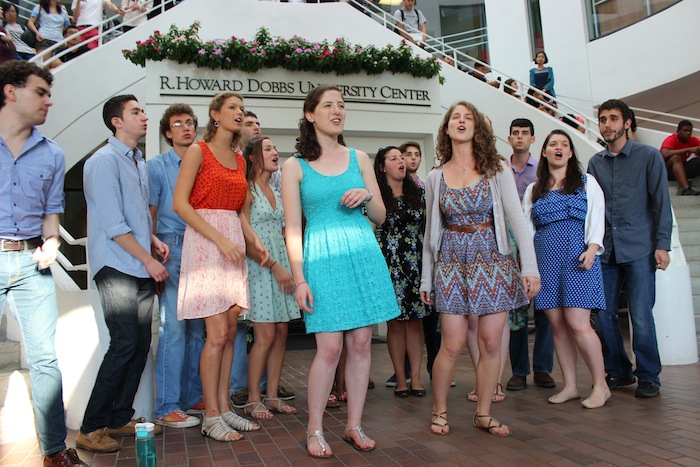 Students rushing off to Music Midtown this weekend stumbled upon a musical performance on Emory’s campus highlighting some of our finest singers – sans musical instruments.

Last Friday, The Dobbs University Center (DUC) Terraces hosted the first First Friday show of the year, featuring Emory a cappella groups AHANA A Cappella, Aural Pleasure, ChaiTunes, Dooley Noted, The Gathering and No Strings Attached. The show displayed Emory students’ musical talents, and the feeling of community was obvious in the crowd’s anticipation, even before the start of the program.

The crowd of students and faculty eagerly awaited the start of the performance, filling the Terraces as well as the stairs behind the performers.

The groups performed a diverse array of songs in multiple genres and styles, from current hits such as The Gathering’s upbeat rendition of Sara Bareilles’ “Brave” to classics such as No Strings Attached’s smooth arrangement of Frank Sinatra’s “Fly Me to the Moon.”

Highlights included Aural Pleasure’s execution of Boyz II Men’s “I’ll Make Love to You” and Dooley Noted’s interpretation of Andy Grammar’s “Keep Your Head Up.” The Aural Pleasure soloists, B-school senior Sami El-Kebbi and College freshman James Kennedy, had the audience swooning and laughing within the span of a single song, while Dooley Noted’s performance featuring College sophomore Henry Hays got everyone clapping along.

This was the first time that the 2014-2015 members of each group performed together. Leaders proudly introduced the new members, whose nerves and elation were clear during the performances.

While the musical prowess of the groups is evident, it is clear that there is more to value at the First Friday shows. Since its inception in the early 2000s, First Friday has brought the Emory community together.

“First Friday was started as multiple a cappella groups began to pop up on campus and the leaders of [No Strings Attached] felt it would be great to bring them all together for a showcase on the first Friday of every month,” No Strings Attached President and B-school senior Jason Charles told the Wheel in an e-mail. “It became a tradition and crowds grew to the hundreds fast. First Friday gives a cappella groups a chance to show off new songs, perform crowd favorites and promote their concerts and various events too.”

The entire show had the audience smiling and supporting the musicians, shouting encouragement to friends and cheering for the groups.

For ChaiTunes President and College senior Katy Heath, her first First Friday helped her find a place at Emory four years ago.

Although some claim that Emory lacks school spirit, Aural Pleasure President and College senior Tom Cassaro quickly pointed out evidence to the contrary at First Friday.

The pride in Emory University and in the arts shined in the six groups’ enthusiasm and passion.

College freshman Geoffrey Solomon, new to Dooley Noted, fulfilled a nearly lifelong dream by performing in his first First Friday. Since the third grade, he has wanted to be a part of the a cappella magic.

“I was a little nervous,” Solomon admitted about his First Friday experience. “[But] as soon as I got on stage and saw smiling faces, I was able to let [the nerves] go.”

Solomon cited the “warm, fuzzy feeling” that he experienced performing as proof of the friendship and communal feeling at Emory.

“The Emory community is very accepting,” he shared excitedly. “It’s great to feel onstage, as well as just walking around campus.”

Not only do the singers feel the welcoming environment, but the audience feels it as well.

“On the whole, all of the groups were amazing, and the whole atmosphere was [amazing] too,” College freshman Avani Jalan said.

To sum up First Friday in a word?

This year’s first First Friday performance shows promise for all the a cappella groups, as both new and old members demonstrated their excitement and willingness to grow. Filled with passion, musicality and community, First Friday is an hour of a cappella that you don’t want to miss.