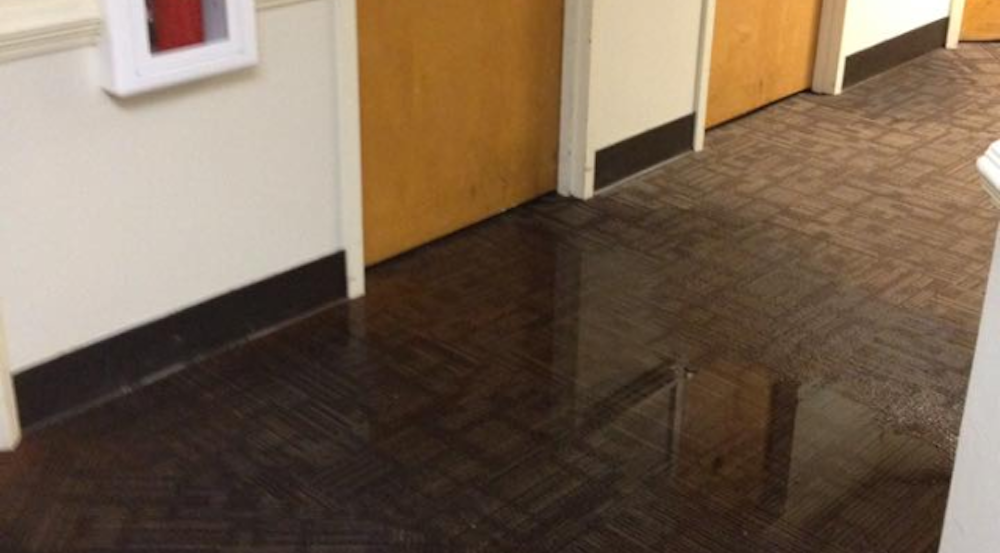 Late Sunday afternoon, fire alarms sounded on the seventh, eighth and ninth floors of the Clairmont Campus Tower Apartments. Residents soon discovered the alarm had not been a drill or prank: a grease fire on the eighth floor caused sirens to signal nearby residents to evacuate and sprinklers to go off flooding nine floors of the Tower.

Residents on floors in proximity to the affected area were able to safely evacuate the building. Soon after, a fire truck and police appeared on the scene. Firemen, fully geared and carrying axes, entered to inspect the apartment complex.

The basement of Tower Apartments was flooded with water released by the sprinkler system, with a few inches of water on the ground and more falling from the ceilings, according to Tower resident and College junior Sean Healy, who evacuated with other students.

“[It] was like another scene from a horror movie … instead of blood, it was water.” — Sam Healy

Healy initially considered the warning to be a drill and nonchalantly began to exit the building, but as he entered the stairwell, he learned the immediacy of the situation.

The kitchen area sprinkler was able to successfully extinguish the fire, although many apartments, offices and hallways faced water damage, Residence Life and Housing Associate Director of Facilities and Operations Jeff Tate said.

Tate noted that the major water damage, however, occurred in the apartment where the fire began and in the one directly below it.

Healy happened to be one of the residents whose apartment suffered from major water damage. When he finally reached his apartment, he was greeted by a giant puddle of water seeping from underneath his front door, he said.

“[It] was like another scene from a horror movie … instead of blood, it was water,” Healy said.

Similar to the basement, his kitchen and foyer were flooded with water. He said that water trickled from the cabinets, filled his pots and pans and the stench of mold and dirt filled the air.

However, not all resident experiences were so dramatic. Tower resident and College junior Yimeng Li faced no damage to her apartment. Her only wish is that she had more information about how long it will take before the clean-up is finished.

Despite the damage, Residence Life and Housing was quick to accommodate residents and to begin restoring the building, Tate said. Later that night, staff inspected the damaged apartments and the restoration team began repairs.

Tate explained that this week Full Circle Restoration, a Georgia-based disaster recovery company, has been working to restore the building.

Full Circle has been replacing carpet, preventing mold, repainting walls and placing dehumidifiers and blowers in water-damaged apartments and hallways.

Tate estimates that it will be a couple of weeks before the building is completely restored. He explained that cleaning grease from ovens as well as the use of fire extinguishers, located under kitchen sinks, can help residents to prevent fire and water damage in the future.

Overall, Healy said that he is pleased with the how Residence Life and Housing is handling the situation, and will be happy when his apartment is fully restored.