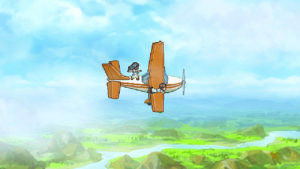 When Freebird Games released “To the Moon” in 2011 — a plot-driven, point-and-click adventure game — it was the beginning of an indie renaissance. Its touching story about a dying man’s regrets and its intelligent dialogue made the simple 16-bit graphics come to life. Games inspired by “To the Moon” such as “Rakuen” and “Life is Strange” still continue to invest all of their time in character development rather than in actual gameplay.

“Finding Paradise” is the second episode in the larger “To the Moon” universe and acts as a sequel to both “To the Moon” and Freebird Games’ other indie title, “A Bird Story.” Like “To the Moon” in particular, this game is a cathartic rollercoaster that thoughtfully explores the nature of reality and memories. The genuinely funny dialogue compensates for the more depressing moments of the game, ensuring that for every heartbreaking monologue, there is a goofy “Godfather” parody. Though the writing is nearly faultless, Freebird Games should have properly identified the mechanical flaws of the original game and at least tried to fix them as they probably should have done in the six years they had to make “Finding Paradise.”

In the world of “Finding Paradise,” a company called Sigmund Corp. sells technology that gives dying patients artificial memories which can make any of their dreams come true. For example, i a patient wishes to be rich, then their memories would be altered so that they perceived themselves as having lived a life of wealth. You control Sigmund Corp. employees Eva Rosalene and Neil Watts as they enter the mind of dying patient Colin Reeds — the lead character from “A Bird Story.” The pair are tasked with traversing Reeds’ memories and discovering his wishes. The only condition is that they preserve Reeds’ memories with his family as a courtesy to his wife and son.

What makes the game so difficult to put down, even from the start, is the repartee between Rosalene and Watts, with Watts as the fool and Rosalene the straightman. In the more emotional segments of Reeds’ memory — such as an argument with his wife about signing up for Sigmund Corp.’s service — a timely, tactless joke by Watts helps deflate the tension. At the same time, the subtle exploration of how Watts and Rosalene have desensitized themselves to their job adds an extra, muted element to the characters within the game. Fans of the “Blade Runner” films will find the way in which the game approaches these questions poignant and satisfying.

While the game could be criticized for its lack of gameplay, its tunnel-vision emphasis on plot means that there are no distractions from the story being told. Were the creators to include a turn-based battle system like a Japanese role-playing game (JRPG), there would have been a disconnect between the story and the game itself, which would have interrupted the plot and character arcs. That said, the only gameplay involves moving from point A to point B and — at the end of each episodic memory — a Candy Crush-esque match-three puzzle which unlocks a memento that allows you travel further into the crevices of your patient’s memories. It gets repetitive quickly and is unaided by your character’s slow, four-directional movement, which makes even walking monotonous. The mechanics of the game seem particularly regressive given that “To the Moon” had similar criticisms about its lack of gameplay and slow movement and the developers had six years to remedy them. At the very least, they should have added the ability to run, just to speed up the sluggish play between key moments in the game.

I was never too discouraged by the slow movement since the soundtrack provided all the entertainment I needed. Music plays an integral role, with Reeds’ ability to only play scales on his cello incorporating itself into both the plot and the soundtrack. The soundtrack distinguishes itself from “To the Moon” in a way in which “A Bird Story” could not, as director and composer of Freebird Games Kan Gao explores other musical avenues beyond the piano. The song “Paradise,” in particular, exemplifies Gao’s use of cello scale progressions in conjunction with the guitar.

“Finding Paradise” is a worthy successor to “To the Moon” in its deep exploration of characters complemented by its clever writing. Though the criminally underpowered mechanics and graphics of RPG Maker might make its delivery seem disingenuous, even the slight furrowing of a character’s pixelated brow makes the game seem more realistic than even the most graphically accurate game in the market. Though I wish it could have improved the faults of “To the Moon” — notably the lack of gameplay and unpolished mechanics — the new perspective it gives to the ethics of memory manipulation in conjunction with its rich, cello-heavy, atmospheric soundtrack distinguishes itself from its predecessor.

If you have $9.99, five hours to spare and a modicum of human emotion, I encourage you to play “Finding Paradise,” especially if you have played “To the Moon.” Just be sure to have a box of tissues on you.