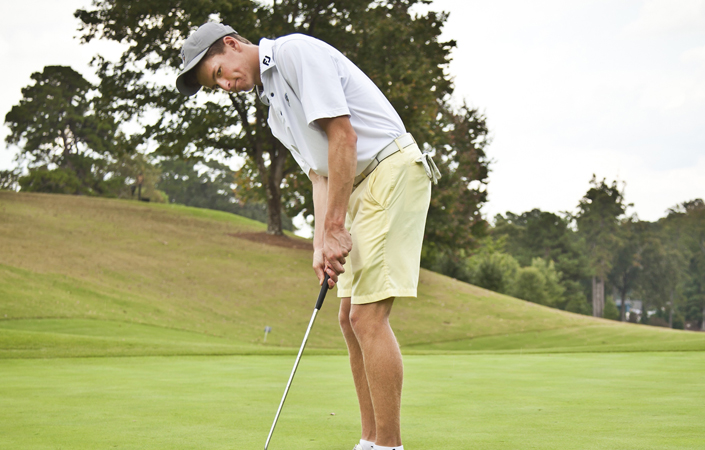 The Emory men’s golf team claimed its first top-three finish of the fall season at the Golfweek Division-III Fall Invitational at Raven Course in Sandestin, Fla., Oct. 9 to 11, finishing third out of 19 teams.

What seemed like a damaging round Monday with the Eagles looking far outside the top three was followed by a tie for the final round’s best score Tuesday. After moving up four spots on the leaderboard, Emory (+19) placed behind University of Texas at Tyler (+2) and Rhodes College (Tenn.) (+16), which finished first and second, respectively.

In a similar manner to Oct. 3 and 4 Oglethorpe Fall Invitational, freshmen Chuck Isgar and Matt Organisak led Emory’s team in the 54-hole tournament. Both players carded a three-round score of one over par, good enough for a tie at fifth overall. Isgar was Emory’s strongest golfer Sunday and Monday, coming into the final round at three under par. Despite a triple bogey on the ninth and a double bogey on the 11th, Isgar salvaged a top-five finish. Organisak improved as the tournament progressed, finishing with a better score each day. His score of two under par Tuesday helped lead the Eagles to their best finish of the season.

Isgar relished the opportunity to impact the team’s performance in his second collegiate tournament.

“I was able to bring my game and contribute to a really strong team performance,” Isgar said. “This was a really great way to top off our [Fall 2016 season], and I am proud of how I was able to help lead the team the first two days.”

Emory will be coming off its top two finishes when the team takes on its final Fall 2016 tournament. Sjoberg expressed his optimism about the team and its performance in that upcoming tournament.

“I think we’re right on track,” Sjoberg said. “It’s been a very good fall. The last tournament is a B-team event. We get to have eight different people play, which is great.”

Isgar, who has finished in the top-10 in back-to-back weeks, is looking forward to both the team’s upcoming tournament and the spring season.

“I hope to continue to be a major contributor to this team,” Isgar said. “I saw a lot of positivity the past two weeks. I think it is indicative of what I’m able to do and where my game is at right now.”

The Eagles will cap off the Fall 2016 season at Chick-fil-A Invitational at Stonebridge Golf Course in Rome, Ga., Oct. 17 and 18.