Can’t tell whether or not the world is crumbling around you? Look no further than Hollywood for the answer. The popularity of different movie genres reflects America’s sentiments, whether we notice it or not.

If you look at successful Hollywood Blockbusters from the past three or so years when turmoil pertaining to terrorism and political discourse really started to gain speed, you will see a trend. There are three types of movies we turn to for comfort, and each reflects our deep-seated anxieties.

First, space exploration movies like Passengers, Star Wars and The Martian. Next, you have superhero movies. Anything with a Marvel or D.C Comics stamp falls under this category, along with others. Lastly, we have our token America-Wins movies. These movies, such as Sully, Bridge of Spies, London has Fallen and Patriots Day — which depict instances when America overcame threats, often foreign. Alien invasion movies such as Independence Day toe the line between alien or space exploration and America-Wins.

You could easily argue that these movies simply have interesting plots, computer-generated images galore and A-list actors (looking at you, Tom Hanks) to draw crowds. Yet they also have so much more to tell about what is worrying us about the world and how we wish we could fix it.

Many are more worried than they know. But after watching Bridge of Spies or London Has Fallen, you might be able to better pinpoint those anxieties. When you leave that theater, adrenaline will course through your veins, telling you that we have the power to overcome these obstacles, and that we historically have. Seeing your anxieties resolved on the big screen can bring a kind of unexpected hope. Watching America go through hideous and often realistic hardships but always emerge victorious is comforting.

The same goes for superhero movies. Who wouldn’t be comforted when watching Thor and Captain America (honestly, his name is Captain America) fight off evil so we don’t have to? The idea of superhumans swooping in and saving the day is what we all need right now: a preternatural fix to our seemingly insurmountable problems. Everybody would sleep better knowing that the Avengers were tackling ISIS for us; handling monstrous threats is what they do best. CIA or operative movies such as the Mission Impossible franchise or Expendables fill this void in their own right, for the more faith we have in our real life agencies, the better we feel. We all hope that behind the scenes everything is under control.

Superheroes’ popularity is not new. During the Great Depression and World War II, superheroes first arose to offer Americans a way to escape their hellish surroundings. Captain America, Superman, Wonder Woman and Batman all were conceived to combat the anxiety of that time over 75 years ago. They are even more popular today for the exact same reason: we need heroes to boost our morale.

Similarly, alien invasion movies like Battleship and Independence Day where America bands together and uses handsome, intelligent agents to work our enormous guns are obviously patriotic dreams. They show that our intelligence and technology can overcome anything, even giant alien ships with advanced technology. They will have you wearing an American flag as a cape and screaming the national anthem, because America has triumphed yet again through our grit and hard-working citizens.

Space movies, however, are a bit different. They show us struggles that mirror our own on a larger, intergalactic scale. Watching the Resistance fight for freedom in Star Wars gives us hope about our own capabilities. By making the franchise’s problems span galaxies rather than countries, our own problems look far more conquerable.

No matter the genre, our anxieties are addressed in film. Whether it is the fear of attack, failure or global warming, we go to the movies to escape our reality and watch handsome men and beautiful women fix our problems on the silver screen. We just have to remember that even though Tom Cruise has saved everybody (again), our problems are real and must be addressed outside the theater.

Landscape Program is a Bandage, Not a Fix for College Admissions 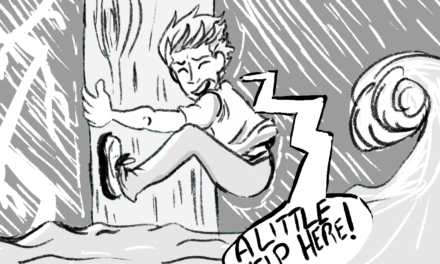