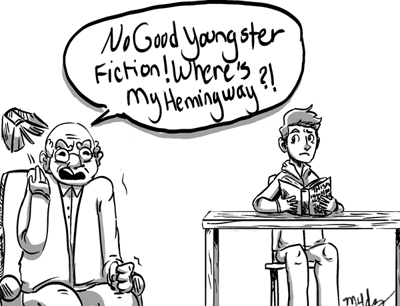 How often do we hear the complaint “there just isn’t any good fiction written these days.” Usually this comes from old, boring people and is (rightfully) followed by lamenting the popularity of titles such as Fifty Shades of Grey, The Hunger Games and Twilight.

There are two faults with this approach. The first is that people have complained about a lack of good, contemporary fiction for basically as long as fiction has been around. When authors like Ernest Hemingway, William Faulkner and John Steinbeck were writing at the same time, people pined for the days of Twain and Dickens. If one looked at the year’s best-selling novels when any of these authors were at their peak, there would be a surprising amount of mass-produced pulp fiction at the top.

The second problem with the idea that there are not any good books of our time is that, well, there is a lot of great fiction being written right now.

Junot DÃ­az, whose The Brief Wondrous Life of Oscar Wao won the 2008 Pulitzer Prize for Fiction, is arguably the most talented and important writer currently publishing. His short stories are distinctly American with their approach to immigrant life in the United States. DÃ­az has perhaps the most recognizable style of any contemporary author with frequent second person narration, swearing, humor and examination of failed romantic relationships.

Likewise Philipp Meyer‘s 2009 debut novel American Rust takes place in an old steel town in Pennsylvania and is perhaps the best look into contemporary American life since the novels of John Updike. Meyer’s second novel The Son was published this past summer and is considered a contender for the Pulitzer.

And for fans of Ernest Hemingway’s war novels or Tim O’Brien’s The Things They Carried, Kevin Powers’ novel The Yellow Birds offers a powerful account of the lasting physical and psychological brutalities of war. Powers, who served in Iraq, also addresses both the American public’s lack of shared sacrifice in the war as well as its overly romanticized and less-than-genuine support of the troops. The Yellow Birds has been considered by many to be the best novel to come out of the Iraq War.

As the American populace has become more diverse, the literature has followed suit and identity-based fiction has increased. Sherman Alexie, whose first book was published in 1993, has consistently written novels, short fiction and poetry about Native American life since then.

While his fiction is at times devastatingly sorrowful, it also frequently makes the reader laugh out loud and celebrates immense triumph with regard to Native American identity and culture.

Nathan Englander‘s fiction, primarily concerned with Jewish identity, is among the forefront of current American literature. With particular regard to the title story of his latest collection of short fiction, What We Talk About When We Talk About Anne Frank, Englander has proven himself a master of the form. Likewise, ZZ Packer’s short story collection Drinking Coffee Elsewhere is told from the point-of-view of African American characters who are generally female. One would struggle to find a writer whose style is more dynamic and whose subject matter is more relevant and memorable than Packer’s. The list goes on.

A shortage of good, current fiction is clearly not an issue, but its diminished relevance in everyday life is a very real problem. In past decades, other mediums of entertainment like cable television, fantasy football leagues, video games, etc. have taken part of the place where fiction used to reign.

These days, venues like The New York Times‘s 100 Most Notable Books of the Year, the short fiction of The New Yorker and the Best American Short Stories series have a near monopoly of which books receive critical acclaim and high sales.

Contemporary fiction has been demoted to the exclusionary moniker of a “literary community.” This distinction is tragic considering that one of literature’s primary functions is to shape public life and force a wide variety of readers to question the events of their time.

So what are some small ways for literature to have a more visible role in society? Simply support young authors by buying their books, and don’t wait to read preeminent authors who have already written their best fiction like Thomas Pynchon, Toni Morrison or Don DeLillo.

Also, always being on the lookout for good, new fiction is necessary as well sharing titles with others. After all, the other primary function of fiction is, as David Foster Wallace said, to show “what it is to be a f–king human being.”