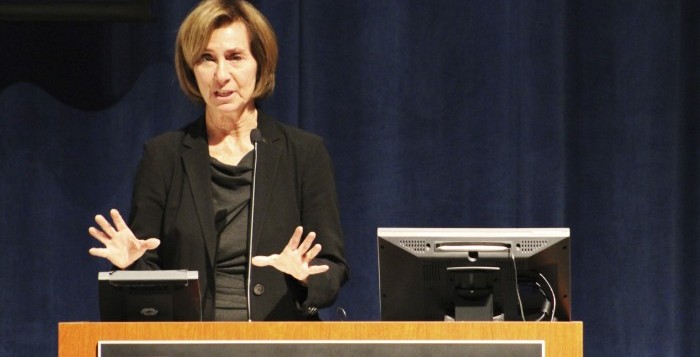 The Emory School of Law hosted a public conversation with the Vice Chair of the Federal Elections Commission (FEC). The talk was titled “The Future of Elections and Democracy.” Photo by Benazir Wehelie, Copy Chief

Emory University School of Law hosted Vice Chairman of the Federal Elections Commission (FEC) Ann Ravel yesterday as she held a public forum on the current state of money in politics, elections and democracy.

The event, attended by about 50 people, was the final leg of her tour across the country as part of an initiative from the FEC, which regulates national campaign finance, and non-government organization Represent.Us to allow for the public to voice their concerns about elections issues and have their voices heard.

Ravel, who will become the chairman of the FEC beginning in 2015, explained that the FEC was established in 1975 to “primarily level the playing field in politics” and make it fair for all people to run for office and be able to persuade people of their views.

Ravel spoke directly about the lack of trust people have in the government, citing a poll that asked citizens, “Do you trust the government to do what’s right?”

After the Watergate Scandal in 1974, 36 percent of respondents said they trusted the government. However, Ravel pointed out that when the poll was taken this past year, the results were less than 20 percent.

To address the issue of distrust, Ravel felt it was important to give the public an opportunity to speak to the FEC.

Ravel explained that she would be acting as a voice for public opinion in a larger dialogue with the other members of the FEC about the issues raised.

Throughout the forum, Ravel solicited feedback on elections policies from attendees. Rather than responding to the individuals’ statements, she listened and took notes that she said would be discussed later with other commissioners on the FEC.

The audience brought up topics such as health care and the Affordable Care Act, voter ID laws and gerrymandering. Another issue addressed was that of voters not feeling like their voices can be heard or that their votes matter given the influence of large corporations and Political Action Committees (PACs).

Sally Fitzgerald, an attendee at the forum, suggested to Ravel that the number of months for campaigning should be limited.

“The costs of campaigning are obscene and reducing the time allowed for campaigning would reduce costs,” Fitzgerald said. “The citizen doesn’t elect people to raise money, but to solve problems.”

Many members of the public expressed the need for more disclosure of campaign financing to reduce corruption.

Ravel explained that the disclosure of how much the large donors are contributing is important to understand.

The Supreme Court has agreed that disclosure is necessary so that voters know who are supporting various candidates. For smaller donors and in situations where there isn’t an important need to know, full disclosure isn’t as important, Ravel expressed.

Will Mason, a member of Move to Amend Atlanta, a coalition of individuals committed to social and economic justice, attended the public forum and voiced his opinion to the panel.

According to Communications Director Gidfar, it is rare for a high-ranking official to be open to a public forum.

“This is a great opportunity for the Emory community to take advantage of a direct line to Washington and make its voice heard,” Gidfar wrote in an email to the Wheel.